Fantasia 2015 Review: LUDO Challenges You To A Deadly Game Of Dice 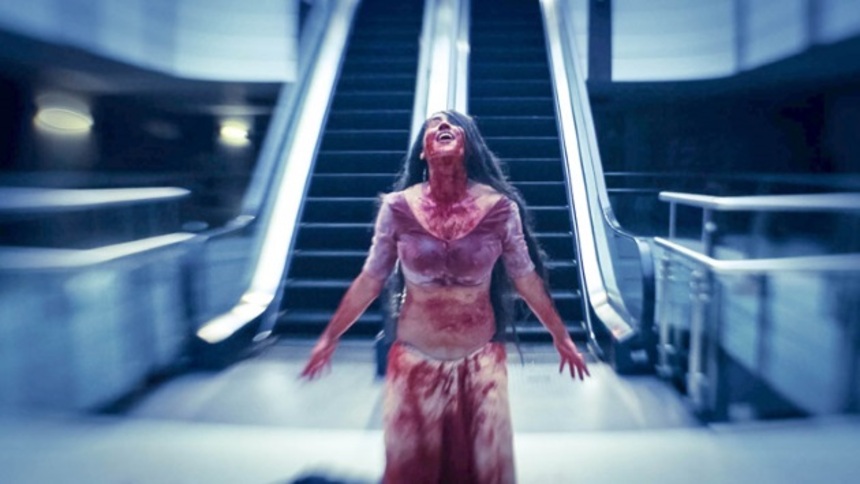 Ludo co-director Q has been a filmmaker that I've had my eye on since his brash explosion onto the international art house scene with 2010's Gandu. That film is loud, aggressive, and challenging to the viewer, in the way that the best transgressive cinema can be.

Over the years I've watched Q struggle to wrangle in that fury that he showcased with Gandu and hone in on a more focused, more direct style that still refuses to play nice with his audiences.

Tasher Desh, his second narrative film, was a psychedelic transmutation of Rabindranath Tagore's stage play by way of a diptych meta narrative that excited me for its "fuck you" attitude and guerrilla style.

This latest film, Ludo, a collaboration between Q and his Tasher Desh editor who goes by the name Nikon, inches the Bengali cinema brat even closer to being able to tell his stories, his way, while keeping the narrative more focused and less abrasive, but only slightly.

Ludo begins with a girl, Ria, getting ready for a night on the town with her best friend, Payel, in a double date. As the night wears on and the foursome drinks themselves further and further into oblivion, it becomes patently obvious that they all just want to fuck, and the dance of seduction turns into a dance of desperation. They walk the streets of Kolkata looking for a venue in which to satisfy their carnal desires they are turned down at every local motel because none of them are married until eventually Ria and Payel, being pragmatists and sexually liberated women of the 21st century, decide to take matters into their own hands and suggest the local shopping mall. Perhaps an odd choice, but it is late, the mall will be empty, and why the fuck not?

This is when the shit begins to hit the fan.

While cavorting about in the mall the group runs into an elderly woman who entices them into a game of dice. As though they were hypnotized, three of the group join in and things start to go a bit pear shaped when the kindly older woman begins to eat one of the men after a particularly fortuitous roll. From there the film begins to spin a tale of ancient curses, man eating demons, supernatural incest, and blood. It's a bit of a harsh transition, but the twist certainly grabs your attention and opens up new doors for extreme horror in India, the kind of horror that this country has never seen.

Far from a straight linear narrative, Ludo expresses itself more as an expressionist work of art than a generic horror film. In this way, it is very much Q's work. Still abrasive and confrontational, Ludo manages to find a more palatable balance between the deliberately obtuse and intellectual stylings of its predecessors, while still delivering a solidly thrilling narrative experience. Q and Nikon are aiming for the gut here, moreso than the brain, and that is a new direction for a filmmaker who has built his reputation on idiosyncratic, cerebral films. It's a delicate mix, and Ludo is certainly the closest Q has yet come to perfecting it.

As much as I enjoyed it, this is definitely not a film for everyone, and there's no way I can fault someone for finding its unique style and structure unsatisfying. Like most of Q's other work, the film splits itself into two well-defined parts that only resolve at the film's climax. While this is not an unusual tactic, it is a uniquely Indian version in which a flashback takes up a large continuous chunk of the film's back end, rather than the more western style of cutting the flashbacks into bits and piecing them throughout the film. It is distracting, and I sometimes found myself wishing that the flashback were more broken up so as not to take too much away from the main narrative about the horny kids in the mall. However, the imagery involved in the flashback is gorgeously lurid and bloody in a way that Indian films haven't dared put on screen, so quality trumps trepidation for me.

Ludo's pacing will also throw some audiences for a loop, as we're not really even thrown any hints about the film's true path until at least 30 minutes in. It follows the classic slasher formula of kids trying to get laid, and instead ending up in pieces all over the place, but it does it in a way that deceptively sidesteps the audience's expectations, and perhaps offers a bit of a bait and switch. Personally, the sleight of hand utilized by Nikon and Q to lull the audiences into submission works for me, and I imagine that fans of more challenging horror will find a lot to like about this film.

When I heard that Q was working on a horror film I had two initial reactions, the first was was, "finally!", and the second was, "oh shit, how is he going to pull that off?" Well, I think the answer with Ludo is clear, Q and Nikon made a horror film their own way, with their own signature, and their own sensibilities clearly on view throughout. It will piss some people off, it will alienate some viewers, and it will bore some to tears. Those people who love it, however, will love it fiercely and without reservation. I obviously count myself in the latter camp.

With two solid art films in his rear view, and at least one amazing looking coming of age dirty comedy (B Naman) down the road, Q has carved himself a niche to which no other Indian filmmaker has any access. This partnership with Nikon (and honestly, I don't know who is responsible for what, but I know Q's style) is an expectation smashing thriller that will leave audiences talking, one way or another.

If Ludo is the new face of Indian horror, it's a bloody good one!

Do you feel this content is inappropriate or infringes upon your rights? Click here to report it, or see our DMCA policy.
fantasia 2015Fantasia Festivalhorrorindian cinemaludonikonQ