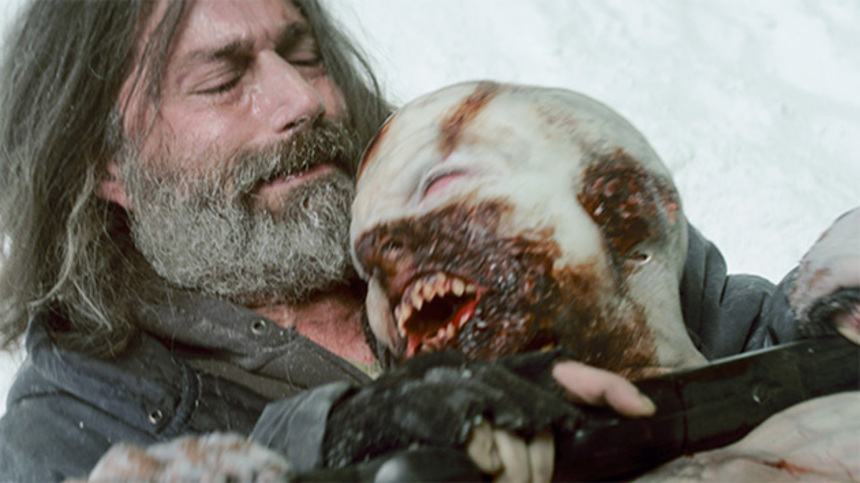 I figured if most zombie movies are going to repeat themselves I might do so as well - the genre, such as it is, is pretty tired.

More so than other subgenres of the horror field, things are usually grand and epic shoot-em-ups (replacing the Western's traditional, unreflected-upon slaughter of Native Americans with the mowing down of the hordes of undead), tonge-in-cheek comedies, or attempts to do something new and interesting with the shtick.

In fairness to Extinction, writer/director Miguel Ángel Vivas (2010's Kidnapped) is at least attempting something unique. Along with writers Alberto Marini, and based on a book by Juan de Dios Garduño, the concept takes a siege film, a family drama, an outbreak scare, and a film about self-sacrifice, and mashes it all together.

At times, it almost works.

We're introduced in the first shot to some school busses that are heading to the gate of a military facility. A baby screams, and the concerned faces of a bunch of extras and a few people you know from some TV shows look on in growing concern. In a pretty hapless demonstration of military competency the expendable soldiers guarding the bus go out on their own to "check things out", walking slowly and trying to drum up tension. Drum all you like, the tension's not there, and the audience actually laughed at the silliness of this staging.

After the carnage and escape there's an ellipsis, where now a young girl is living with her daddy, while next door another man lives seemingly as an outcast - long hair, unshaved beard, but a loyal and trusty dog. It's shifted now into a post-apocalyptic tale, where the cold has arrived and the infectious attackers haven't been seen in years. Plaintive radio calls are interspersed with loud rock music, broadcasting out to the ether in the hopes that someone comes.

So we're tucked into a little three-hander - the girl, the dad, the neighbour, and the dynamics of being the last on Earth. Given the age of one of the there aren't any of the conventional apocalyptic conversations at play here (despite its European roots there's never a discussion with the child about the need to repopulate one day one day, for example). In other words, the film avoids being creepy with the kid, which is one of its saving graces.

In fact, Quinn McColgan's portrayal of Lu is pretty terrific - she's brash and precocious, playing her with a decent balance between rebellious child and girl with inner strength when required. Having been directed by the likes of Todd Haynes, she brings a level of craft to her performance that's pleasing.

Matthew Fox, aka always-to-be-known-as-the-guy-from-Lost, plays that scruffy looking food horder next door. He brings a certain kind of shouty intensity that works for the role, and we at least believe that he knows what film he's in. That's perhaps too backhanded - he's pretty decent on screen, even if some of the things he's required to do strain credulity.

And then there's Jeffrey Donovan. He's that guy from the show that SNL brilliantly pointed to the incredulity of its existence in the "What is Burn Notice?" sketch. I've never seen his show, like many of you, but I can attest to one thing - in this role Donovan's just bloody awful.

The role of Jack is appallingly realized both in terms of its writing and its execution. There are these deep secrets that are the stuff of soap operas, and no matter the convoluted editing structure that tries to dance around things that you can guess about three minutes into the flick. Note to arty horror directors: messing with syuzhet does not suddenly make your grand reveal clever or interesting, especially when you telegraph the thing massively through every tedious glance or aside and swelling of musical score.

There's more stuff that happens, but by that point it's all just writhing things being shot at through boarded up windows. On a technical basis the film is fairly dark and dreary, and while the makeup effects are pretty good, the CGI integration and artificial snowscapes make it clear that it was shot on studio, and makes it at times feel as a constrained stage play more than an epic end-of-the-world film.

But these are quibbles, and you're going to either enjoy the ride or your not. I was two thirds there (at least in terms of principle cast), and only Donovan's preposterous and distracting take drew me away consistently from just trying to have a good time along the way. There are jump scares and plenty of blood and gore to appease some fans of this shtick, and underneath some of the more egregious missteps there's the kernel of a terrific film.

Instead, we've got something that's at its best moments competent, at its worst risible and downright silly. It very much feels like it's trying too hard to be a grand and serious work while at the same time using some of the most hoary and overripe tropes of the genre to make its points. Maybe these cinematic elements can never die as they keep coming back again and again. Maybe that is the central ironic conceit of Extinction.

Do you feel this content is inappropriate or infringes upon your rights? Click here to report it, or see our DMCA policy.
Jeffrey DonovanMatthew FoxMiguel Ángel VivasQuinn McColgan