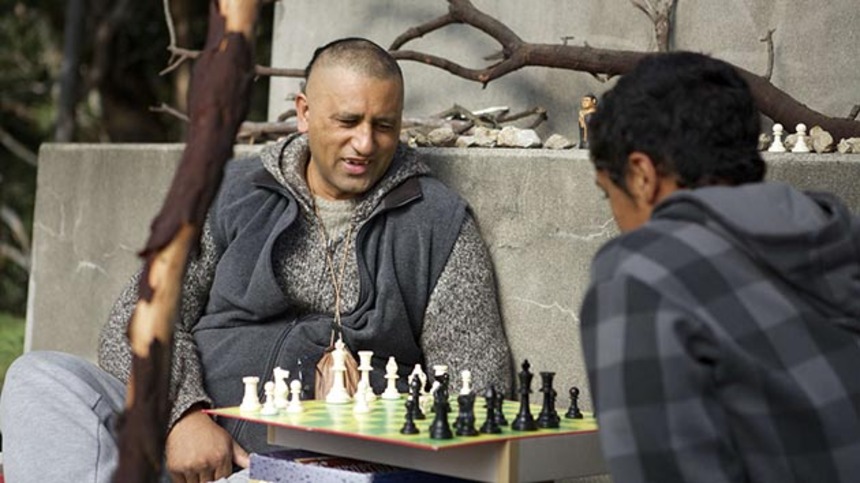 The 3-week long Seattle International Film Fest 2015 has wrapped up and the coveted Golden Space Needle Awards have all been taken home. The big winner of the dramatic prizes was New Zealander James Napier Robertson's The Dark Horse (pictured) which took home Best Feature and Best Actor (Cliff Curtis) audience awards. The Best Documentary award went to Jason Zeldes's Romeo Is Bleeding about a poet amidst a gang war in Richmond, CA.

It was a great festival. Let us know if you made it and what you loved. The full awards release is below.

First runner-up: Inside Out, directed by Pete Docter (USA 2015)

Second runner-up: Me and Earl and the Dying Girl, directed by Alfonso Gomez-Rejon (USA 2015)

Alfonso Gomez-Rejon, Me and Earl and the Dying Girl (USA 2015)

Even the Walls, directed by Sarah Kuck, Saman Maydáni (USA 2015)

This award is given to the female director's film that receives the most votes in public balloting at the Festival. Lena Sharpe was co-founder and managing director of Seattle's Festival of Films by Women Directors and a KCTS-TV associate who died in a plane crash while on assignment. As a tribute to her efforts in bringing the work of women filmmakers to prominence, SIFF created this special award and asked Women in Film Seattle to bestow it.

JURY STATEMENT: For its lively, inventive visual wit and offbeat look at romantic delusion involving a haunted Hungarian nurse, a long-suffering police sergeant, and the ghost of a '50s Japanese pop singer, we have given this year's New Directors Prize to Károly Ujj-Mészáros.

JURY STATEMENT: For the director's brave and unflinching handling of a young ensemble.

Festival programmers select 12 films remarkable for their original concept, striking style, and overall excellence. To be eligible, films must be a director's first or second feature and without U.S. distribution at the time of their selection. The New Directors Jury is comprised of Brandon Harris (Filmmaker Magazine), Amy Nicholson (L.A. Weekly), and Alison Willmore (Buzzfeed).

JURY STATEMENT: Our Grand Jury Prize goes to a film that stopped all of us in our tracks.  One of the joys of the film festival experience is discovering a film that works so well on every level. This is an inspiring film about one man's story that is both intimate and epic - we were knocked out by the filmmaker's achievement in crafting a visually stunning, completely engrossing narrative about one extraordinary human being.

JURY STATEMENT: For its strength in demonstrating the power of art to change lives.

JURY STATEMENT: Which we found to be an exquisitely made film about a FUCKING PERFECT artist.

Unscripted and uncut, the world is a resource of unexpected, informative, and altogether exciting storytelling. Documentary filmmakers have, for years, brought these untold stories to life and introduced us to a vast number of fascinating topics we may have never known existed--let alone known were so fascinating. The Documentary Jury is comprised of Jannat Gargi (Vulcan Productions), Janet Pierson (SXSW), and Anne Rosellini (producer, Stray Dog, Winter's Bone).

JURY STATEMENT: The FIPRESCI jury at the 41st edition of the Seattle International Film Festival bestows its International Critics' Prize to a film that - with an enormous amount of risk-taking - innovatively expands stylistic and narrative boundaries. With a fresh view on intimate relationships, director Pablo Valencia creates an unexpected and utterly original emotional landscape in Chatty Catties.

Festival programmers select 9 films without U.S. distribution that are sure to delight audiences looking to explore the exciting vanguard of New American Cinema and compete for the FIPRESCI Award for Best New American Film. The New American Cinema Jury is comprised of members of the International Federation of Film Critics (FIPRESCI): Pamela Cohn, André Roy, and Dennis West.

JURY STATEMENT: For its diverse and relatable characters, quality mix of emotion and comedy, and accurate and respectful representation of teens, the 2015 FutureWave Youth Jury Prize goes to Seoul Searching.

When Marnie Was There (Japan 2014), directed by Hiromasa Yonebayashi

JURY STATEMENT: For its beautiful and detailed animation, realistic sound design, and original, bittersweet tale of mystery the Films4Families Jury awards When Marnie Was There.

In recognition of superior artistic and technical achievement.

JURY STATEMENT: For its insightful and engaging portrait of podcasting, an audio art form, through a collage of interviews and images.

Each winner will be awarded a $1000 scholarship to the Prodigy Camp.

All short films shown at the Festival are eligible for both the Golden Space Needle Audience Award and Jury Award. Jurors will choose winners in the Narrative, Animation, and Documentary categories. Each jury winner will receive $1,000 and winners in any of the three categories may also qualify to enter their respective films in the Short Film category of the Academy Awards®.

JURY STATEMENT: An expertly crafted narrative that explores life and death through the eyes of a young girl. With a film full of authentic performances, Iman Alibalic is extraordinary as the six-year-old protagonist who receives a live chicken from her father for her birthday, and soon realizes it's meant for dinner. This is an emotional film with a production quality that continues to move the story along and underscore the realities of life in a war zone.

JURY STATEMENT: Hole is a brave exploration of human sexuality and yearning for intimacy through the eyes of a lonely, forgotten, disabled man in the heart of Toronto. Ken Harrower delivers a captivating performance that transcends any labels or limitations and speaks to the need for human connection.

JURY STATEMENT: For its ambitious approaches to visual storytelling and imaginative recounting of an exceptional family history.

The Mill at Calder's End (USA), directed by Kevin McTurk

JURY STATEMENT: There exists a tendency to laud the new--new stories, new techniques, new talent. With the animation award, the jury is pleased to celebrate a film that is decidedly old-school, breathing life into a bygone style, iterating in a story tradition that is centuries old. For this fusion of the modern and classic, we are happy to award Kevin McTurk for The Mill at Calder's End.