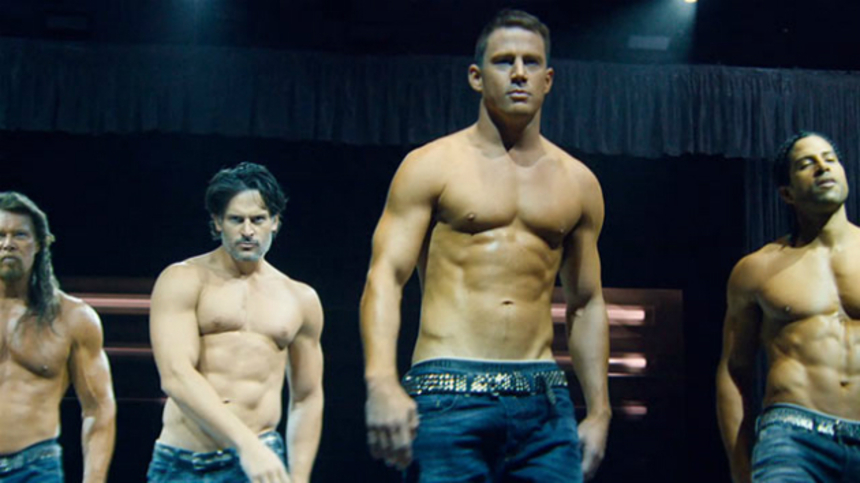 As a delirious musical fantasy, Magic Mike XXL is spectacular. As a movie? Not so much.

Writer/producer Reid Carolin, who also penned 2012's Magic Mike, constructs the sequel as pure fan service, dispensing with any possible distractions, such as characterizations or storytelling. In that sense, it resembles a Hong Kong action movie in the late 80s or early 90s, in which intermittent blasts of action would lead to an extended sequence of derring-do, often tied together with only the loosest of threads.

Instead of Jackie Chan, Magic Mike XXL has Channing Tatum (also one of the film's producers), whose early, first-hand experiences as a stripper informed the first movie. The original installment featured a series of dramatic episodes in which the hedonistic, selfish impulses of some of the strippers created conflicts for everyone, especially Mike Lane (Tatum), and the film concluded with his retirement to the custom furniture business and a possible lasting relationship with a young woman named Brooke.

The sequel picks up with a struggling Mike, who get a call that leads him to reunite with a handful of his former colleagues on a road trip to an annual strippers' convention. Mike, again, is escaping from his personal problems by stripping, but it's only for a long weekend, which leaves scant moments for deep reflection, at least in comparison to the time spent dispensing with clothing in a properly lascivious manner that will satisfy the sensual hunger of the LA-DEES!!!

Indeed, Magic Mike XXL goes to extraordinary lengths to display its love, obedience, and submission to women as the superior sex. There is little talk of equality between the sexes; that's secondary to all the lip-smacking and butt-spanking by the LA-DEES!!! The odd thing about the movie is that, for all its lip service to the idea of being respectful toward all women, no matter their size, shape, or (presumably) sexual orientation, the women in the cast have precious little to do beside smile and scream and sizzle their sexy selves. The mysterious Zoe (Amber Heard) shows up a couple of times in Mike's vicinity, not to tempt him into a new relationship, but to give him the opportunity to invite her to their upcoming show, so as to ease whatever burdens she may be carrying.

Andie MacDowell appears as the leader of a group of middle-aged women who grow increasingly tipsy as the stripping troupe tries to make an incognito visit to the home of a younger woman. Naturally, the women are treated with great respect as the men slowly, slowly tease their libidos into gently growing excitement. Jada Pinkett Smith appears as the owner of a very private strip club for LA-DEES, only she prefers to call them QUEENS; she is the queen of queens and her male workers operate at her beck and call. Elizabeth Banks shows up at the competition as the queen of entrants.

Gregory Jacobs has directed two films before (2004's Criminal and 2007's Wind Chill, neither of which I've seen) but he's better known as Steven Soderbergh's longtime first assistant director. With Soderbergh again along for the ride as director of photography (under his pseudonym Peter Andrews) and editor (under his other pseudonym Mary Ann Bernard), Magic Mike XXL has a similar look and feel to the first film, although it feels less connected and kinetic, and the absence of a strong story thread marks it as inferior to its predecessor.

Magic Mike XXL certainly dances up a storm of steamy yet silly action sequences and effectively showcases the deft physical talents of Channing Tatum, who is more than happy to charm people into forgetting that the movie itself is pure fluff.

The film will have preview screenings on Tuesday evening, June 30, before opening wide in theaters across North America on Wednesday, July 1.