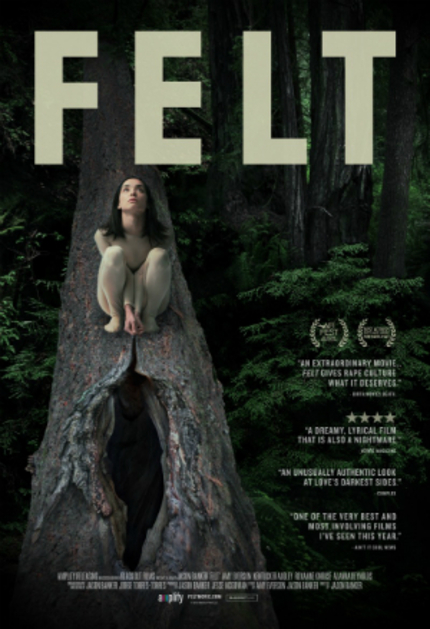 There comes a moment early on in Toad Road director Jason Banker's Felt which beautifully sets the tone for what is to unfold over the next 70 or so minutes of his second narrative feature.
After partying with a few young men in their hotel room, best pals Amy (Amy Everson) and Allana (Allana Reynolds) retreat to the hallway, as Amy's unclear on why she even came. She's sick. She can't sleep. Her dreams and reality are one and the same. As she says it: she is a ghost. She's tried everything. Nothing helps.
The two young women hold each other, laughing over the ways in which they could kill men, for a killing spree is perhaps the only thing Amy hasn't tried to relieve her pain. Allana dreams of strangling a man with her thighs. Amy fantasizes about putting a needle right into the urethra of a penis. Lit by the strange warmth of a bleeding-red hall light, the friends dream together, waking.

The moment is utterly human and humorous; an intimate moment between knowing friends, striking great clues to an inner pain that we in the audience are only just now starting to understand.

Director Banker started off in the world of documentary, notably with the Slamdance selected feature I Am Faith, which powerfully chronicled a camp for children dealing with early trauma that often outwardly manifested in violence towards others. Amy, in some ways, could be viewed as one of these children who never had the family support or the chance to heal within a community. Amy in that sense had to get creative. Literally.
Dealing with the ghosts of her own rape and assault (a trauma we never know about in detail but live with all the same) Amy makes body suites with female and male genitalia, as well as felt penises. She wears the penis-equipped body suit under her clothes: in the woods, at parties, in bed... at a cemetery where she hides behind a stocking mask  she's crudely painted with the face of what is to be assumed is her rapist.

Through the hazy Northern California days Amy wanders, she dances, she hides, a woodland spirit shot by an arrow, now wielding that arrow with no target. Her friends set up dates for her to no avail. It is on one fortuitous night that she meets the quietly humorous, gentle-eyed Kenny (Kentucker Audley) that things change for her. Evocatively dancing in front of him in her chicken suit, Kenny baffled as to who this actually is, we know she falls in love perhaps too quickly. Only in the soft embrace of that new love do old scars and secrets go unrevealed, the couple loosing ground and losing trust quite quickly. Banker's naturalistic, improv-heavy approach to narrative is sure to be a decisive deal breaker for some audience members, as the film can, at times, meander to paralyzing effect. A film once feeling vibrant with vulnerability and verve, Felt can feel numbed, muted, losing ground for our empathy towards Amy, rather than emphasizing her own mood shifts. But these moments are brief, never fully derailing, merely coming with the loose, find-the-moment nature territory of the piece.
As it goes, Banker is too sensitive of a director to really lose us, and Amy is far to striking a persona on her own merits to not warrant our attention. What the creative pair ultimately gives us is a non-judgmental, shame free look into a story ripe with judgments and shame. There are no easy answers in Felt, though it may be easy to dismiss Amy's eccentric, often maddening behavior. With that Banker is asking us to be careful, because by doing so we accept the notion that we live in a culture that largely dismisses rape and violence towards women. And accepting that isn't the key. It is dismissal in all its ugliness.

What is paramount is accepting a woman as a person, not as an object of violence and victim of violence. Feeling for the woman who dances on a log, wrapped in stockings and cloth, waving a plastic penis from her groin... Accepting her helps heal.

By this turn, Banker has found and accepted Amy Everson, in all her so-called eccentricities, to beautiful affect. While some could shrug Felt off as horror a la Miranda July (which to me sounds awesome, by the way), it's again too open of a movie to pigeonholed. What Felt really acts as is a united front of creative forces on a conversation for a subject in our society that needs to get much, much louder. To do this, an artist allows another artist into what is by and large her creative life, and that's very real. To watch that kind of collaboration unfold on screen often results in pure joy, which is siphoned and given to us in that great sadness of knowing and unknowing, the same which Amy dances through with her felt penises.

Banker as a filmmaker is in a unique position to continue this journey between fiction and reality, striking the notion that both are, by and large, one and the same through the eyes of cinema... or well he could do something completely different. Whatever that turns out to be, I await it eagerly.
Review originally published during Fantastic Fest in September 2014. The film opens theatrically in New York (IFC Center) and Los Angeles (Sundance Cinemas West Hollywood) on Friday, June 26 via Amplify Releasing.
Tweet Post Submit

Do you feel this content is inappropriate or infringes upon your rights? Click here to report it, or see our DMCA policy.
Amy EversonJason BankerKentucker AudleyRyan Creighton