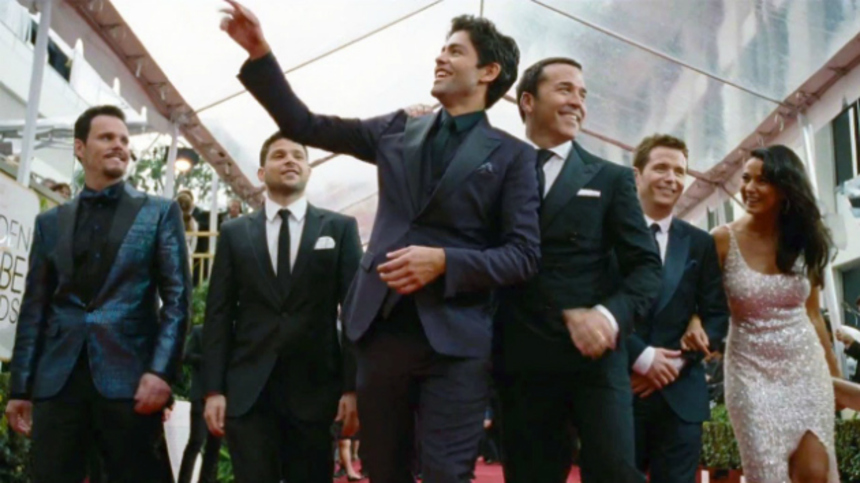 The television series Entourage ran for eight seasons on HBO, but I checked out sometime during the third season in 2006, burned out on the show's consistently tasteless humor and refusal to engage with its subject matter on anything more than a surface level.

The Entourage movie runs for 104 minutes, but my mind wanted to change the channel after the first 15 minutes, when it had become readily apparent that it would be nothing more than the most rudimentary, self-abusing treatment possible of what once sounded like a passably entertaining idea.

Series creator Doug Ellin directed from a screenplay credited to himself and Rob Weiss. The movie begins a few short days after the conclusion of the series, and promptly junks the happy endings that the show conjured up for several of its characters. Movie star Vincent Chase (Adrian Grenier) has seen his impromptu marriage collapse after a few days; best friend and manager Eric (Kevin Connolly) has abandoned his plans to move back to his native New York so that he can help his pregnant ex-girlfriend Sloan (Emmanuelle Chriqui) raise their child; and Vince's agent Ari Gold (Jeremy Piven) has abandoned his planned retirement in Italy and returned to Hollywood so he can run a movie studio.

The other members of the entourage, Vince's half-brother Johnny Drama (Kevin Dillon) and Vince's driver/gofer Turtle (Jerry Ferrara), have remained available for their perpetual duties as sidekicks. Other characters from the series pop up, and a slew of celebrities contribute their names and faces in a joyless parade of insults and rebukes to The Entourage.

Producer Mark Wahlberg helped the series gain initial traction back in 2004, because it was supposedly (loosely) inspired by his own entourage of longtime friends and their adventures in Hollywood. From its earliest episodes, the series traded on the spirit of old Hollywood, building a ghastly collection of cheaters and liars, of young men seeking to "score" with as many women as possible while acting as arrogantly and brashly as possible with each other. In its own, likely unintentional manner, the series passed judgment on attitudes and behavior that were abhorrent and often repellent, yet appeared to thrive in Hollywood. A little of that sort of thing goes a long way; if nothing else, a careful watch of the series might spur any sane, creative person who wants to make movies to steer far away from Hollywood. Perhaps that was the intention, to show that success in the studio system is nearly always accidental and that true individual creativity is a rare gift that is rarely prized.

Or maybe Doug Ellin and his collaborators are just stuck in the male-dominated past, working hard to relive their glory years as young men full of piss and vinegar. Entourage is about three times the length of the old TV episodes, yet feels six times as long with about an eighth of the humor. While the series finale hinted at some kind of growth for the characters, the movie is insistent on recycling what it considers to be its greatest hits, rewinding everyone to where the series began and reveling in all the shallow materialistic bits.

What's perhaps most insulting is that the movie is purposefully absurd, as though Ellin and his team felt that only the most ridiculous of premises would translate to a mainstream audience (i.e., people who never saw the series and know nothing about Hollywood). Thus, Vincent agrees to star in a new movie only if he can direct, and the studio splits its costs exactly 50/50 with a rich Texan (Billy Bob Thornton) who wants his idiot son (Haley Joel Osment) to evaluate the movie when it goes over budget. This allows Entourage to spew multiple insults at Texas and Texans.

Now, I've lived in Texas for years and have absolutely no problem with insults aimed at the state and its residents. But I have little patience for old and bad jokes and insults, which reflects the lazy attitude of the creative talent of the movie. Like the series, the movie is perfectly fine with recycling old and bad jokes about gay people, too, and its attitude toward women is downright dismissive, as though they were placed on Earth solely to service men sexually and professionally and every other damn way.

When it's not insulting the intelligence of potential moviegoers everywhere, Entourage is simply exhausting and discouraging to watch. Phooey!

The film opens wide in theaters across North America on Wednesday, June 3.

Do you feel this content is inappropriate or infringes upon your rights? Click here to report it, or see our DMCA policy.
Adrian GrenierDoug EllinJerry FerraraKevin ConnollyKevin DillonMark Wahlberg