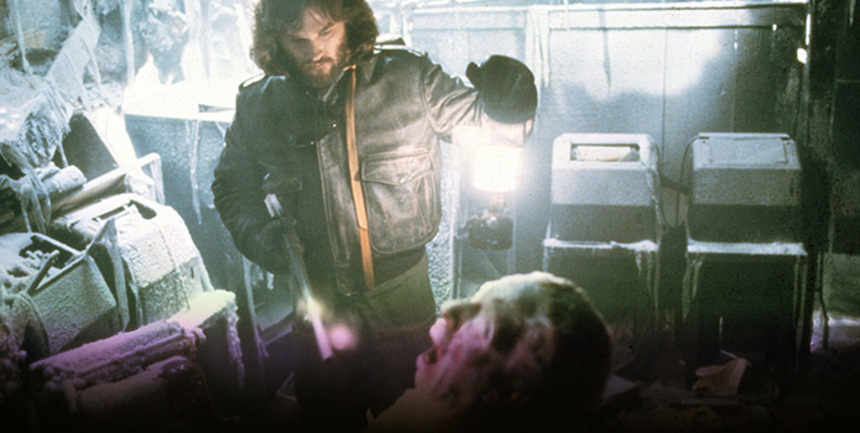 We love us some Kurt Russell here at ScreenAnarchy so we are beyond proud to be presenting the twelve film RussellMania retrospective at the TIFF Bell Lightbox kicking off this coming Saturday, June 13th with John Carpenter's classic The Thing playing on the big screen from 35mm.

The second, and far more faithful, adaptation of John W. Campbell's story "Who Goes There?" (following Howard Hawks' classic 1951 version), John Carpenter's masterwork is one of the greatest (and most gruesome) horror films of all time. After a bizarre run-in with a fleeing husky and a helicopter full of manic, trigger-happy Norwegians, the crew of an American research station in the snowy wastes of Antarctica realizes that they have been invaded by a deadly alien parasite which can ingest and perfectly imitate any biological organism. Led by boozy chopper pilot MacReady (Kurt Russell, in sombrero and windswept hair), the men desperately try to determine which -- or how many -- of them are "the thing" before they are all taken over. Teaming with Carpenter for the third time (after Escape from New York and the TV biopic Elvis), Russell perfected his screen-image makeover as a gruff, tough anti-hero, swilling J.B. and grilling E.T.s with equal relish.

In Toronto and don't want to miss your chance to catch it? No problem! We've got two pairs of tickets to give away and all you need to do to win 'em is email me here and tell me who created the groundbreaking creature effects for the film.

RussellMania continues for the next twelve weeks with a lineup that also includes Tombstone, Overboard, Tango & Cash, Big Trouble In Little China (pre-Dwayne Johnson version) and an awful lot more. Check out the full roster here and buy your tickets now!

Do you feel this content is inappropriate or infringes upon your rights? Click here to report it, or see our DMCA policy.
giveawayjohn carpenterkurt russellrussellmaniathe thing

Kurt Russell has the greatest movie star hair ever. Maybe not but a survey of studio stylists would be entertaining.