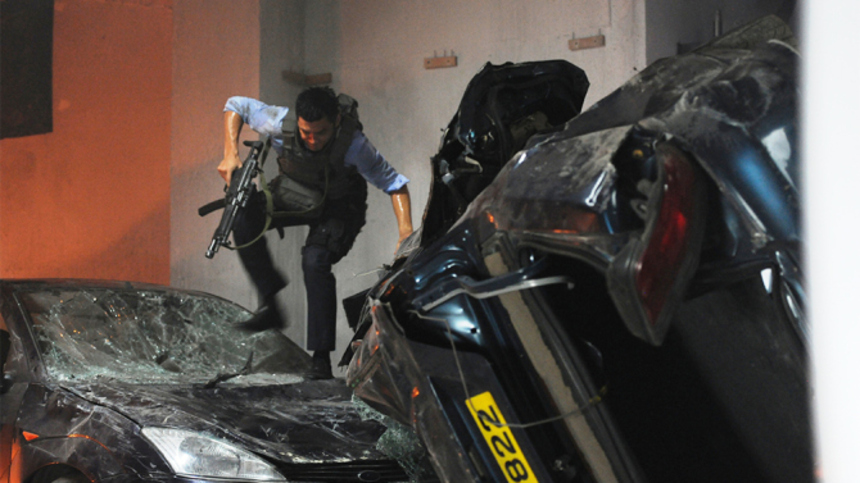 Following Cold War, an interesting and surprisingly bureaucratic action film, Sunny Luk and Longman Leung strive for bigger and louder with Helios, an overambitious and convoluted thriller that had its international premiere at the 17th Udine Far East Film Festival.

The film starts off in South Korea with Helios (Chang Chen) and his sidekick Messenger (Janice Man) stealing one of the DC8s, the smallest nuclear devices ever created. Looking to retrieve their nuke, a team of South Korean special agents consisting of Choi Min-ho (Ji Jin-hee) and Park Woo-cheol (Choi Si-won) go to Hong Kong where the weapon is about to be traded. There, they're joined by Shim Mi-kyung (Yoon Ji-ni) and together join forces with the local police force - task leader Lee Yin-ming (Nick Cheung) and police officer Fan Ka-ming (Shawn Yue).

This myriad of characters soon all meet up for the first and biggest action sequence of the film, when a deal between Helios and foreign buyers is interrupted by the police. This noisy scene proves to be quite impressive thanks to big production values but disappoints by its lack of artistic achievement. What could have been a spectacular sequence in the hands of other directors (in comparison, see what Johnnie To did in Drug War) ends up being just another gritty and chaotic scene of people bleeding and cars exploding.

Sadly, Helios never tries to make up for it as none of the other action scenes display such fire power. The fight between Lee Yin-ming and Messenger nevertheless proves more than satisfying, especially in reversing the gender balance, as the protagonist - a male police leader - needs support from other policemen to take her down. In her killer role, Janice Man delivers a thrilling performance, which leaves us wishing the film had developed more of her background.

Co-writers Luk and Leung somehow expand the thriller-ish and bureaucratic concept of Cold War by diving Helios into international diplomacy issues. One can perfectly see what both directors were aiming for but their political affairs fail to grab the audience's attention and interest. The main problem of the film lies in its storytelling that keeps splitting into continual subplots, which makes the convoluted script even harder to follow.

Even worse, the audience is parachuted into this story with an infinite ensemble cast and has difficulty understanding what is at stake, as most of the ongoing issues are scattered among the huge number of minor characters. While each group of protagonists try to get their hands on the DC8, they coincidentally and meta-discursively aim to achieve the same objective with their on-screen time, seeking to monopolize it. The audience is soon disconnected from the characters, who are progressively reduced to mere pawns within Luk and Leung's scheme.

With a narrative boldness that feels fraudulent rather than displaying any real prowess (the provocative finale is the strongest example of this), Helios suffers from a clumsy script that feels paradoxical when highlighted with Luk and Leung's ambition. Their second film is a disappointing step down from Cold War as they've abandoned their clever approach for a bigger budget, shooting their film in several Asian countries with a top-tier cast. Let's hope that their next film will be less showy and a bit more respectful to its audience.