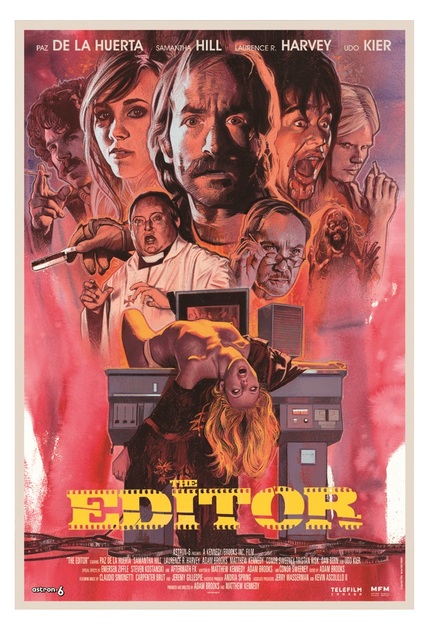 Canada's finest filmmaking collective, Astron 6, have finally found a North American home for their pitch perfect giallo send-up The Editor with Shout! Factory and its horror sub-label Scream Factory. The film, which premiered in TIFF's Midnight Madness section last Fall, has played around the world to unanimous acclaim, including making my own top ten list of 2014 following a screening at Fantastic Fest in Austin.

The Editor's exclusive distribution deal with Shout! Factory marks the first such deal in an English speaking territory and ups the profile of both Astron 6 and Shout! in the process. The deal includes a wide variety of media, including but not limited to theatrical, home video, VOD and streaming services, and broadcast media. With Shout! Factory working on expanding their reach in the digital world via their new streaming channel, Shout! Factory has definitely nabbed a big draw among the niche horror crowd.

The deal was just announced today and no further release details have been made available, but I'll be the first in line when they are. Here are some more details from Shout! and Astron-6's Matt Kennedy and Adam Brooks:

Los Angeles, Calif. (May 1, 2015) - Shout! Factory, a leading multi-platform entertainment company, and Kennedy/Brooks, Inc. have entered a picture deal to distribute THE EDITOR in the U.S.  Directed and produced by Adam Brooks and Matthew Kennedy, this stylish, giallo-inspired horror comedy premiered with critical praise at the 2014 Toronto International Film Festival and is scheduled to play at the San Francisco International Film Festival on May 1. The announcement was made today by Shout! Factory's founders Richard Foos, Bob Emmer and Garson Foos, and filmmakers Adam Brooks and Matthew Kennedy.

"The Editor is catnip to horror film geeks and film geeks in general," said Shout's Associate Vice President of Acquisitions Jordan Fields.  "It's a superbly crafted, maniacal blend of comedy and horror, where the satire is both broad enough to include the casual fan and precise enough to reward the hardcore fan.  There's a reason Astron-6 has such a rabid following, and we'll do our best to make sure The Editor finds the massive audience it deserves."

"We're thrilled to be partnering with Shout Factory for the release of The Editor. Shout has rereleased many of the genre classics that have inspired our work, and they continue to give new and intriguing genre films, like The Babadook and The Battery, a proper release that will appeal to fans. The Editor is our neo-giallo love letter to all things Argento and Fulci, and we feel it will be right at home as part of the Scream Factory catalogue," said filmmakers Matthew Kennedy and Adam Brooks.

A hilarious send-up of classic giallo cinema, THE EDITOR spins the twisted tale of a once-prolific film editor who becomes the prime suspect in a series of murders haunting a seedy 1970s film studio.  Rey Ciso was once the greatest editor the world had ever seen. Since a horrific accident left him with four wooden fingers on his right hand, he's had to resort to cutting pulp films and trash pictures. When the lead actors from the film he's been editing turn up murdered at the studio, Rey is fingered as the number one suspect. The bodies continue to pile up in this absurdist giallo-thriller as Rey struggles to prove his innocence and learns the sinister truth lurking behind the scenes.

The film deal was negotiated by Mette-Marie Katz of XYZ Films and Shout! Factory's Jordan Fields.

More about The Editor