Review: A FOOL, A Stark Reminder That In China Nice Guys Finish Last 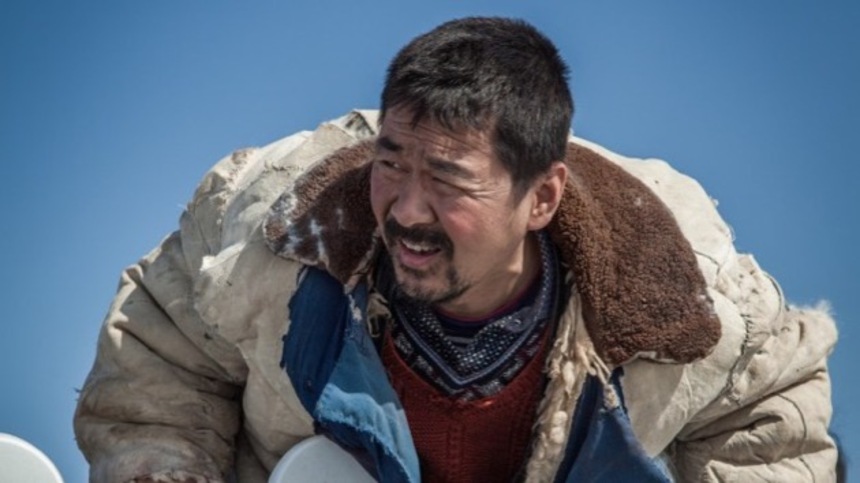 Based on Hu Xuewen's novel Running Moonlight, actor Chen Jianbin's directorial debut is a harsh reminder of humanity's predatory nature, as an honest farmer's efforts to help a young homeless man set of a chain of calamitous events.
Chen Jianbin was awarded both the Best Actor and Best New Director prizes for A Fool at last November's Golden Horse Awards in Taiwan (as well as the Best Supporting Actor prize for Paradise in Service), yet the film, which he also wrote the screenplay for, had its domestic release pulled earlier this year, after supporting performer Wang Xuebing was arrested for drug possession.
A Fool is the latest in a string of gritty noirish dramas emerging from China, portraying the country as an almost Wild West frontier of lawlessness, where the thirst for money often wins out over respect for our fellow man. Ning Hao's No Man's Land, Jia Zhangke's A Touch of Sin, Diao Yinan's Black Coal, Thin Ice and Midi Z's Ice Poison (which takes place on the China-Myanmar border) are among other successful examples of this new sub-genre, and A Fool more than deserves its place among their ranks.
Latiaozi (Chen) and his wife Jin Zhizi (Jiang Qinqin) are struggling goat farmers in a remote area of Northern China. Their grown up son has been imprisoned for reasons not made immediately clear, and Latiaozi's earlier attempts to have his sentence commuted by bribing a local official have stalled. However, his efforts to get his money back, via shady local businessman Brother Datou (Wang), are also failing.
When a young mentally-handicapped man (Jin Shijia) follows Latiaozi home from town one day, they begrudgingly offer him shelter in their barn, and slowly "the fool" begins to ingratiate himself into their household. Shortly after putting up posters around town appealing for family members to get in touch, a relative appears and takes "the fool" home, giving Latiaozi some money out of gratitude. Latiaozi is uneasy about this, but Datou reassures him it is for the best. That is until the next day, when another couple arrives at his door, looking for their "brother".
A Fool throws a harsh spotlight on the widening divide between the haves and have-nots in contemporary China. Illustrated perfectly by the relatively short walk between Latiaozi's simple lodgings and the modernity of the nearby town, China's industrial and economic boom has driven a wedge between business owners, grifters and the millions of simple countryfolk who are being left behind. Latiaozi is a good man, but also incredibly naive and ill-equipped to deal with the opportunists his supposed act of good will attracts.
Latioazi's poor financial situation and strained family situation are already more than this simple man is equipped to cope with. Having another mouth to feed, only for "the fool" to then be snatched away and replaced by a number of more educated, wily and devious influences, all pointing the finger at him and demanding cash, proves physically and emotionally challenging. An odyssey that Latioazi may well not make it through unscathed.
Shooting mostly in long, single takes, and relying heavily on performances and pregnant pauses to build drama and tension, Chen Jianbin is not averse to the occasional artistic flourish, which no doubt ingratiated him with the Golden Horse jury. The use of mirrors and music during Latiaozi's frequent meetings in Datou's car are just one such example, while Xie Tianxiang's cinematography beautifully captures the vast expanses of unforgiving landscape that separates our protagonists from the modern world.
The performances are universally excellent, but A Fool is every bit Chen Jianbin's show. Latiaozi is a classic innocent, but also a frustrating, gullible simpleton who steadily usurps the role of the eponymous fool from Jin Shijia's unwanted houseguest. Despite his every effort to do the right thing, money trickles through his fingers like water, while everyone around him is poised, cup in hand, to collect every last drop. There is tragedy, but also a begrudging acceptance of his fate, because we understand what Latiaozi doesn't, that the world is full both of vultures, and hapless prey on which they will gladly feed.
Of course, this is the image of modern China that filmmakers such as Chen, Jia Ziangke and Diao Yinan are desperate to expose, and which the Chinese authorities are all-too-eager to paper over with glossy big budget confections that revel in the luxurious lifestyles seen in cities like Shanghai. While there is no denying the Chinese government has been coming down hard on celebrities embroiled in drug or sex scandals, perhaps Wang Xuebing's recent misdemeanour was merely an excuse to prevent the release of another film painting an ugly, brutally honest portrayal of a country struggling to control itself.
Either way, A Fool is an arresting drama that perfectly encapsulates China's current confused identity, while singling out Chen Jianbin as a bold new voice in the country's vast cinematic landscape.
Sign-In to Vote
Tweet 0 Submit

More about A Fool

I didn't get that impression from watching this while my mother was pained in typical Chinese fashion that no good deed goes unpunished and nice guy's finish last because what this film shows is that there is not enough affection in the environment - even when people help out of kindness and exasperation - the help they exercise is not the ultimate thoughtful problem solver that might be exercised in America - it's kindly but it's not really useful - it's not a brave leap of aid.

I take issue with the lady cop whose harshness could have been replaced with a hey, let's take down a police report AND you tell them to come talk to me if they appear at your door again because now I'm in charge of this MISSING PERSONS case NOT the good samaritan whom you are NOT allowed to question or approach.

They may never come back but at least the couple have some kind of support to assuage their immense stress.

It's basically what Preet Bharara just said in Kentucky about cold indifference by third parties - in china, everyone is so stressed and shortchanged already, they can't bear to go all the way and take on more troubles and they can't be forceful and really do a pivot but in America (maybe not NYC) people do help more usefully.

It's the merit of the good deed not just the existence of an official good deed - it has to be quality assistance.

And what you do is - if you come from an unaffectionate background is you fake it to make it - you may not have the inner emotional reserves - but what do better people do - and you mimic that - you behave like that so no one feels shunned or alone without help.

I don't know if Preet Bharara is real or just Sponsored Content designed to look like a renegade - he doesn't look at the bias in taxation and legislation in NYC so ....

IF this couple emigrated to North America and stayed away from predators and met a more optimistic culture and philosophy, their simplicity and goodness would not be mistreated.

And they weren't totally obtuse anyway - I think they were channeling their pain over their own son into kindness towards the homeless guy and they even considered switching him out for their own son.

He needed a translator to traverse a newly opportunistic conniving world - that's what he was looking for from the taxi driver.