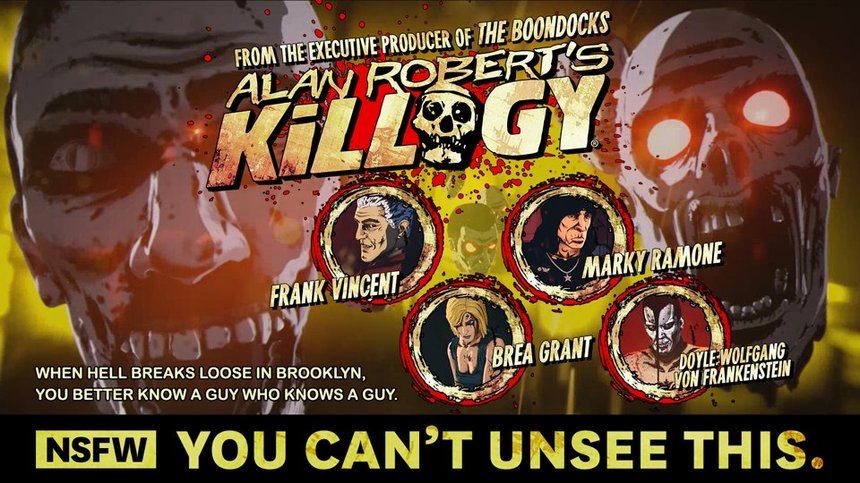 Comic creator Alan Robert had quite the little hit on his hands with his IDW published mini series Killogy and it looks as though there's a move afoot to bring the story off the printed page and on to screens as an animated series.

Killogy is a high-energy, animated dark comedy from creator Alan Robert (Life Of Agony) based on his hit IDW Publishing comic series, in association with Squeeze Studio Animation and award-winning producer Rodney Barnes (The Boondocks, Everybody Hates Chris). Stars Frank Vincent (Goodfellas, The Sopranos), Marky Ramone (the Ramones), Brea Grant (Heroes, Dexter), and Doyle Wolfgang Von Frankenstein (the Misfits) battle it out in apocalyptic-Brooklyn when an ancient voodoo curse wakes the dead and floods the city with blood. This outrageous premise and bizarre mash-up of punk rock royalty, wiseguy sarcasm, and over-the-top gore makes for one hilarious rollercoaster ride.

Robert's own Wasted Talent Entertainment label - which also includes VHS Viral producer Chris White and Descent producer Jeff Mazzola - has teamed up with the exec producer of The Boondocks to create an animated proof of concept and should response be strong enough the plans are very much to move to full series. Check it out below!