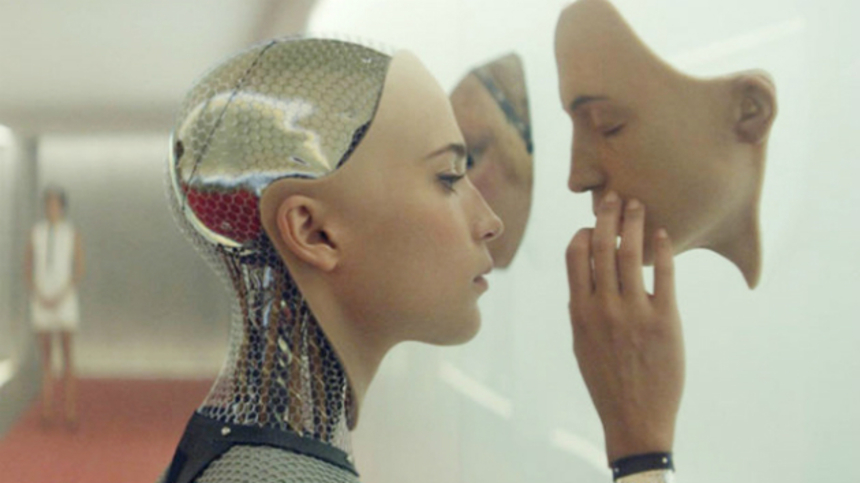 Alex Garland has become known for some pretty great sci-fi screenplays, such as 28 Days Later, Sunshine and Dredd. So it seems only natural that he would eventually direct one of his own works.

Ex_Machina has some great elements, such as a beautiful location, top-notch production design, and (at least at first) an interesting concept; but, sadly, what begins as an examination of artificial intelligence becomes a cliché of sexual desire and jealousy. I wanted to like this film, and kept hoping that Garland would find his way back after it started to come apart at the mid-way point. And it isn't necessarily the directing that is the problem, but perhaps it was a mistake for Garland to take on both writing and directing. It is the story that suffers.

Caleb (Domhnall Gleeson), a talented programmer at the world's biggest internet search company, wins a contest to meet the reclusive company owner and inventor Nathan (Oscar Isaac). Taken to a remote and highly secure spot, Nathan reveals that he has brought Caleb there to help him test his robot, Ava (Alicia Vikander), to see if she passes for human. Of course, Ava isn't just an robot, but possibly the first AI that can pass for human. As Caleb spends his days talking to Ava, his attachment to her grows, as does his suspicion of what Nathan really does in his hideaway.

One point I have always liked about Garland's writing is his ear for great dialogue, and certainly in this regard Ex_Machina is no exception. The story and its world are set up very quickly, and within five minutes, Caleb and Nathan are meeting. Garland cuts to the chase, wasting no time with Nathan telling Caleb why he is here, and what he wants Caleb to do. Nor does Garland insult the viewer's intelligence, at least in terms of how technology and science are discussed, neither dumbed-down nor in heavy tech-speak.

At least in the beginning, Garland creates a fascinating scenario, of the reclusive genius and his admirer, the desire to create AI and what it might ultimately appear as, and how it would be tested. But rather than explore what AI means for the future of humanity, and how humans would interact with it (or possibly reject it), the film becomes another in the recent line of films about the hopeless nerd who falls prey to an apparently manipulative woman.

At first, I was willing to go along with Garland's scenario. After all, if you were a robotics genius, wouldn't you create a robot that you found physically attractive, who would be programmed to desire you and want to look as 'beautiful' and human-like as possible? Maybe, but to focus the plot on a robot who is trying to seduce you gets dull and more than a little sexist quite fast. 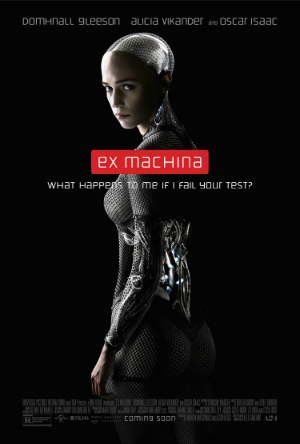 From the film's perspective, Nathan, a genius, seems to have no interest in robotics beyond making an incredibly sophisticated sex toy. Ava, a robot designed as a woman, has the only option of using her programmed sexuality to escape from her prison. Sadly, too often in film, a female robot (as, well, so many female characters) is assigned sexuality and used as an object of sexual desire as opposed to male (or male-voiced) robots, which are used as representatives of the future of artificial intelligence that will surpass humans.

Isaac has more than proven himself as an actor, and his performance here is probably the best part of the film. He is genuinely charming with more than a hint of terrifying genius that has gone wrong, having slipped just enough into an odd kind of insanity that he can see himself as something of a god.

Gleeson is fine, but isn't really given much to do beyond react. He stands in well as an intelligent yet sensitive nerd who can possibly outwit his foe. Vikander performs as admirably as she can, and is definitely believable: if it's through special effects or her own physicality, her movements as the robot trying to emulate natural human movement are spot-on. But she is given little to do besides be a cross between a prisoner and a femme fatale.

There are some good, creepy moments in the film, in particular some very odd dancing by Isaac that shows an off-kilter side to the film's tone I wished had been more explored, and, close to the climax, a Bluebeard's Castle moment that I thought might lend the film a more original perspective.

Like recent films Under the Skin and Her, when the female character is the 'other' (robot, computer software or alien), her existence is automatically relegated to her sexuality and desirability; her character resides solely in how the male perceives her. I'm in danger of getting too academic for a film review, but given Garland's previous work, Ex_Machina deserved to be so much better.

Review originally published in January 2015, in connection with the film's theatrical release in the UK. Ex_Machina opens wide in theaters across the U.S. on Friday, April 10.

Do you feel this content is inappropriate or infringes upon your rights? Click here to report it, or see our DMCA policy.
Alex GarlandAlicia VikanderDomhnall GleesonEx MachinaOscar Isaac