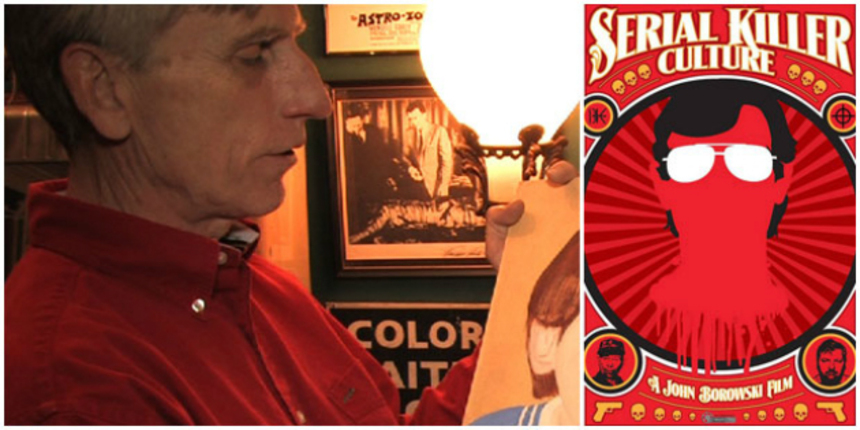 What drives ordinary-looking men and women to become obsessed with serial killers? Is it a dark corner of their psyche that makes them feel that they have something in common with horrible people who have caused untold pain and suffering to dozens upon dozens of victims and their families?

As revealed in John Borowski's surprisingly compelling documentary Serial Killer Culture, the answers are more varied than might be expected. Borowski spends a varied amount of time with each interview subject in turn; nearly all are defensive about their obsession, which is understandable. Yet all are able to recall what started them on the path toward learning more about serial killers, sometimes an innocuous incident in their youth that pushed them in that direction.

"I agree with everyone who says it's a morbid fascination," says one collector. "But..." And he goes on to explain why in an entirely reasonable, understandable, even logical manner. While some of the interview subjects are more outwardly personable, such as a gentleman who suffered tragic loss in his own life and later created a series of comic books about serial killers, others are outwardly reserved, until they start talking about their "morbid fascination."

The subjects break down into easily identifiable groups, chiefly collectors (art and assorted objects made by and about serial killers) and creative types (writers and musicians). Then there's a woman in Milwaukee, Wisconsin, U.S.A. who became fascinated with serial killer Jeffrey Dahmer and started offering guided tours of notorious locations associated with his crimes. She notes that young women make up the majority of the guests; when asked, most say that, as residents of Milwaukee, they're interested in all aspects of the city, and that includes the more seamy side of things. Something about Dahmer intrigues them too, and they want to learn more.

Indeed, the thirst for knowledge appears to have been a driving force for many of the dozen or so interview subjects. They read about one serial killer in particular, and something about the killer's crimes piqued their curiosity, and they wanted to learn more. One thing led to another, and before they knew it, they had room(s) filled with pictures and photos and personal possessions of murderers, or they had spent their entire musical career singing about serial killers, as a band in Sweden has done, or the individual becomes the art dealer for an overwhelming multiplicity of killers.

None of the interview subjects seeks to diminish the horrible crimes that were committed, or expresses admiration in any way for the serial killers. Often they vehemently express their hated for these men. Yet their curiosity / obsession continues, sometimes as a ruling force in their lives, as in the case of the filmmaker himself, who has made several documentaries already about serial killers, and makes no apologies for doing so.

Borowski dresses up the transitions between talking heads, but mostly he shapes a series of interviews into an utterly fascinating film that held my attention throughout, which is really saying something, since I watched it from a bar stool in a drinking room converted into a temporary screening facility that was totally packed. Serial Killer Culture deserves further attention.

The film enjoyed its European theatrical premiere at the Night Visions festival. It is available in the U.S. on DVD and various VOD platforms.