SXSW 2015 Review: WE ARE STILL HERE, A Refreshing Yet Disturbing Thriller 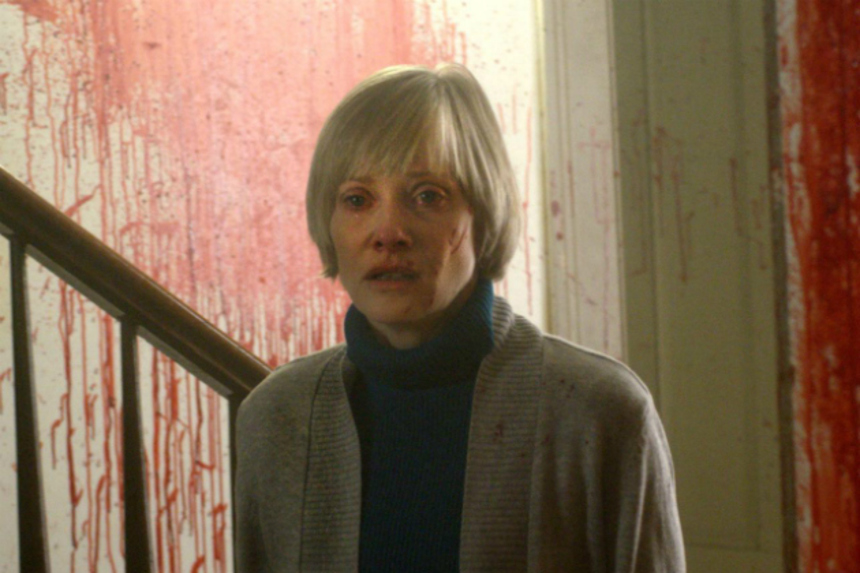 The quiet before the storm is unsettling.

It's a beautiful winter day in 1979. Anne (Barbara Crampton) and Paul (Andrew Sensenig) are driving to their new life in a new home in New England. Paul drives, calmly, while Anne emotes, quietly. They are leaving behind their longtime home in the city in search of a fresh start in the country, hoping that the change in setting will help them deal with their grief over the loss of their teenage son Andrew in an automobile accident.

Anne is not convinced. She is willing to give it a try, even though she still trembles at the very thought of her son. As often happens in relationships, Paul has assumed the role of caretaker, clearly at wit's end at how to help his beloved and broken wife.

Their new home is a lovely older house, surrounded by isolation and snow and freezing cold. They move in quietly and go about the business of setting up their new home quietly and embrace each other quietly as they watch television.

Immediately thereafter, something happens to signal that all is not right in the old house, and that a troublesome storm is brewing, a storm not of snow and sleet and hail, but of death and decay and, perhaps, a more literal hell.

Writer/producer Ted Geoghegan makes an assured directorial debut with the stylish and mesmerizing We Are Still Here. After establishing a serene yet creepy landscape through a minimal amount of dialogue and a plentitude of shots revealing the utter isolation in which Anne and Paul are living, the picture slowly begins to change.

One chilly night, Dave McCabe (Monte Markham) and his silent wife show up on the doorstep, and they've barely been invited in and sat down before Dave starts unreeling what we might call "The Exposition File." He explains that the house has been vacant for 30 years and then explains why. As expected, that bumps up Anne's anxiety levels, but it's not long before her stress-related ailments are put to the side, and the movie amps up nicely into a twisted and extremely bloody thriller.

The territory may be familiar -- how could it not be, with a haunted house and very explicit warning flares shot off into the sky? -- but Geoghegan and company pull off good surprises that keep the energy level humming. Chief among Geoghegan's conspirators is Karim Hussain, an immensely talented cinematographer who captures the beauty and terror of the story's many daytime settings, putting the lie to the idea that horror only comes out at night.

In front of the camera, it's an absolute pleasure to see Barbara Crampton, Andrew Sensenig, Monte Markham, and Larry Fessenden deliver note-perfect performances in substantial roles. It's also a bonus to watch Lisa Marie take advantage of her increased screen time. (The latter two actors show up a bit later and play important parts in the drama.)

We Are Still Here does not reinvent the horror wheel, but it respects the genre enough to know when it's time to grease that wheel with a little blood -- OK, a lot -- and more than a few welcome surprises. It manages to do all that with an authentic spirit, whether it's being quiet and unsettling or jolting and savage.

It made me wish for springtime.

Do you feel this content is inappropriate or infringes upon your rights? Click here to report it, or see our DMCA policy.
Andrew SensenigBarbara CramptonLarry FessendenLisa MarieMonte MarkhamSXSW 2015Ted Geoghegan