SXSW 2015 Review: All In For The MANSON FAMILY VACATION 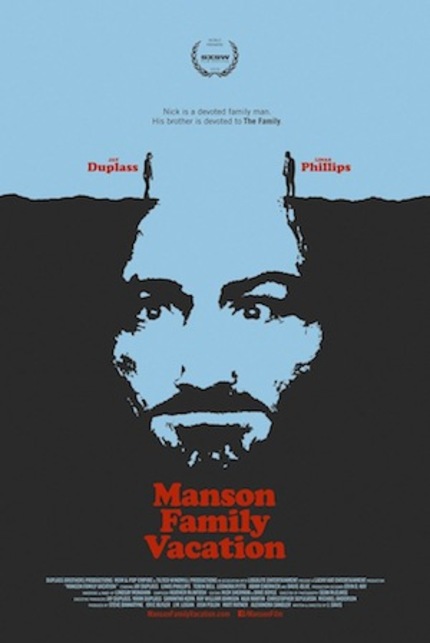 When the Manson story broke, the hardest question on the minds of parents everywhere was 'how is it possible that seemingly good kids could be taken under such a nefarious wing and convinced to commit two of the century's most heinous crimes'. What could possibly have been missing in their suburban family lives to account for swapping them for a far darker sense of family?
The word family is an integral point of discussion in J. Davis' film, Manson Family Vacation. Like so many others captivated by the horrific events as spelled out in prosecuting attorney, Vincent Bugliosi's, true crime tell-all, Helter Skelter, Davis has clearly spent a substantial amount of his life attempting to wrap his head around the motivation of late-60s runaways giving up their homes to live in psychedelic awe of a psychotic guru.
Davis' meditative point of entry revolves around two brothers, Nick and Conrad, played by Jay Duplass and Linas Phillips in one of the best onscreen buddy relationships in some time. Nick is a square lawyer, who, along with his wife and five year old son, has successfully carved himself a slice of the good ol' American dream. Nick, like his father before him, is one type of 'pig' Manson had in mind when he'd preach to impressionable youths of the virtues of escaping mundane conformist society for a purer, earthier lifestyle.
Nick's life is rocked when he receives a visit from his rambling adopted brother, Conrad. A black sheep since childhood, Conrad never did fit in with the strangers who took him in and provided him with a roof, demanding to be called Mom and Dad. Since his parents' motivation for adopting had everything to do with his mother's inability to conceive, when his younger brother was miraculously born years later, Conrad was that much more marginalized as he grew up second fiddle to the family's ideal son. You might call him an adopted accident; a natural born outsider.
Now, a lifetime later, though the two brothers haven't kept in loving touch, Conrad drops in on his Los Angeles dwelling bother en route to a new job in Death Valley. Things expectantly begin on the wrong foot, considering Nick's resentments for Conrad's lack of presence during their father's dying days. It doesn't help that Conrad, a tourist to the city, is keen to take his brother along on a sightseeing tour. The concept perhaps wouldn't be so bad if the attractions Conrad has in mind didn't consist of spots like the Tate and LaBianca murder houses. Nick reluctantly accepts his Manson-enthusiast brother's proposed day of bonding, but comes to regret the decision immediately. Turns out the present day residents of the murder sights don't take too kindly to the glorification of evil.
The Manson tour, which makes up the films first act, ends bitterly, and despite more brotherly resentment than ever, Nick is pressured by his wife to drive Conrad to his new job in Death Valley. But what Nick doesn't know, though every 'die hard' Manson aficionado in the audience will, is that Death Valley became the Manson family hiding spot after the murders and a raid of their previous utopian dwelling, Spahn Ranch.
From here on, the plot thickens in wonderfully unexpected ways, wherein the brothers already shaky relationship is put through one hell of a ringer. Though the Duplass brothers only produced the film, the team has grown incredibly skilled at championing films where uniquely quirky premises end up offering genuinely rich relationship studies, as surprisingly touching as they are shocking. Without revealing further plot, suffice it to say J. Davis' untraditional tale of two brothers reconciling their differences, exists firmly within the Duplass' singular wheelhouse.
With incredibly charismatic performances, stylishly nostalgic cinematography often utilizing 60s/70s long lens zooming to evoke a subtly frightening sense of surveillance, Davis' allegory hits so many insightful points about both the hardships of biological family and runaway psychology, MFV ends up wrapping up into a jaw-dropping marvel.

For while the trials of Manson are somewhat of an over-milked phenomenon, what separates Davis from the rest of the cult obsessives, is a deep understanding of the circumstances leading up to summer 1969, as well as a humanistic perspective on carving out independence within a family framework. MFV is funny, empathetic, and eventually brilliant in a way that makes the film one of the year's standout achievements. Who knew a film about Manson worship could be so tender?
Tweet Post Submit

Do you feel this content is inappropriate or infringes upon your rights? Click here to report it, or see our DMCA policy.
Charles MansonHelter SkelterJ DavisJay DuplassLinas PhillipsManson Family VacationSXSW 2015