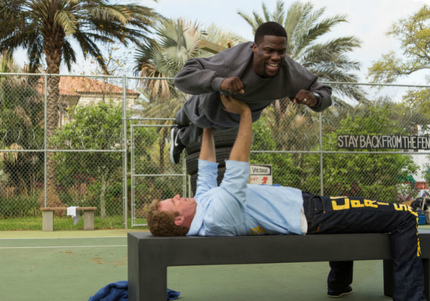 Less a movie than a set-up for a haggard series of intended comedy blackouts, the new film Get Hard relies far too heavily on the well-established screen personas of Will Ferrell and Kevin Hart to be successful on its own meager merits.

Ferrell, working without the net of an established property for the first time since 2012's The Internship, retreats into the safe haven of a dim, dense, lovable mug, a wealthy financial expert named James King who is pleasantly oblivious to everyone other than himself. When he is framed for a financial crime, James rejects a plea deal endorsed by Martin (Craig T. Nelson), his boss and soon to be father-in-law, and is quickly convicted and sentenced to 10 years at San Quentin, a maximum security prison in California. Given 30 days to 'get his affairs in order,' his fiancee Alissa (Alison Brie) quickly abandons him, and James sinks into a pitiable state.

But then the extremely Caucasian James has yet another racially-insensitive encounter with Darnell (Kevin Hart), the African-American owner of a car-washing service in the basement of the building where James has worked. (Here comes the joke.) James makes the assumption that Darnell has been in prison, an impression that Darnell declines to correct when James seeks help to prepare for his imprisonment -- and offers to pay Darnell a large sum of cash for his trouble.

As it happens, Darnell needs $30,000 to make the down payment on a house in a better neighborhood, and so he eagerly accepts. (He'll do anything for his wife and young daughter.) Darnell adopts a "tougher" attitude that would not convince anyone except the gullible James, and slowly converts James' mansion into a child's view of a maximum security prison, complete with handwritten signs and the conversion of James' extremely large household staff into willing accomplices. 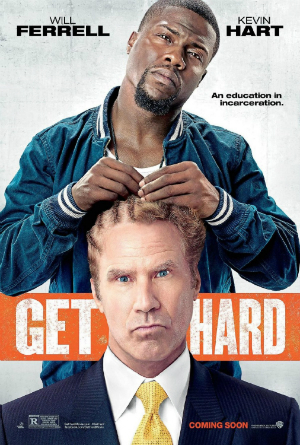 Why the household staff is still employed by a convicted felon is but a minor, unimportant detail in the scheme of things. Get Hard is, obviously, not meant to be taken seriously by any stretch of the imagination. The screenplay is credited to Jay Martel, Ian Roberts, and Etan Cohen; Martel and Roberts are recent veterans of Key and Peele, a very funny TV sketch show, and Roberts is a founding member of the Upright Citizens Brigade, while Cohen, who directed, has multiple feature credits as a writer, including Idiocracy and Tropic Thunder.

Ferrell and Hart are accustomed to comic improvisation, and many scenes in the movie play out as though they were largely improvised. But what may have worked in front of a live audience doesn't always translate on screen. Extended stretches of Get Hard are rough and uneven, often playing long in search of a joke or, at minimum, a witty moment.

The desperation for a laugh perhaps explains the many racially-tinged jokes, which often take on the disapproved air of the politically correct set. In other words, it's as if the movie stated in subtitles: 'Yes, we know this is racially insensitive at best, but we're all adults, and one of us is black, and the other one is white, and we're making fun of real racists, so it's all OK, trust us. Besides, all we want to do is make you, the paying audience, laugh and forget your troubles for a little while.'

In the same spirit, Ferrell and Hart -- I'm not sure why I bother using their character names -- visit a cafe known for its gay clientele, so Ferrell, who has demonstrated no ability to defend himself physically, can learn how to orally pleasure a man. Naturally, Ferrell recoils in disgust at the thought -- less at the idea that he might be violently assaulted than the concept that he might have to open his mouth and suck a penis -- and the gay customers are very light on their feet, if you know what I mean, and...well, that summarizes the level of comedy that the actors and filmmakers are seeking.

Get Hard is a movie that delights in its own perceived cleverness and imagined message of tolerance. If you giggle at the sexual innuendo implicit in its title, Get Hard may be just what you're looking for.

The movie opens wide in theaters across the U.S. and Canada on Friday, March 27.

More about Get Hard