SXSW 2015 Interview: Will Ferrell and Kevin Hart Teach Us How To GET HARD 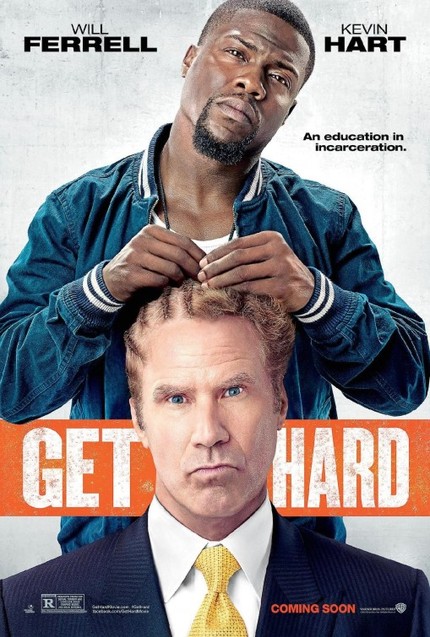 Getting hard is not an easy process. There are many painstaking steps one must go through to achieve this deity-like way of life. Luckily for me and whoever reads this article, Will Ferrell and Kevin Hart tell us the way.
The duo were in Austin this week to promote their new film Get Hard, which had its world premiere at the SXSW Film Festival. I sat down with the boys to chat about the movie, as well as topics too taboo when you've established yourself as a prolific comedian.
There is an audio version of this interview but sadly we are not allowed to use it. It's a shame because I threw some jokes their way and they went with them when most comedians would probably tell me to go put my nose in the corner for the rest of my life and never try to be funny ever again. They hilariously bounced off what I had in store and their banter with each other is priceless. These two have great camaraderie.
If you can't read, give me a call and I'll come over, tuck you in, and read this to you as a bedtime story.

It's the most important question you're going to get asked on this tour, and probably the rest of your life.

And I hope you can answer truthfully. How does one get hard?

Kevin Hart: How do you get hard, Will?

Will Ferrell: Um, wow. That could be answered in a number of different ways.

Kevin Hart: I know how I get hard. Running on a treadmill behind women in a gym normally does it for me.

Kevin Hart: Yeah. Yep. It's almost ... It doesn't make me a pervert because they don't know about it, but, uh, let's say at 8:30 the same time every morning.

Will Ferrell: You know how popular cat stuff is on the Internet?

Chase Whale: That'll do it?

Will Ferrell: That'll do it.

Chase Whale: That's how you get hard?

Will Ferrell: That's how you do it.

Chase Whale: Hah, we are on the same wavelength.

Will Ferrell: 45 seconds of anything with a cat.

Will Ferrell: It's done.

Kevin Hart: Okay. Ready to go. I love it.

Chase Whale: So I did some heavy, extensive research on the Internet, and I found out that you're both comedians.

Will Ferrell: Was that hard to dig up? (laughing continues)

Thanks for going along with my terrible jokes.

Will Ferrell: No, I love that.

Chase Whale: So you, you know, you're both prolific and well regarded comedians, well established. That said, does that change the way you think about comedy? When you're doing projects, or you're ... Is it still fair game as far as like, sensitive subjects go?

Kevin Hart: I have some subjects that I don't touch.

Kevin Hart: I think you have to, you have to be smart of, of what you'll address and what you won't address, and you know, at the end of the day, even in the realm of doing a film, or any project that you're doing, you know, when you say things, people still look at it as you said it. So you can say things, but I think you should always just be smart about how, how you approach those sensitive topics. Like, I know what my sensitive topics are, uh, that I don't like to touch regardless, and one of them is uh, white people. I just, I don't ...

Chase Whale: 'Cause they're terrible, right?

Kevin Hart: I just don't, something about them.

Will Ferrell: Well, 'cause they're lame.

Will Ferrell: They're lame.

Kevin Hart: There's something about the whole ...

Kevin Hart: ... that whole white people thing throws me off.

Kevin Hart: So I stay away from that.

Kevin Hart: I remember there was one line in the movie where Will says something to me, I'm supposed to say, "Shut up, white boy," and I was like, "Hey."

Will Ferrell: No, thanks.

Kevin Hart: Not. Not coming out of my mouth.

Kevin Hart: No. It was a big thing on set. I said, "Call the studio down. We got to change this line." It was a three-hour delay 'cause we didn't know what else to call Will.

Kevin Hart: And they were, "What do you wanna call him? I was like, "Something besides white boy. 'Cause, that's not me." You get what I'm saying?

Chase Whale: I get it.

Kevin Hart: Yeah, it is.

Will Ferrell: I mean you're naturally drawn to pushing the envelope, and poking and prodding, but ... and there are just some subjects where you're just like, "Oh no, that's just not funny."

Kevin Hart: Some of them. Some subjects is like that.

Will Ferrell: I, I wish I could give you an example.

Chase Whale: I understand it. So, big theme in Get Hard is stereotyping. Going off that, do you think there's a line that should be drawn in comedy?

Kevin Hart: That's a good question. Will? Do you think there's a line? I think so.

Will Ferrell: I think there should be a Council of Comedians that every year ...

Will Ferrell: ... go to a unspecified location and discuss what can or cannot be touched in the world of comedy for the proceeding year.

Kevin Hart: This is gonna be tough because we already have one of those ...

Will Ferrell: Oh. So that already exists?

Will Ferrell: A secret society?

Kevin Hart: It's been going on for about seven years, Will.

Kevin Hart: We, uh, we meet on Wednesdays.

Will Ferrell: I know, it's an illuminati group. (laughing)

Kevin Hart: What if you found out I was at like, a black rally comedian group that met.

Will Ferrell: To control and manipulate the sub-, the subject?

Kevin Hart: That like, yeah, to control what's said. Me, Paul Mooney, and Shucky Ducky. (laughs)

Kevin Hart: Yeah. We met to discuss what's going on in comedy and what we should stop saying.

Will Ferrell: You know, like the Bill Cosby thing. Right? Very controversial.

Chase Whale: He lost his trail.

Kevin Hart: That's the guy who does ... he's not aware of anything. Wait. Cosby's dead?

Will Ferrell: He blew off jury duty for 20 straight years. (laughing) And now it's bitten him on the ass. And it's horrible. I mean, if you have one civil duty ...

Will Ferrell: Think about that.

Kevin Hart: Yeah. Have you ever done jury duty?

Will Ferrell: I did it a couple of weeks ago.

Will Ferrell: I didn't get, my number didn't get picked.

Kevin Hart: I went there, and I tried to pull the famous card.

Kevin Hart: This'll be real good for you. This is a true story. So, the, I go there, and uh, my lawyer's like, "Yeah Kev, look. Just go there," they gave me this whole thing to say.

Kevin Hart: Yeah. All you gotta do when they say something, say this, they'll know, and, and then they'll just let you out, right? This is a true story.

Kevin Hart: Three, the three people before me ... I'm like sitting in the booth, the bailiff sees me, he knows who I am. Even the judge ...

Will Ferrell: Oh, so you've been brought into the courtroom.

Kevin Hart: I'm in the courtroom.

Kevin Hart: This is real. The judge like, nodded at me, saw me.

Will Ferrell: Mm-hmm (affirmative). He gave you a thumbs up.

Kevin Hart: So, it comes, it comes down, and exactly what my lawyer told me to say, uh, it was something like, "I cannot, uh, I cannot be impartial," it was like a weird legal saying but I had it written down, the guy in front of me says it, and the judge goes, "Well you know what, I'm gonna take that as you wanna be here, so, thank you sir." And he's like ... he sits down and comes to me, and he asks me and I was like, "I'm not, I just ... I can do whatever you need me to do." "Thank you Mr. Hart," and afterwards they let out and the judge called me up. She was like, "Tell the truth. Can you be here or can you not be here," and I was like, well technically I, I can.

Will Ferrell: You can.

Kevin Hart: She was like, "Do you have travel proof?" I don't. I don't have it. She was like, "I need a recess and I'll let you know if you can go." They made me stay for the whole day.

Kevin Hart: And after that, she said go.

Kevin Hart: 'Cause you can't be here. But I had to stay. I almost was a part of the jury. And it was a murder case.

Will Ferrell: I, uh, I walked in, I showed up for my jury duty with a tee shirt that said, "Guilty." (laughing) And just kept doing this, and they just, they said please go home and change your shirt. Change your shirt and come back tomorrow 'cause that's not going to work.

Kevin Hart: That's not going to work at all.

Kevin Hart: It's too many weird people in there too. I'm sorry to take your interview off of this but it's such a great topic.

Kevin Hart: That was such a good topic.

Kevin Hart: That was such a great topic.

More about Get Hard