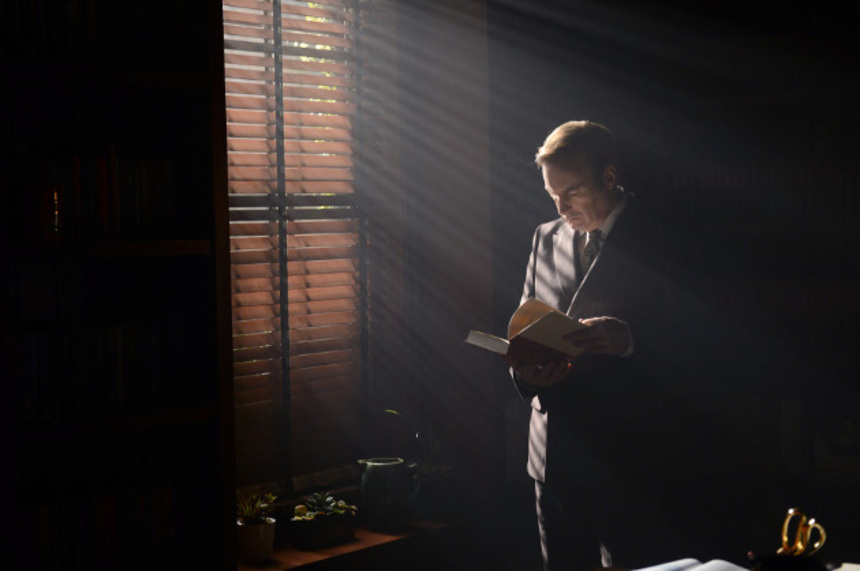 For all of its strengths, one thing Better Call Saul appears to lack is a firm sense of its overall narrative.

Breaking Bad seasons are like lessons in structure, but this prequel doesn't appear to have quite the same composition. Of course, the final two episodes may reveal me to be wrong, but it does seem like Saul has a more flexible approach, something that allows it to do episodes like the Mike-focused instalment and "RICO", which feels much more like a legal procedural than anything else on the show so far.

This more malleable approach to structure hasn't been to the show's detriment in any significant way, yet. For anyone viewing the Kettleman story as the case that would span the season, though, it must seem odd for it to be all dealt with by this point. The show is doing a great job building up the character of Jimmy and the key figures in his life, but beyond the character work it's never entirely clear which of the many plotlines is the most important.

Adding to the many flashbacks we've already seen is this week's cold open, taking us back to a time when Kim was cramped into a tiny basement office, Chuck was a big deal at HHM and Jimmy had only just passed the bar after years of secretive work. It's clear that, as many have suspected, there's some romantic element to Jimmy and Kim's past relationship, and beyond that this is just an illuminating flashback. It establishes just why Jimmy hates Howard so much (that silent scene is masterful - you can just tell what's being said, and not hearing it just reveals the predictability of Howard's dismissal of Jimmy's attempt to work at the firm) and how Chuck's respect means more than almost anything else in the world to Jimmy.

So, to find himself with a big case that he has discovered both through luck and hard work is a huge deal. On the one hand, he needs Chuck's legal expertise and patience to make sense of the case of elder fraud he's found, and on the other he has done a lot of the work because he wants Chuck to be proud of him. He's not looking to exploit his brother's knowledge, he's trying to find a way they can work together. Jimmy wants to be seen as worthy of sitting beside his brother at a legal meeting and he wants his hard work recognised, most of all by the person he's spent all this time looking up to.

This is a very focused episode, all about building the case and finding the evidence (Jimmy spends longer than he'd like digging through the bins to find shredded documents). There's little time for other characters, although we do get to see Mike again as he babysits his granddaughter and tells his daughter-in-law that she shouldn't feel bad about using the money that came from the dirty cops. He has a small involvement in the episode, but the key moment comes when we see him take steps towards more criminal work when he returns to the dodgy vet who stitched up his bullet wound when he first arrived in Albuquerque.

Last week, Jimmy giving up the Kettleman case seemed like a major defeat. But he was doing the right thing, and he's rewarded here with his discovery of the big fraud case. Whether it'll truly pan out into the massive case that Chuck thinks it might be is uncertain, especially with Chuck's ties to HHM and the episode ending revelation that Chuck is more capable of going outside than he expects - especially when he's distracted and not thinking about it. Does a Chuck who is potentially better still work with Jimmy on this case? Does that last scene mean he's cured, and if it does what's he going to do next and what part does Jimmy have to play?

It's certainly going to be interesting to watch this all unfold.

Do you feel this content is inappropriate or infringes upon your rights? Click here to report it, or see our DMCA policy.
Better Call SaulBob OdenkirkMichael McKeanRhea Seehornvince gilligan