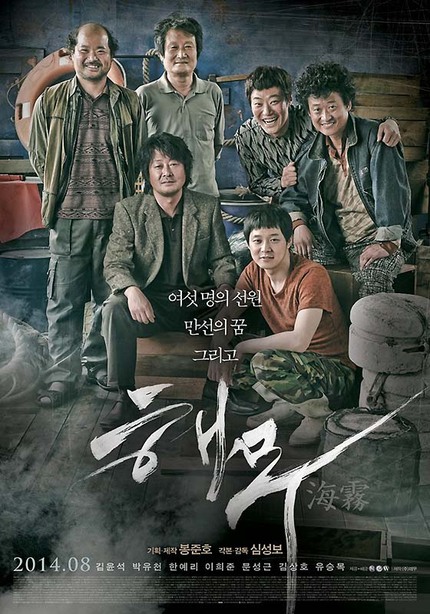 A box office hit in its native Korea, Shim Sung-bo's directorial debut, HAEMOO {Sea Fog} made its New York premiere at Lincoln Center's New Directors/New Films Festival.  Regarded for his screenwriting collaboration with Bong Joon-ho on the now-classic, Memories of Murder, Shim spoke with us about what it took to direct this first feature, having Bong as his producer, and casting one of Korea's top idols.


The Lady Miz Diva:  When you spoke of Bong Joon-ho before we began our interview, you called him your boss.  What is it like to work with him as the producer of HAEMOO, since you have been writing partners for so long?

Shim Sung-bo:  It was like a big umbrella for me, definitely.  For example, the character of Chang-wook would not have been possible if Bong Joon-ho had not been present.  So, that's just one of a lot of examples.

LMD:  Was he supportive and encouraging when you decided to direct your first feature?

SSb:  There really is not a defined line in Korea between an assistant director and a screenwriter.  So, one way of becoming a director is going through the position of scriptwriter.  It's just that in my case it took a little longer than some others, but that's also how complicated the development the Korean movie industry is right now.  Like there was this one script that I worked on for really long time that did not get made into a movie, and that was a love story between a man and a woman, and Bong read all the different versions of that script.  And I believe that my working on or making that type of a love story would serve me well in directing this type of movie in HAEMOO; I think that's why he recommended that I do this.

LMD:  Was the actual experience of directing different than what you had imagined before taking on this film?

SSb:  It couldn't be more different.  Even when you try to be as detailed and specific in your script, when you actually got to the scene on the set, there would be so many holes, and those holes were mostly filled by the wonderful cast.

LMD:  Speaking of the wonderful cast, there's a rather famous pop music idol in your film...

LMD:  Yes.  While he has done television dramas, I believe he only made a cameo appearance as himself in a movie years ago, so this is really his first feature acting role.  What was it about him that made you feel that this person was going to be my romantic lead?

SSb:  I think he was kind of fearless, that was one reason.  He really projected this image of a good person, of goodness, and also I got really good vibes from him.  And it's not that we have a lot of male actors who are well into their 20s, and Yoochun really wanted to do this role.  And you know how if you're an idol, it's extremely difficult for an idol to feel fondness for this type of character.

So, what we believed was, because he would be surrounded by the rest of the cast who are all veterans and amazingly experienced actors; we felt that as long as he could leave his schedule open, so he would have days to shoot together and work with the actors, they would be able to really fill in - that he would really be able to identify and kind of melt into the rest of the actors and be able to do his part just fine.  And he was really so into this movie, that except for a few little schedules that he had to do, he really was able to concentrate on this movie.  And from the level of his management company, that was a very difficult decision to make.

LMD:  The film goes to some very dark places at times, and as Yoochun is such a famous idol, I wonder if there was any pushback or hesitation from himself or his management about portraying some of the darker aspects of the film?

LMD:  Can you talk about working with Mr. Kim Yoon-seok on the role of the captain?  He's like a great mixture of Robert Shaw in JAWS and Captain Ahab from MOBY DICK.  The captain is always a seething, bubbling cauldron of emotions, but you never know how he's going to blow. What kind of notes did you give Mr. Kim regarding playing this character?

SSb:  He and I talked a lot about the scenario.  So, after I met him and he signed on, I actually rewrote the script before we began to shoot, and in the rewrite, the keyword was pathos, or pathetic love.  And before the rewrite, the version before that actually had the captain becoming almost one with the sea fog and kind of attacking Dong-sik and Hong-mae almost like he was going to eat them up.  But during the rewrite, I decided to identify him with the boat - couple him with the boat.

LMD:  How does the Captain justify the things he does? Was he just going crazy? Is this the true essence of what it means to be evil? Thinking of that reminded me of MEMORIES OF MURDER, and I wondered if as a writer, you are fascinated by what drives people to the edge of sanity or morality?

SSb:  I don't think there is any fully evil person in this movie.  We really never talked about it.  It was never spoken when we prepared this movie that we would be portraying any evilness.
The responsibility of a captain is to make the most realistic decisions and determinations.  It's just that it just happens that each of his choices sort of drove not only him, but other people into this kind of valley, into the swamp of tragedy, like a spiral.

LMD:  Watching this film, I couldn't help but be reminded of some similarities - perhaps in the morality of the crew, or the way certain things were handled on the ship with regard to the passengers - to the reports of the terrible Sewol ferry tragedy last year.  I wondered if there was any mention of that from the Korean media?

SSb:  You know, I didn't even pay any attention to it.

LMD:  Now having wet your feet as a director, has it encouraged you to make more films?  Would you consider directing a screenplay you didn't write?

LMD:  Do you have anything planned?

SSb:  I can't disclose that because we are still getting the rights.

LMD:  What do you wish for HAEMOO to bring to international audiences?