Destroy All Monsters: CINDERELLA And The Fairy Tale As Comfort Food 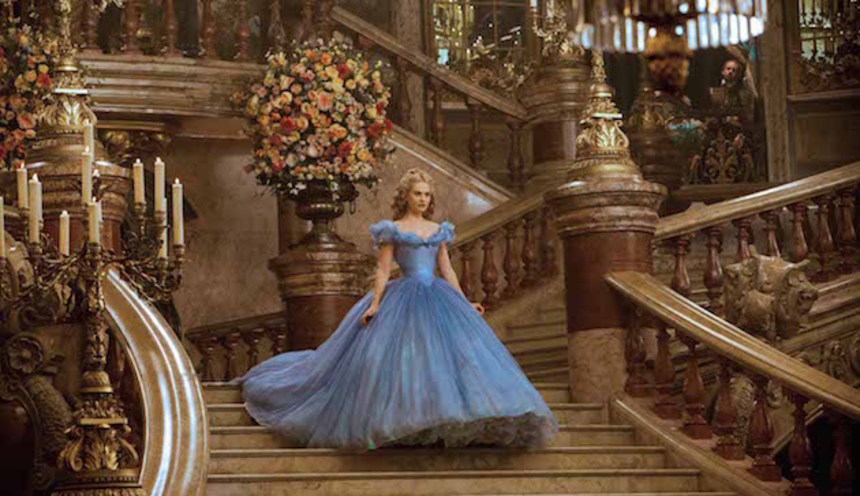 I was rather hoping for a bit more from Cinderella, I admit. It was not to be. Kenneth Branagh's live-action staging of the Disney cartoon of the Grimm fairy tale is perfectly competent, and marvelously dull.

For those following the flourishing "CGI-fortified fairy tale" sub-genre currently minting doubloons in Hollywood, the gargantuan mess of Maleficent, with its dreadfully on-point subtext, was a worse movie than Cinderella but a more interesting artifact. Snow White and the Huntsman was better overall effort, but with a few too many moving parts to be lastingly compelling.

Kenneth Branagh has described the Cinderella story as "sleight of hand," and I'm inclined to agree with him; it's a conjurer's trick, this one, and just as insubstantial. Read our full review of the film here.

In that review, Jim correctly notes that if nothing else, this latest adaptation leans heavily on the "beauty comes from within" angle, making Cinderella's transformation from peasant to Prom Queen seem like an extension of her own inner merit, rather than a cattier, "you must be this pretty to ride" demarcation.

Yes, Lily James is a wildly stunning Disney Princess - but she never seems to think about it, herself. It's a charming enough trick to save the movie from being what it must otherwise be: a startlingly (for this day and age, at least) old-fashioned bit of gender prose. Given that we've recently seen Snow White as a Lord of the Rings and revised Maleficent as a sexual assault survivor, it seems a bit strange to find a Cinderella who behaves just like Cinderella - but with CGI mice.

Secretly, I suspect this is the core of the appeal. We can question and interrogate fantasy gender roles till we're blue in the face, and come out the better for it - arrow-slinging Katniss in the non-fairy tale side of things, or Anna and Elsa's clever emotional throughline in the Mouse House's regular stomping grounds.

(The Frozen sisters even turn up in a pre-Cinderella short film and herald the coming of Frozen 2, as though to reassure kids and parents that a Disney universe where winning the prince isn't the point will be right with us shortly.)

But all of this is right before Cinderella goes ahead and warmly intones that hey, winning the prince and wearing fancy dresses is fine too, if that's what you're after. In a progressive context, it feels more like choice than exclusion. A healthy marketplace is driven by choice, always.

And in any event, business is booming in this part of the forest. Made for a slender (by these standards, anyway) $95M and bagging a cool $132M worldwide on its opening weekend, Cinderella is easily the most efficient and therefore effervescent volley in the genre thus far. Others will make more noise, but Cinderella will likely hold the record for profit for the foreseeable future.

Moreover, Cinderella bears all the marks of a film project with absolutely no illusions about itself or its purpose. Branagh, his team, and his cast know exactly what they're expected to deliver, so they deliver it. No fuss, minimal muss (some artfully directed soot, maybe), and a weather eye keenly on this story's particular horizon: kids who want to go to the ball, preferably in a magic limo driven by a lizard. The end.

There's something weirdly comforting about a movie that is so unabashed in its gender stance; more honestly, perhaps, than Jupiter Ascending, which has also drawn some interesting counter-reactions from audience members (predominantly female) bewildered by that film's wholesale dismissal by (predominantly male) film critics.

Cinderella is so un-subversive that it's almost subversive. It's told wholly from the perspective of its female leads, is ultimately a story about being a good person (courageous and kind, in the film's own words), but delivers its rewards for those values in the most classically Disney fashion imaginable: pretty dresses, a pretty castle, and a really pretty boyfriend.

As a character, Cinderella doesn't change or mature over the course of the story; she's the same girl at the ten-minute mark as she is on her wedding day. It's the movie that changes and contorts around her, as though it's being sucked down a black hole into its own inevitability. Of course Cinderella goes to the ball, wins the prince, runs from the prince, gets found by the prince, and marries the prince. Why else would any of us be here?

It's rote even in its charms, not unlike Kraft Dinner, the comfort food of the masses. Even Cinderella's nemeses - stepmother and stepsisters, all evil; Cate Blanchett and Sophie McShera and Holliday Grainger - can't muster up much of a fight, and are presented as utterly ineffectual. They have no better chance of bringing down Cinderella than Prince Charming has of falling for a footman instead of our heroine.

There's something reassuring in that - and the reassurance is the point, and why films like this will continue to bring in the bags of money. Just as much as kids occasionally need stories to be scary or different or challenging to the patriarchal soup in which they daily sit, they just as frequently need stories to be not scary, and deliver the Happily Ever After they're continually promised is out there.