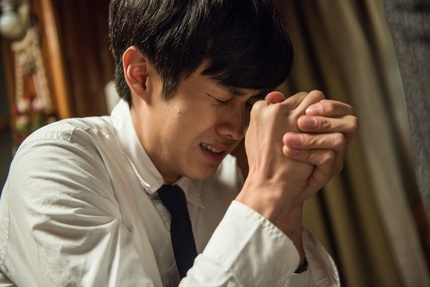 (Here's someone literally begging to be taken to church...)

In Kim Tae-yong's debut film Set Me Free (original Korean title Geo-in), he deals with the memories he has about one of the darkest moments in his own childhood. His parents were both alcoholic and most of the time unemployed, and he was sent to a foster family who took care of many young foster children. That in itself worked out fine, but there was a catch: it was meant to be a temporary solution. As the kids became adolescents, so did the day approach when they were deemed too old to stay with the foster family, and were sent back home. This prospect loomed like a sword over all of the older children, who often didn't have anything to go back to, and this is what Set Me Free is about.

In the film, we follow Jeong-jae, a teen boy who is one of several children living with a foster family. When his friend is sent away, Jeong-jae is suddenly the oldest of the pack, and obviously next. But to avoid having to return to his real father, he has a plan: the couple housing him are devout catholics, so Jeong-jae claims to have a calling from God to become a priest, and he hopes he will be allowed to stay longer because of that.

Becoming a priest means studying hard though, something Jeong-jae isn't good at. In fact, he puts more time in secretly stealing from his foster parents' shop, and selling the goods at school for a quick buck. The thefts do not go unnoticed though, and tension within the foster family rises. Jeong-jae gets more and more cornered, especially when his real father tries to offload yet another child at the same foster family...

You may have guessed it, but Set Me Free is not exactly a comedy. This is a very realistic domestic drama you watch unfold, and a very good one too. Director Kim Tae-yong coaxes incredible performances out of his teenage actors, a remarkable achievement seeing as how this is his first feature-length film. Especially Korean teenage heart-throb Choi Woo-sik, who plays Jeong-jae, impresses. Known in Korea primarily for playing cool and sassy characters on television, Choi Woo-sik disappears into his role, showing only vulnerability, shame and desperation, all tainted by a survival instinct. At the Pusan festival, he won the "Actor of the Year" award for this role, something I will not contest.

It would be very easy to carry the story to spectacularly dark territories, adding abuse, rape, murder, gangsters... but Kim Tae-yong admirably keeps it real, as that is sometimes bad enough already.

It would also be very easy to show Jeong-jae as a despicable character, framing friends for his own misdeeds, stealing, only out for his own survival... but the film plays it more clever than that. You want to hate Jeong-jae, but as the film continues you find yourself unable to. What he does is often wrong, but (bar the stealing, perhaps) you can understand why he does it, and his motives do not always just concern himself. The film also deftly avoids the trap of deifying him or the catholic foster family. None of these people are saints or demons.

All in all, Set Me Free is an impressive look at the plight and confusion faced by many foster children. Not spectacular in the events depicted, perhaps, but the more heartrendingly real because of it.

It surprised me to see this film not being part of the Hivos Tiger Awards at the International Film Festival Rotterdam this year, as I sure would have pegged it as a possible winner. Indeed, previous Tiger-winner Yang Ik-joon (who directed Breathless) shows up in a small role, and I wouldn't put it past him to tease Kim Tae-yong relentlessly for not winning one...

Audiences in Rotterdam sure liked it a lot, and awarded the film with a 3.8 out of five.