Based on Joseph Delaney's The Wardstone Chronicles -- more specifically on the saga's first volume, The Spook's Apprentice -- Seventh Son tells the story of Thomas (Ben Barnes), a young farmer chosen to be the new apprentice of Master Gregory (Jeff Bridges), a Spook whose job is to fight evil forces. Issues get more personal when Mother Malkin (Julianne Moore) escapes from her prison and seeks revenge by destroying everything with her army of evil witches and sorcerers.

As one may deduct from that plot, Sergei Bodrov's film does not have a lot to contribute to fantasy: Seventh Son appears like a mixture of Van Helsing and Buffy the Vampire Slayer, to which basic generic elements were added. The universe depicted in Delaney's adaptation thus seems poorly similar to what cinema and television have been picturing over the past few years, as much thematically as visually.

On that matter, the uneven special effects and photography do not help, which make the overall picture blurry and -- to be honest -- quite ugly. But through this digital mess Bodrov still manages to deliver some good bits of action, as in the introduction and in the later attack of the city, where he shows valuable skills in building up tension in altering the different scales without having to resort to abusive editing.

The main production asset lies in its surprising casting, which allows Jeff Bridges and Julianne Moore to reunite more than 15 years after the Coen's The Big Lebowski. But the seasoned actors seem to not quite know how to approach their characters. This becomes apparent relatively quickly in the film, as soon as Moore's first screen appearance, where she is all dressed up in an overtly gothic and over-the-top costume. In all of her glamour, she plays a monstrous and evil witch, which somehow prevents the viewers from fully believing in what they see; the whole scene seems staged and feels fake. 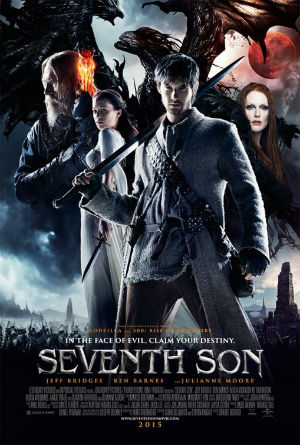 Some of the international cast members often act out of their character too, such as Antje Traue (Zod's minion in Man of Steel), who plays Mother Malkin's sister in an embarrassing, one-sided, and deadly serious way. This unilateral perspective, with which the whole film is mainly conceived, eventually drags the film towards ridicule.

Not too far from the universe of Narnia for which he did two films, Ben Barnes tries his best as the 'young' male protagonist and delivers a better performance than that of the eponymous role he had in 2009's Dorian Gray. Unfortunately, bad characterization prevents him from being entirely convincing. In the end, only Bridges seems to know what to do with his character, shifting between the drunken and falsely stupid man to the grumpy and yet funny old master.

Knowing that Joseph Delaney's saga is not as popular as other literary sagas, Seventh Son might struggle to fill theaters. The clichéd romance and the overall poor script will not help the word of mouth, but despite its generic and uninspired approach, Bodrov's film should satisfy the biggest fantasy fans, as it offers its fair quantity of action and creatures of all kinds, with everything being enhanced by Marco Beltrami's loud orchestration.

Do you feel this content is inappropriate or infringes upon your rights? Click here to report it, or see our DMCA policy.
Ben BarnesJeffrey BridgesJulianne MooreMarco BeltramiSergei Bodrov