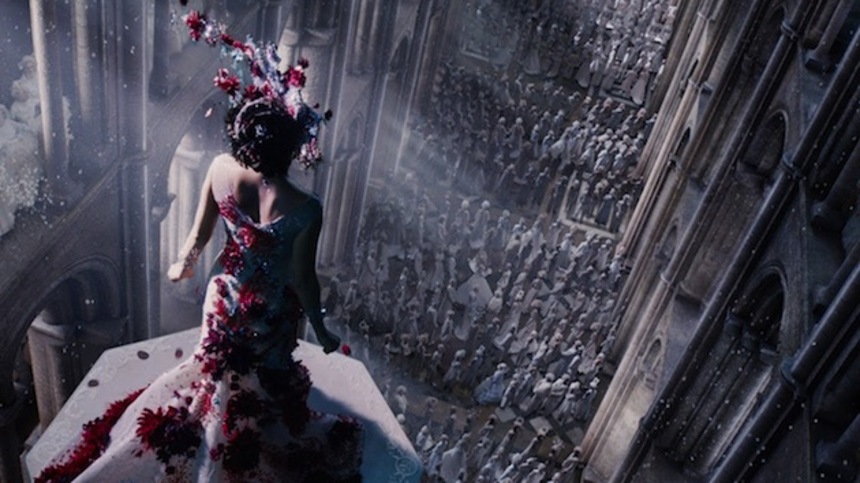 Originally set for June 2014, the Wachowskis' new blockbuster was eventually postponed to February 2015 with a diminished, low marketing campaign. Everything seems to indicate that Warner Bros don't believe in the film anymore, despite their massive investment. Yet, Jupiter Ascending proves to be very entertaining and although it suffers from a contrived script, the film still manages to offer a rich universe and great kinetic sequences.

Somewhere between Charles Perrault's work and the Star Wars space adventures, Jupiter Ascending uses a similar narrative structure as that of fairy tales: Jupiter is a poor woman working as a cleaner who discovers herself to be of high importance within the universe. When she's targeted by vile members of the Abrasax family, Jupiter is rescued and protected by Cain, a half-man, half-wolf former extraterrestrial soldier.

By contextualizing the archetypal structure of fairy tales within the codes of science fiction, the siblings took an ambitious and fascinating bet. Sadly, the result doesn't quite convince because of narrative arcs that seemed to have been imposed to meet the expectations of the widest audience possible. The clumsy comical attempts and some of the less elaborate narratives are quite unusual for the Wachowskis, notably when one thinks of the successful experimentations they undertook in Speed Racer and especially in Cloud Atlas.

These concessions and sacrifices tend to disappear before the fascinating universe that the Wachowskis designed - they have notably displaced the place of Earth within the universe and proposed to rethink the history of mankind. The richness of their creation extends as much to numerous alien species as to technologies and weaponry, which offers them the possibility to go against the conventional aesthetics of film.

For instance, Caine's gravitational skates blur the geographical references, as horizontality and verticality are sometimes hard to distinguish. As such, all the action scenes set in Chicago have something new to propose, like the futuristic scenes in X-Men: Days of Future Past with the vortex created by Blink.

What impresses me the most with the Wachowskis is their science of image and movement. They always manage to display awe-inspiring frames and fluidity. The most incredible scene in Jupiter Ascending is a perfect example of this, when Jupiter and Caine are being hunted by a fleet of aliens. From the top of a skyscraper, they start a vertiginous fall which turns into one of the most exhilarating and inventive action scenes we've seen these past few years. Twirling in the air, the camera seizes this explosive ballet in the air where circularity appears on every level. The viewer is so involved in the scene - physically and rhythmically - that he is left gasping for air.

Throughout this intergalactic journey, actors navigate in their respective characters. While Mila Kunis is not always convincing, Channing Tatum proves to be a great fit to his not-so-talkative and wild character. Amidst the numerous supporting roles, Eddie Redmayne's is probably the trickiest, as Balem is sickly but choleric and whispers more than he talks. Sadly, the attempt is not really convincing, though to Redmayne's credit the fault seems to be due more to the character's concept than to the actor's performance.

In the end, Jupiter Ascending appears to be an experience as pleasing as it is frustrating. Realizing how rich and wide the universe created by the Wachowskis is, one cannot avoid being disappointed to be getting only fragments of it. Because of the financial necessity of the film to reach all kinds of viewers, the siblings had to make a few compromises along the way.

But despite its many qualities and its successful combination of elements, Jupiter Ascending might have a hard time finding its audience. This is mainly due to the directors' tendency to depict a colorful universe and heterogeneous characters, which eventually pushes the film to the limits of ridicule - which was already the case with Cloud Atlas.

If the film never falls into this extreme, its total lack of cynicism may encourage some viewers to mock it. This is a very unfortunate behavior, as I consider Jupiter Ascending as what's best in contemporary blockbusters: one that dares to take some risks, even if this means getting bruised along the way.

The Wachowskis propelled Jupiter Ascending beyond the nebula of mass production and continue to fight against aesthetic enslavement. And for that, one can only thank them, and embark with them on their journey to the edge of the universe.