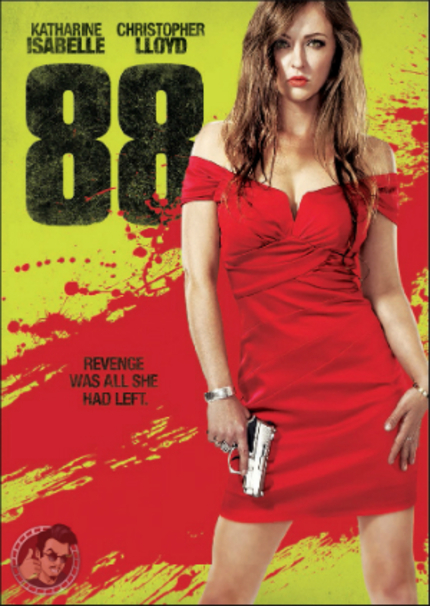 In British bingo, if the number 88 comes up, the caller will shout, "Two fat ladies!", as a conventional code for the two figures' pictographic appearance.

Similarly the title of April Mullen's 88 represents a conundrum in need of decoding: the numeral itself recurs in different contexts throughout the film (whether as the number for various motel rooms or street addresses), while its two sinuous, Moebian digits reflect visually the shape of the two parallel, looping timelines that constitute the film's elaborate circular narrative. There are even two (lean) ladies here, although timid Gwen and tough Flamingo are in fact the split personalities of one woman, and are both played by an actor with past form in Jekyll-and-Hyde roles, Katherine Isabelle (Ginger Snaps, American Mary).

If all this sounds like spoiler territory, rest assured that it is not. For whereas the lost highways and winding LA drives down which David Lynch likes to take his characters and viewers alike are disorienting psychogenic fugues without immediately clear signposts or charts, 88 opens with text formally defining a fugue state ("a rare psychiatric disorder characterised by an amnesia-like dissociation from one's personal identity and history... usually triggered by a traumatic life event"). So from the outset, we know roughly where we are headed, and so, in this Lynch-lite landscape, all that remains is to see how the film's different locations and fractured timelines will map out eventually into a coherent whole, with Gwen's trauma the primal scene and key to all that follows.

Beginning and ending in medias res, 88 shows a confused Gwen in a roadside diner, unsure how she got there or why she has so much gum - and a gun - in her handbag. After shooting a waitress in a dazed panic, Gwen flees into the sunshine outside - and from here the story flip-flops between Gwen in the present, struggling to retrace her steps, and her bad-girl alter ego Flamingo, raising all kinds of hell in the past. Neither personality has a very clear memory, but both are convinced that nightclub owner Cyrus (Christopher Lloyd) and his gang are responsible for the murder of Gwen's boyfriend Aster (Kyle Schmid), and so make common cause with the motor-mouthed Ty (the film's writer Tim Doiron) who has his own vendetta against Cyrus. Meanwhile, sympathetic Sheriff Knowles (Michael Ironside) follows a trail of bodies and bullets, as confused as Gwen herself is about the young woman's erratic movements over the past few days.

88 comes with identity issues of its own. On the one hand it seems to want to be a ludic brainteaser, pitched somewhere between Mulholland Drive and Memento, with a puzzling narrative structure that keeps folding back in on itself - but any viewers inured to this kind of film will be way ahead of Gwen in the quest for meaning, while probably wishing they were a lot more lost. On the other hand, this cross-country caper of strippers and gangsters, cops and arms dealers, delights in the pulpiest furnishings of genre, with Mullen and her regular writer Doiron (Rock, Paper, Scissors: The Way of the Tosser, GravyTrain, Dead Before Dawn 3D) reserving for themselves the most deliriously over-the-top roles (Mullen plays ADD-afflicted gun seller Lemmy).

If generous, one might ascribe all this hyperrealism - the hyped-up shootouts, quirky characterisations and mercurial shifts in tone - to Gwen's fugitive imagination, but in order to follow how she gets from A to G, each of these hard-boiled episodes is a necessary coordinate on a map that must be taken largely as read. It does not help that Isabelle, though effective at making her dual roles easily distinguishable, struggles to make either remotely engaging, stuck as she is with a character whose actions are always driven by a comicbook mode of madness rather than by any more relatable qualities.

While the titular number 88 keeps recurring in the film (alongside a surreal milk-drinking motif) to mark the persistent return of Gwen's repressed memory of trauma, it too in the end becomes an emblem of the film's irrational plotting. Yes, it makes sense that the significant number should have lodged itself insistently in Gwen's otherwise dissociative mind; and yes, it makes sense that she should therefore unwittingly keep requesting motel rooms with that number; but the wild coincidence that it should also be the number of not one but two fixed addresses (one on the astrologically named 'Constellation Road') crucial to events both past and future seems a plot contrivance too far, serving the film's title more than any plausible reality.

So perhaps 88 is best enjoyed as a crazy, sub-Tarantino explosion of clashing styles, brazen flourishes and grand genre gestures on the backroads of American cinema, with the plot really just a hinge for all manner of B-movie posturings. If you are looking for genuine insight into the more labyrinthine workings of the human mind, better to stick with Lynch - but if it is pure filmmaking brio, rather than brains, that you seek, well, bingo!

The film enjoyed its theatrical premiere at FrighFest Glasgow 2015. Visit the official site for more information.