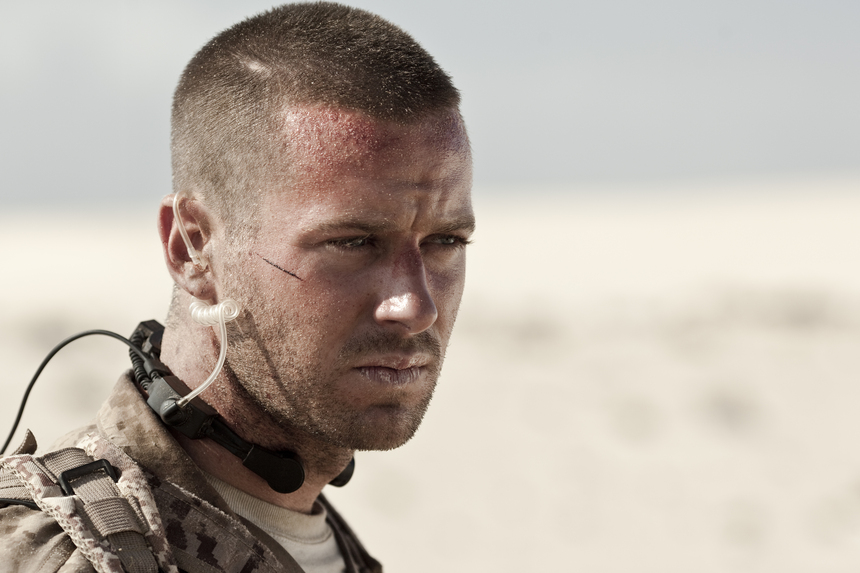 The Italian co-directing and writing team of Fabio Guaglione and Fabio Resinaro, whose short film Afterville won the Melies d'Argent at Sitges in 2008, are hard at work in post-production on their first feature directing job, Mine. (True Love, which they wrote and produced, played the festival circuit in 2012/2013). A Spanish-Italian-US co-production, it's produced by Peter Safran (Buried, The Conjuring) and M.A. Faura (Painless, Enemy).

If that isn't enough great genre pedigree, The Lone Ranger's Armie Hammer stars. Shot mainly in the Canary Islands, Mine is a psychological thriller about a soldier who, after a failed assassination attempt, finds himself trapped in the desert, where he must battle nature, guerillas, and his own deteriorating mental and physical state.

We've got two exclusive photos for you, one from the film, and the other a behind-the-scenes shot of the two directors. I spoke with Fabio G. about his first feature, the challenges of working in a foreign language, and the possibility of a new wave of Italian fantastic genre cinema.

Your shorts and True Love, are definitely sci-fi in setting, but seem to be less about technology or the impact of science, and more about human psychology.

Fabio R, my work partner and I, are interested in science fiction and its symbols and how they can be used, but we think a good story focuses on a good question or a good conflict. Most stories try to answer the question, 'Who am I?'. We like to create an interesting setting, and add that question in. Our shorts films, like Afterville, have a big scope, but we focus on a little story, such as how these big things or changes affect the protagonists. We think it's a consequence of being European, we grew up on American movies and Japanese animation, in the middle of different cultural influences. We are interested in intimate stories, that start from a protagonist's struggle. Even in a film like True Love, which has a cage in which the main characters are caught, that uses technology and spying, we use the genre to create symbols, and then use the symbols to tell a story that has many layers, more about something unconscious.

Why did you and Fabio R. decide to direct your screenplay, when you didn't direct True Love?

Mine was a story that we felt very closely. So it's got the war setting, but it's about that intimate psychology that we like to explore, about the next step you have to take in life, about survival. It came at a delicate point in our careers, and we felt it was a script we had to direct. And also, it was a big step into the industry, with a big producer and Hollywood actor.

How did Armie Hammer come on board?

Peter Safran knew that we needed a big name, and when he thought the script was ready, he talked to a lot of agents. We met a lot of actors, and our first impression of Armie was really good. We had seen him in The Social Network and The Lone Ranger, and we weren't sure at first, he was quite different from how we pictured the character. But as Peter pointed out, Armie had worked with directors like David Fincher, Clint Eastwood and Gore Verbinski, then he has something. And when we met him, we could see the difference between him and the actor, but he was obviously very versatile. We knew, and he knew, that he could transform himself for this role. And this is a very different role for him, I don't think the public has seen what he is capable of as an actor. He's done something really amazing in the film.

Were there particular challenges, working on a US production, working in a foreign language?

We are familiar and obsessed with language. When we translate from Italian to English, it's a bit of a painful process. My language teacher told me that every translation is a betrayal. But what is interesting in directing a film that's not in your native language, you constantly have to ask yourself, is this really what I meant when I wrote it? Is this really how I want this to be said? We worked with the translator, and with the actors, to make sure it's the best expression. We have the script, but things can change, as we work with actors to find the right words.

When you shoot the movie, you can get really tired. My english sometimes would fall apart, I wasn't sure if I was always understood, if I tried to tell Armie to do something, my words would just trail off. But it seemed to work.

Other than the Giallo years, Italy isn't really known for its genre work, apart from small films that travel the fantastic festival circuit. Do you think there is a stigma in Italy against genre film?

Yes, absolutely. The industry is made by an older generation that don't understand fantastic film. Things are changing, but painfully slowly. But there is a new generation of people, working in film, web series, comic books, that are pushing for this. New technologies are opening a lot of doors, and it can be scary for a producer that might be establishing his or her career  in comedies or art films, to understand that a bunch of filmmakers can make a low-budget film and sell it internationally. Now in Italy, there are a few producers who are starting to understand this and taking the risk. It's a painful process, but I think if the young generation makes some good films that get attention, it will help. There is so much talent in Italy, we just have to work against the stigma and get more people, more producers, to take the risk. True Love was a low-budget film, but it was financially successful, and we need more films like that, more Italian genre movies to work.

Do you feel this content is inappropriate or infringes upon your rights? Click here to report it, or see our DMCA policy.
Armie HammerFabio GuaglioneFabio ResinaroM.A. FauraMinePeter Safran