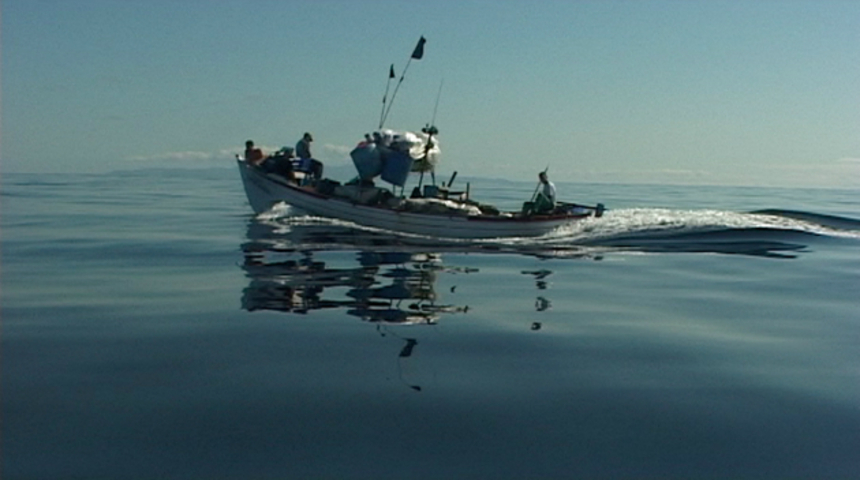 Fish Tail by Joaquim Pinto and Nuno Leonel is an essayistic scream for freedom beyond globalization. Set in the village of Rabo de Peixe (translates "fish tail") on the Azores, this follow-up to Pinto's acclaimed What Now? Remind Me is another personal observation in which cinema is created from life instead of the other way around.

Although the film is also a personal and highly intimate endeavor, it is mainly concerned with its political and documentary subject: The faith of small scale fishermen in the shadow of global industrial overfishing. It follows young fisherman Pedro and his peers as they struggle to survive with new laws. The film was shot between 1999 and 2001 and was initially broadcast once in a 55-minute version for Portuguese public television.

It shows the daily struggles, gives voice to the affected people, and is also a reflection on the shooting itself as Pinto and Leonel speak about their experience by turns. One can clearly feel the love the filmmakers feel for those workers and sad souls as a poetic mood of soft spoken sorrow gets established.

In re-visiting and re-editing their material, they not only create a strong testament of time but also extend their film to a dialogue between the filmmakers and the filmed protagonists. One can feel the trust and friendship, and the curiosity for life on both sides. In an outstanding scene, they hand the camera to a group of young boys who shoot some handheld footage: When you are interested in our work, we are interested in your work.

Naturally with Pinto and Leonel, the sound plays an important role in giving a cinematic quality to the home video-styled images -- which does not mean that there isn't visual bliss in the film. The constant changes between the harshness and the dirt of reality with the beauty and romantic loneliness of the work creates a fascinating look at this particular way of living. One can sense the danger in the work as, for example, boats almost collide when they finally discover a stream of fishes.

The filmmakers tend to drift with what they find and construct associative connections between seemingly random incidents. At one point, they help a young fisherman in a swimming pool overcome his inability to swim. Everything seems to be peaceful when the practicing young man suddenly drowns. They jump in the water and save him. After a while he overcomes his fear and swims. Almost all emotions connected to the rest of the film are in this scene: the struggle, the fear, the menace, the seductive power of water, the intimacy, the helpfulness, and the loneliness.

Sudden hip-hop interludes create an interesting and modern contrast to the Visconti-like romance of poverty. There is something coincidental to Fish Tail that also has a political necessity today as the film clearly shows how Europe might have become for Portugal what it is now: a danger for existence where governments are unable to help the poor because they don't give them the camera, the voice, and the time.
Sign-In to Vote
Tweet Post Submit