Berlinale 2015 Review: AS WE WERE DREAMING Dreams About Lost Emotions But Never Really Touches 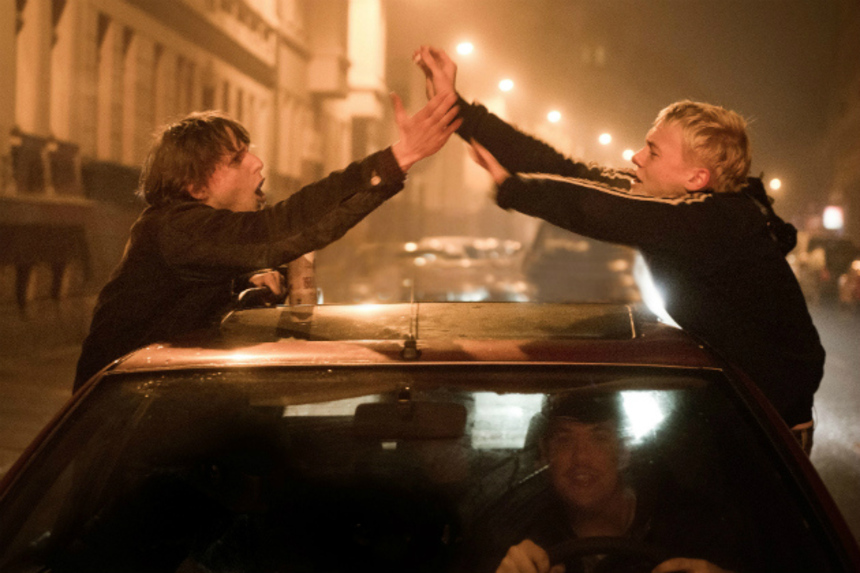 Andreas Dresen's As We Were Dreaming, an adaptation of a German bestselling novel by Clemens Meyer, tries to change our perception of what happened in East Germany in the time after the collapse of the Berlin wall.
Instead of presenting daily life in post-wall Leipzig as a depressing and rather boring endeavor, the film is a portrait of ecstatic and anarchic longing. But it tries so hard to film these feeling of a group of young boys that it just feels unreal and distant. All this energy and all these lights are merely a predicable effect and never really come across as something true.

The screenplay is written by Wolfgang Kohlhaase, an almost legendary screenwriter in Germany, but As We Were Dreaming may be his first real failure. The same is true for Dresen, who usually is great in developing empathy for seemingly real people, whereas here, he just films fictional figures out of a novel. The dialogue scenes, especially, are embarrassing. It almost feels as if someone was reading a book. Like so often in German cinema, something very conventional tries to show something very revolutionary. It again does not work at all.

The film follows four friends (Rico, Daniel, Paul and Mark) and their different stories in two time periods. Basically it is a story about those teenagers longing for a different life and ultimately realizing that those dreams are utopian. They are very much into fist fights and are trying to open an underground techno club and "get some" or, because it is more romantic and conventional, the one and only girl.

Except for Daniel, no one in the group seems to have any conscience. There is violence and other criminal activity but in order for us to like them anyway, there are of course some dull skinheads who try to establish their power in town. There is not one single noteworthy performance in the film.

Of course, there are some sensitive moments in the movie, such as when Daniel tries to help and change his friends in the second half of the film. There is also a great moment of tender tension when he accidentally hides in the kitchen of an older and very horny woman. Dresen cuts in many flashy, strobe-light intertitles like "Murder in Germany" that structure the film and are at the same time emotional slogans. About ten times, loud techno music fades in and, although I am not what one would call a Xavier Dolan fan boy, those moments feel so cheap in comparison that my respect for the young Canadian suddenly grew.

Another obvious comparison seems to be to Oliver Assayas. The superposition of memory, politics, anarchy, music and movement unites Dresen and Assayas but the latter is able to capture a feeling for the decades he is filming, whereas in As We Were Dreaming there always remains a strange distance that is not nearly cold enough to be interesting.

Moreover, the revolutionary and coming-of-age energies are always connected to narrative morality instead of true desires and awakenings. Maybe there is a difference between France and East Germany but then why try to be so loaded with energy? The cracking dreams never feel possible because from the very first scene on we know that they will not come true.

By avoiding nostalgia, Dresen may please some viewers but in fact the film lacks any position in terms of filmmaking. The political point-of-view is clearer as the unification of Germany gave room for a short period of dreams that ultimately did not come true. All the characters and plot twists in the film try to show us this specific idea instead of trying to show us what life felt like.
Sign-In to Vote
Tweet Post Submit