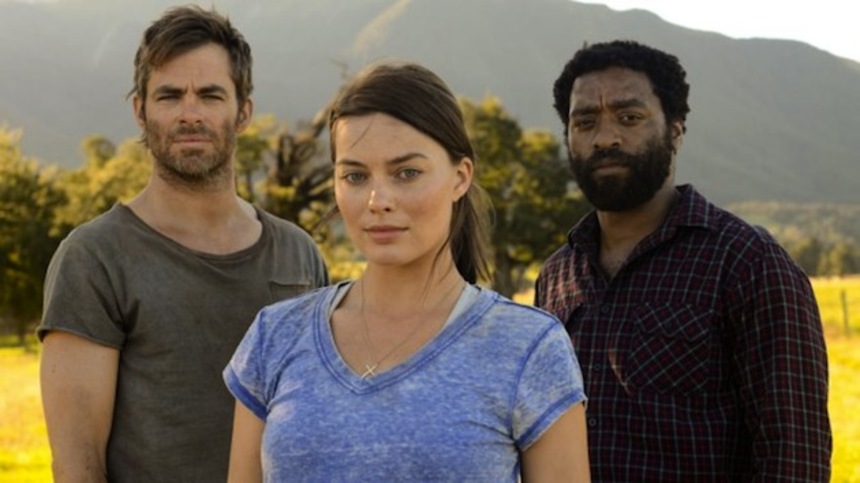 The premise is beautiful in its elegant simplicity - a woman is left alone in a world that has befallen a catastrophe. Her solitude is interrupted when a man appears, unsettling her life and making radical changes to her situation. Things begin to settle when a third person appears, unsettling the balance even further.

Director Craig Zobel shocked audiences with his beautifully realized Compliance, but with Z for Zachariah I believe he has crafted something even more remarkable. The story, based on a 1974 novel by Robert C. O'Brien, feels at once highly contemporary and relevant and ancient, the very kind of parable that would fit within the Biblical motif.

The symbolism the storyline plays with is sometimes arch, but that plays into the films narrative strengths. If A is for Adam (as per a book that is found on a bookshelf), then we're skipping to the end, the last letter, the ending that serves as a new beginning, or the omega becoming an alpha. There are other overt references, including some that would ruin a few narrative surprises, but these are done with a soft touch.

More overt are the dialectical oppositions that the film toys with, the divide between faith and science, or love and hate. These are big ideas and big feelings, yet the film never gets lost when trying to unpack the swirling interpersonal dynamic of the characters.

Despite the claustrophobic setting, the film never feels limited or "stagey", its location as throttling as the storyline requires without feeling the scope of the situation.

One could get lost in some of the exegetical meanings of the film's title and its character names. Loomis (Chiwetel Ejiofor), Caleb (Chris Pine), and Ann Burden (Margot Robbite)  are as rich and overt as many of the film's themes, while the Biblical prophet that gives the work its title lived through a process of destruction, rebuilding and challenges to both faith and intellect.

Yet despite the profundity of some of the story' philosophical elements, this isn't merely some somber intellectual exercise. The film is equally deep with its emotional displays, with some moments that are shatteringly effective at making one empathize with the characters.

None of this would work without some supremely capable performers, and Zobel has assembled a trio that are equal to the task. Ejiofor has the greatest range of emotion in the piece, and he plays Loomis with a grace and sophistication that's hardly a surprise at this point to anyone paying attention over the last several years. There are subtle echoes in the narrative to Children of Men, another near-future thinkpiece that mixes deep ideas within the context of an accessible genre film.

Ann is played by Margo Robbie, and does so with a subtlety and effectiveness that's to be applauded. It wasn't until the film was over I realized she was the same person who helped make Wolf of Wall street so raw and effective, and it's a credit to her range and skill that she becomes completely subsumed in this role in a way that it's almost impossible to reconcile the same person playing both parts.

Finally, there's Chris Pine, who is perfectly cast in his role, one that's perhaps slightly underwritten compared to the others, but nonetheless is imbued with some delightful moments.

Behind the broader emotional beats are some deceptively simple moments that are absolutely wrenching. One standout sequence involves the simple act of catching a bottle at the bottom of a lake, where in the flash of recognition on a face we can see the agony of being alone more eloquent than any dialogue scene conveys. Similarly, some beautiful visual filmmaking uses tiny gestures - a closeup of feet on a rock ledge, or the movement of a glass on a table, to provide the film with some of its most wrenching moments.

Zobel's direction and Nissar Modi's adaptation take liberties with the original narrative, and we're left with a poetic conclusion that might leave some audiences cold. For me, however, this is a film of such power and wit that I couldn't help but being captivated by it. It's early going to be sure, but this is a film that I can easily see being one of the best of the year, a subtle and sophisticated tale filled with raw emotions and ancient story motifs. This modern parable straddles dexterously the line between a heavy ideas film and one that provides an emotional barrage, an effort that firmly establishes Zobel as one of the more dynamic and exhilarating directors working today.

Z for Zachariah is a gem of a film, a deeply affecting and effective work that's not to be missed.

Do you feel this content is inappropriate or infringes upon your rights? Click here to report it, or see our DMCA policy.
Chiwetel Ejioforchris pinecraig zobelmargot robbieSundance 2015z for zachariah