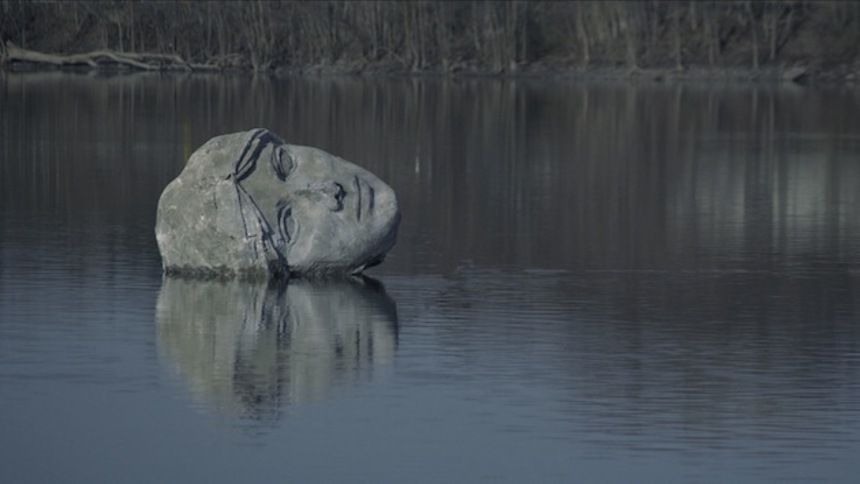 There's something strange in the waters of Troy, New York. Something life-changing in the skies. Some of us can see it, some of us can hear it. Some of us will wander into the woods to find it, leaving our friends and family at home to wonder. The curious pieces to this puzzle will remain floating in our mind's eye, reflected in a stone face, resonating in mysterious frequencies across radio and TV.

This is the nature of Rania Attieh & Daniel Garcia's third feature, H. a science fiction experiment that works in allusions and iconography all the way from the epics of Homer to small town stories of Raymond Carver.

Much like their previous film, the delightfully off-beat Recommended By Enrique, Attieh and Garcia are fascinated by the possibility in constructing a modern American Mythscape. This leads them to esoteric borderlands like the small Texas town in Enrique, and the lustrous decay of a place like Troy.

In this town of Troy we follow two women named Helen. Middle-aged Helen (Robin Bartlett) lives with her husband Roy (Julian Gamble). They have a fairly quiet existence, easing into their later years with a complacency and routine that merely shows the cracks in their marriage. Childless, Helen fosters a life-like newborn baby doll named Henry, a reborn angel so she and her group of hobbyist/mothers say.

The younger Helen (Rebecca Dayan) is an artist living and working with her partner Alex (Will Janowitz). They have just gone through a rough patch in their relationship, but are for the moment together as she's a few months pregnant.

The film is split into 4 clearly marked chapters and a non-titled epilogue. Each Helen is given two separate chapters, their stories mostly interlocking in the strange phenomena that begins to bewilder the entire town. This is where the film gets potentially very exciting. Screws rise in the air, coffee leaks through the mug and then the table. A black horse runs wild in the streets, ; what is assumed to be a comet crashes nearby; people enter a zombie like trance. The explanations for these happenings could go a number of ways from parallel universes overlapping, to solar storms messing with the Earth's electrical fields, to the magnetic poles flipping. It's all very enticing stuff that helps express the dissonance found in both couples' existences.

What frustrated me with H. is that it struggles to articulate its own inherent strangeness. Now, there is no need for a clean-cut explanation for the phenomena that we are witnessing, but there does need to be an intrinsic understanding of its elements and how they fit together by the filmmakers. The film only feels halfway there, in that Attieh & Garcia, by all intents and purposes, should have gone further out there, and experimented even more for a greater resonance with our inner and outer cosmos. It is that potential, that possibility of the utter fantastic that brought about such disappointment on my part.

What I was left with then was indifference to the results, a curious smirk or nod at the notion of a great idea, a provocative image or a wonderfully bizarre sound effect. It's puzzle pieces like this, however scattered, which will keep me coming back to Attieh & Garcia's future films, holding out hope that with one or two more under their belt they fulfill the promises which whisper all throughout the uncanny realms of H.
Tweet Post Submit

Do you feel this content is inappropriate or infringes upon your rights? Click here to report it, or see our DMCA policy.
daniel garciaH.Rania AttiehSundance 2015troy new york