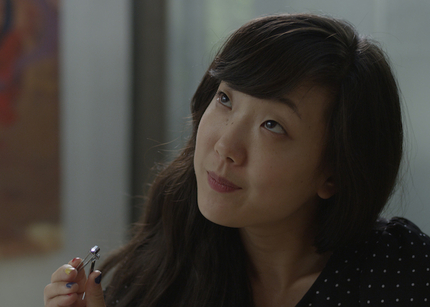 Sex. We wouldn't be here without it. And we sure do like it. But who wants to talk about it? Especially all those particulars...

Filmmaker Jiyoung Lee is ready to though, and her intelligent, equally charming and cheeky examination on female sexuality and desire in Female Pervert is damn fine proof.

Phoebe (Jennifer Kim) is a computer engineer/designer working for a boutique PR firm in some affluent, semi-rural part of America. She lives on a beautiful plot of land in a post-modern house that came cheap because of the toxic spill that happened nearby a few years back. To counteract any toxins she constantly snacks on blueberries. She can't stand hearing her earwax moving around, is part of a book club that reads exclusively Murakami. She is curious about men's chest hair, but abhors armpit hair and pubic hair. The objective of her latest video game project is to pop black heads and pluck that unbecoming body hair. She has a theremin and hopes someday a man will play it with his penis.

Phoebe actually can't stand most of the men in her life --  they are either obnoxious, arrogant, meek, pretentious or a dreaded combo of all of the above. Most of them bore here anyway, even disgust her. Perhaps their only benefit comes in the delight she gets when objectifying them. But she's still lonely. Though is there anything actually wrong with that?

Phoebe's casual encounters with an off-beat assortment of characters is episodic in nature, with Lee breezily doling out serious questions of what it means to be a woman in a patriarchal society that clearly thinks it's past all that. Phoebe is aggressive but unsure of herself. She knows what she likes and doesn't like, but fails in attracting like-minded partners because the need to trim pubes, play a theremin with a penis or chest hair is then just deemed weird and wrong. She obsesses over an old blog, "Does This Shirt Look Good On Me?", which consists of pictures of an anonymous man posing only in shirts. The film's other big questions are aimed squarely at the guilt and shame Americans especially seem to pile on their sexuality. Is the labeling of' personal preferences as perversions a form of censorship, then?

What strikes the balance here is that Female Pervert isn't afraid to laugh at itself, for Lee knows that if we're gonna get anywhere in the talk about sexuality and gender, laughter is the best medicine to uproot and examine such things. While Phoebe and her book club obsess over morals and ethics in various cultures, the film also isn't afraid to play into crass bodily humor. From the awkwardness that comes from farting on the massage table, to that one time ants were lured to Phoebe's childhood box of earwax balls, Female Pervert is filed with delightfully awkward asides that adds to its charm.

Jennifer Kim's wonderfully shaded turn as Phoebe is what sells most of these. For Phoebe is eager to not give a shit, sure, but Kim's portrayal here is not of a bitch, or a woman on the edge of a nervous breakdown, but of a woman willing to be herself no matter what the consequences. It is not to be a woman under the guise of male-dictated constructs or labels. Oh, so is she a feminist then? Hey, pal, be careful, she doesn't like that word.

While Female Pervert is nowhere near as fancifully stylized as actor/director Adrienne Shelly's films, I was reminded here of the existential morose that sits comfortably behind the more quirky elements of such works as Suddenly Manhattan and I'll Take You There. Like Shelly, Lee is winking at both the men and women in her audience, asking them to please look at themselves and others around them with a little empathy, because only then can you be honest. For it's not about being uptight, it really is about censorship and oppression, and what's not okay for a woman to do, but okay for a man to do.

And that's serious stuff. But damn funny, too. And if we're being honest with ourselves, truly human.

Do you feel this content is inappropriate or infringes upon your rights? Click here to report it, or see our DMCA policy.
female pervertjennifer kimjiyoung leeslamdance 2015slamdance film festival