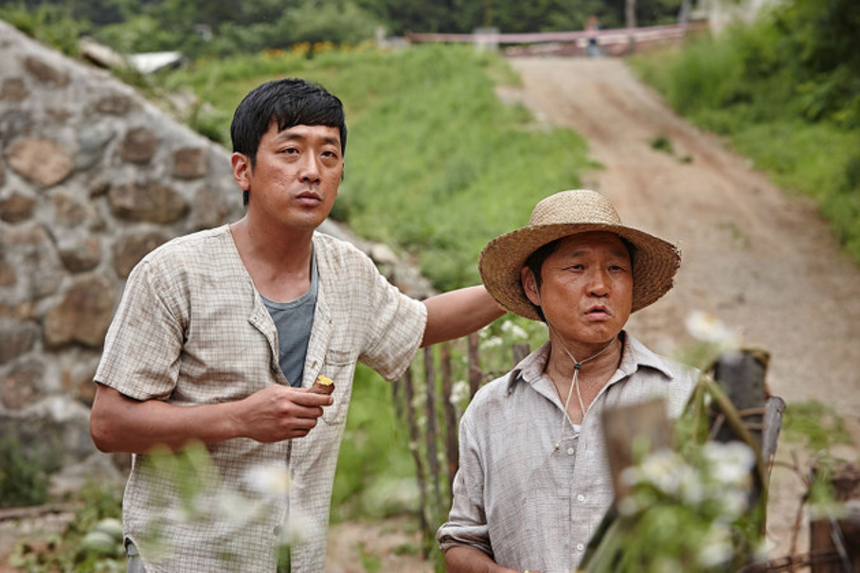 Outside of indie cinema, actors directing themselves in leading roles are quite rare in Korean films, making Ha Jung-woo's Chronicle of a Blood Merchant something of an oddity. One of the country's biggest stars, Ha surrounds himself with a wealth of acting talent in an unassuming period-set comedy-drama that ultimately steers into histrionics.

In a country village just after the Korean war, a factory worker falls for the most beautiful girl in town. Penniless, he sells his blood to fund their courtship and before long they are married. Eleven years later, the couple have three sons and live a comfortable life, but things take a turn when a blood test reveals their eldest boy is not the worker's son, but rather the child of the wealthiest man in town, who carried on a relationship with the wife before she met her husband.

Ha's sophomore film, following 2013's sky-high comedy Fasten Your Seatbelt, which he did not star in, is a handsome feature with plenty going for it, but it also features problems that often plague actor-director films. It's clear how much Ha loves actors, as he gives meaty roles to a host of talented supporting players, but though this leads to strong performances and a number of good scenes, it also comes at the expense of the story.

Chronicle of a Blood Merchant is peppered with colorful side stories, each animated by actors reveling in their parts, but the film's main narrative thrust comes off as simplistic by comparison. Once the family dynamic is shaken there isn't much left to happen than for its members to come back together again, and that's about as deep as the primary thread gets. It might have been alright if the film finished following the resolution of this rift but instead it introduces a significant melodramatic contrivance and totters on for another 25 minutes, abandoning all other side plots and focusing squarely on eliciting an emotional reaction that feels both unearned and overblown.

Ha's film is based on a famous novel by writer Yu Hua, which is set against the backdrop of China's cultural revolution. Though the story is more or less the same, Yu's work is rooted in its socio-poltitical context, while Ha depoliticises his adaptation. Keeping the family framework, he infuses the film with a less serious tone, which seems a shame, given the potential of the time setting, which begins in the aftermath of the Korean War and mostly takes place in the early days of Park Chung-hee's authoritarian regime. Granted, the former president's daughter is the current chief of state, so perhaps this was a move motivated by prudence.

Bringing his easy charisma to the main role, Ha is a fine lead, balancing just enough humor and empathy to a character that is admittedly simple-minded but not without nuance. Importantly, given the large cast, Ha never overshadows his co-stars and seems to have an easy chemistry with all of the talent on screen.

Looking at the rest of the cast, Korea's veteran character actors all add weight and depth to the proceedings, even if some of the roles feels somewhat removed from the main storyline. Among them are Cho Jin-woong, Jeong Man-sik, Lee Kyoung-young, Sung Dong-il, Joo Jin-mo, Kim Sung-kyun, Jang Gwang and Kim Young-ae. Admittedly there aren't many women in the film, and faring least well among the main cast is co-star Ha Ji-won as the wife. There isn't really anything wrong with her performance, but the way she's written as a winsome modern day girl that would fit the Korean term aegyo (cute) to a tee is a little disappointing.

Creating a strong period atmosphere through its wonderful production design, particularly during outdoor sequences, Chronicle of a Blood Merchant offers a strong backdrop to a number of good, dialogue-heavy scenes. However, with a weak narrative drive and an overwrought and contrived climax, what Ha's latest lacks is a strong screenplay. Chronicle of a Blood Merchant is a terrific display of Korean acting talent, but it doesn't quite hold together as a film.

Chronicle of a Blood Merchant

More about Chronicle of a Blood Merchant