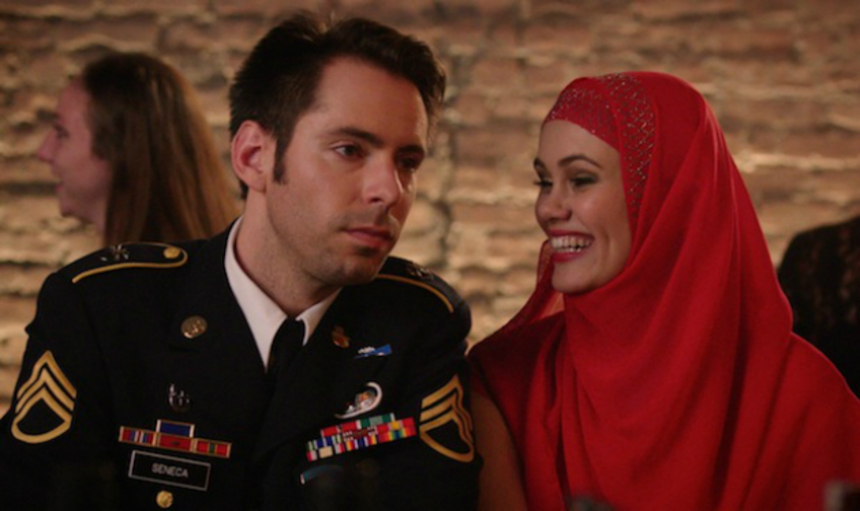 A man and a woman meet cute. Opposites attract. Hostility melts and attraction grows. New York City. While all these standard romantic-comedy elements are present in Amira and Sam, they share time and space with the specter of the war between Iraq and America, helping Sean Mullin's film to stand out as a rare example of an intelligent love story.

Sam (Martin Starr) is an American military veteran who served multiple tours of duty in the Middle East. He has returned to New York City, apparently little-changed, though it's tough to tell, given his quiet, low-key personality. Has he become more withdrawn after returning? The character's deadpan humor and restrained emotions are also part and parcel of the actor's stock in trade; where does one end and the other begin?

Starr and Mullin stitch things together in a seamless manner, resulting in a performance that centers the movie on a solid foundation while allowing room for the idea that Sam is bottling up certain emotions. Given the right conditions and pressures, will those deeper emotions come bubbling up?

Amira (Dina Shihabi) is a talkative Iraqi immigrant who is first seen hawking pirated DVDs on a Manhattan street corner, her clothing identifying her as "a foreigner" ... until it becomes apparent that she's not terribly worried if her clothing shows more skin than expected (or required by those more devout). She is sharp-tongued, aggressive, and self-assured, qualities on display when she encounters Sam on the street, as well as a short time later when Sam shows up at the apartment she shares with her uncle Bassam (Laith Nakli).

Sam and Bassam struck up an unlikely friendship in Iraq, and now that they've reunited, the older gentleman is prompted to entrust Sam with providing protective care for Amira after her legal status in the country comes into question. Sam is only too glad to help -- that's a reflection of his caring personality, not a manifestation of his libido -- and makes room in his own tiny apartment for her. 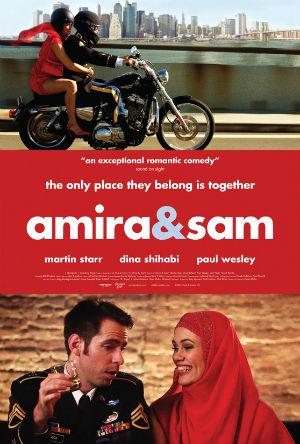 It's meant to be very temporary arrangement, just a couple of days while Bassam goes out of town to arrange for a longer-term housing solution, but spending that much concentrated time together allows both of them to see beyond outward appearances and peer into each other's souls, and romance quickly sparks.

A further twist comes courtesy of Sam's reunion with his cousin Charlie (Paul Wesley), a mid-level Wall Street executive who sees opportunity in Sam's past military service, setting him up to meet potential investor Jack (David Rasche), who is also a veteran, in the hopes that it will smooth the way to close a big business deal.

Amira and Sam consists of a series of small moments that, taken out of context, are entirely ordinary and, mostly, are not terribly dramatic. Laid out in any other order, they would have little impact. Writer/director Mullin, however, has placed each scene exactly where it needs to be, constructing a narrative that is, upon reflection, incredibly tight. Every scene leads to the next in logical order, and the film accumulates momentum and weight as it proceeds to a climax that caught me by surprise.

As Amira and Sam plays out, it feels like a lightweight, humorous, pleasant rom-com that gradually gains deeper meaning and significance. The full effect is not felt until the credits begin to roll, and continues to detonate long after the screen goes dark.

The film opens in select theaters in the U.S. via Drafthouse Films on Friday, January 30. Visit the official site for more information.

Do you feel this content is inappropriate or infringes upon your rights? Click here to report it, or see our DMCA policy.
Dina ShihabiDrafthouse FilmsMartin StarrSean Mullin

More about Amira and Sam