Destroy All Monsters: Good Enough For The Golden Globes 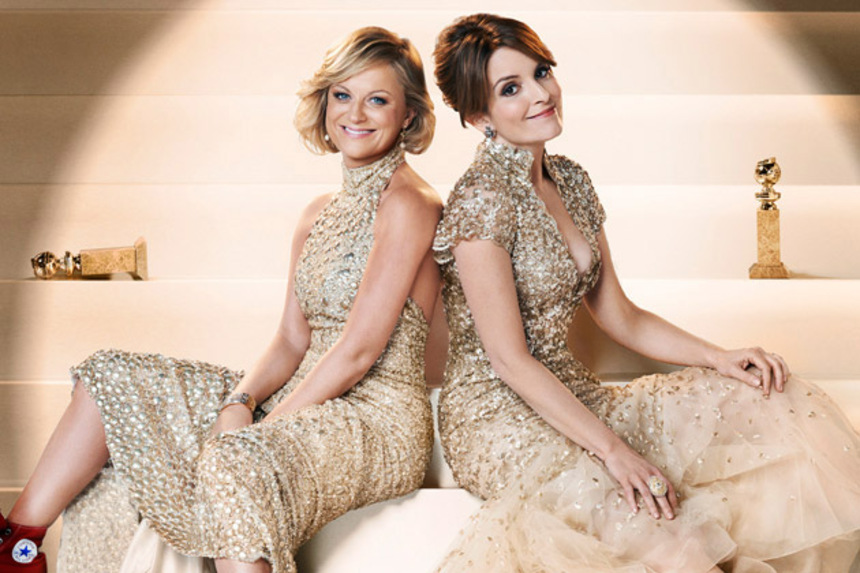 The Golden Globes are the silliest and most trivial of the trivial Hollywood accolades, a fact widely known among film fans and hopelessly lost to the masses beyond, the same masses who awarded Taken 3 a heaping $40M this past weekend and in so doing, irretrievably answered for all time the mainstay film industry question: "Why does Hollywood only do sequels and remakes and reboots?"

It boggles my mind that the GGs broke through to the mainstream in my adult lifetime. It boggles me further that what is little more than an in-industry circle-jerk - to even go so far as to call the HFPA a critics' group is an insult to both critics and groups - has become to awards season what the Santa Claus Parade is to Christmas, i.e. the unofficial/official kicking-off, the sound of the horn on the trading room floor.

Although, I suppose, part of my problem is that I'm actually interested in the Oscars as Oscars, and not just as an opportunity to hate-watch the film industry patting itself on the back in a collage of deeply gender-coded performance cycles on such varying topics as Dresses, Jokes, and Seriousness.

The Oscars are interesting because they're the film industry's major trade show, and watching that particular industry work out its own conception of merit is interesting to me.
None of their decisions have anything to do with actual merit, of course - inasmuch as "merit" is a thing that can exist, which arguably, it is not - but it's fascinating to watch the hive mind that I spend the rest of the year interacting with on a market/consumer basis lay its cards on the table in terms of what it deems worthy of its own awesomeness.

The critics' group awards that run from roughly October till now are less interesting, though not entirely devoid of usefulness. They show what the echo chamber that exists between actual film criticism and advocacy, and the industry's overwhelming hype machine, average out to.

Everyone flipped their lids when the National Society of Film Critics gave the top slot to Goodbye to Language, for example, even though this was arguably what a society of professional critics should have been doing: divesting themselves entirely of responsibility to the Theory of Everything / Imitation Game crowd, and looking at what might actually qualify as art in the realm of filmmaking for the calendar year 2014.

And everyone flipped their lids yesterday when the DGA nominations were announced, celebrating the works of five white heterosexual males, a dull reminder that a large voting group of white heterosexual males tends to be fairly unimpressive in its thinking. Arguably, they were doing what they should be doing too: closing the doors of the club. They like their club the way it is, dang it!

The GGs exist on the far side of that kind of thinking. Those clever sons of guns in the Hollywood Foreign Press Association correctly glommed to the fact that for the vast majority of people in the real world - i.e. not film critics, and not Hollywood - awards are nothing more than a geek show that can be had for the price of a television set.

As such, as long as network television still exists (it does), ad revenue can annually turn the HFPA into Hollywood superstars (and it does).

For about an hour and a half, that weird cadre of photographers and press agents have as much sway over the popular consciousness of "good" and "bad" in television and film as large voting bodies made up of credible professionals who actually make the films, and any number of ancillary bodies of people who make their livings analyzing and assessing those films.

And the weird thing is, in every way that the Golden Globes are specifically not the Oscars, they establish and uphold a magnificent two-tier system for the evaluation of creative work, not unlike the "in theatres" / "wait for home video" methodology with which we all chalk up the movies we are likely to see.

The Globes aren't the Oscars, and they don't have to be. And because of this, they can get away with daffy shit like giving away two Best Pictures (Boyhood and The Grand Budapest Hotel this year, in one of the most weirdly on-model HFPA decisions I can remember in my lifetime) or judging series television in mid-season. They're protected by the rain gutter of their own triviality: if their choices happen to presage the Oscar wins yet to come, they were lucky; if their pick misses, well, it was just the Golden Globes.

"Just the Golden Globes" is a great umbrella. It's where the wildly popular hosting jobs have come from (because under the shelter of that "just," you can get away with hiring Fey and Poehler a rough decade before anyone would have the sense to give them the Oscar job). It's why the celebs don't mind going onstage blazing drunk, or making jokes about J-Lo's boobs on live television.

With each lift in the Golden Globes' marketable popularity there seems to be a proportional increase in the entire telecast's conviction that no one is watching at all. That's worth something, isn't it? These "awards" might as well not even be called that, for all the credibility they lack; but as an opportunity for us all to mainline celebrity culture as it was never meant to be seen, the GGs are quickly becoming the only game in town.