Kwenton Bellette
Editor; Australia (@Kwenton)
Tweet Post Submit
Xmas is just around the corner, and for the discerning receiver of gifts it can be quite a burden to find your loved one that something special.
Thankfully Madman's November and December release slates are filled with a diverse selection of excellent anime, film and television - enough to satisfy anyone you deem worthy of gifting this holiday season!

For lovers of anime masterworks

Madman kicked off the classic anime canon with last years release of the 25th Anniversary edition of Akira on Blu-ray. This fantastic slipcase set features lush packaging, a DVD and Blu-ray combo, a gorgeous color production booklet and loads of exclusive extras on disc. The anime itself is one of three defining releases for a generation, the other two…

Released just last month the 25th Anniversary edition Blu-ray of Ghost In The Shell is a must-have. This perfect film encompasses most sci-fi tropes used in almost every Hollywood blockbuster today, but stays relevant thanks to its fully realized cyber-punk world. This edition has no extras, opting instead for a minimal look and phenomenal remaster. It does however include a booklet.

Last but not least, the anime that began it all, for me at least. Ninja Scroll, finally available on Blu-ray. This excellent Toho release includes directors commentary. Both audio tracks are great, but for the first time I would highly recommend the English dub, possibly for nostalgia reasons! This lovely Blu-ray also comes with a booklet.

Flippin’ mathematical! For the first time all four seasons of Pen Ward's award winning crazy Adventure Time are available in a swish DVD or blu-ray boxset!

This is 104 episodes of cartoon lunacy – the adventure will literally never stop!

For lovers of Adult Swim

Adult Swim, the risqué Cartoon Network block that has nothing for everyone has really hit the nail on the head with Rick and Morty. An extremely dark take on a Back to the Future dynamic coupled with dysfunctional family madness and sci-fi absurdity.

This violent, surreal and offensive show is one of their best, with thanks to incredible input from Dan Harmon (the creator of Community) and amazing voice work from the psycho grandpa Rick and his do-gooder grandson Morty.

This DVD set includes all of season one as well as a cute mini-comic. Each episode will get many rewatches and this shelf life doubles considering the wealth of awesome extras on the disc, including commentary, behind the scenes featurettes and animatics for every episode.

Not only that but the commentary includes guests the likes of Matt Groening, Robert Kirkman, Pen Ward and more! 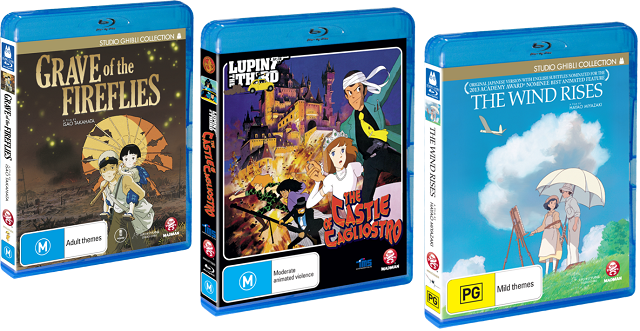 For lovers of Ghibli

Madman have pulled all the stops to make your Xmas the most Ghibli-tastic as possible, where to begin!?

Secondly, a slew of Ghibli and Miyazaki December releases sure to please any collector or lover of beautiful animation.

Releases include Miyazaki’s directorial masterwork The Castle of Cagliostro aka Lupin the Third on Blu-ray. Accompanying this is his last work, the altogether adult The Wind Rises. Lastly, get that loved one the completely devastating Grave of the Fireflies on Blu-ray and experience some Hi-Def sadness together. 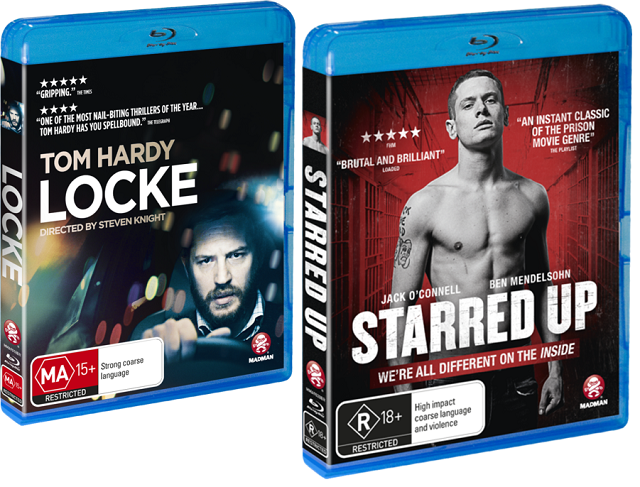 For lovers of cracking cinema

It just so happens that Madman released in the same week two of the best recent British films, both striking contrasts but equally captivating in their own right.

Both Tom Hardy vehicle Locke and Jack O’Connell’s searing prison drama Starred Up are now available on Blu-ray, providing excellent hard-hitting entertainment that is impossible to look away from.

In Locke, Ivan Locke (Hardy) has worked diligently to craft the life he has envisioned, dedicating himself to the job that he loves and the family he adores. On the eve of the biggest challenge of his career, Ivan receives a phone call that sets in motion a series of events that will unravel his family, job, and soul.

All taking place over the course of one absolutely riveting car ride, Locke is an exploration of how one decision can lead to the complete collapse of a life.

Jack O’Connell will soon be a household name, having starred in the powerful and harrowing Angelina Jolie directed Unbroken. Before you see this Oscar contender however, witness his phenomenal talent in Starred Up.

Boasting a stellar cast at the peak of their dramatic powers and written by former prison therapist Jonathan Asser, Starred Up is raw, visceral and violent: a brutally realistic and spellbinding addition to the prison movie genre.

Eric (O’Connell) is a violent young offender prematurely thrown into the dark world of an adult prison. As he struggles to assert himself against the prison officers and the other inmates, he has to confront his own father, Nev (Ben Mendelsohn); a man who has spent most of his life in jail.

Check out Jason’s review of Starred Up here.

For lovers of music

Easily the most esoteric of the bunch, this gift is sure to please fans of (good) Australian music or those after a challenging watch.

Drama and reality combine in a fictitious 24 hours in the life of musician and international cultural icon, Nick Cave. With startlingly frank insights and an intimate portrayal of the artistic process, the film examines what makes us who we are, and celebrates the transformative power of the creative spirit.

Featuring appearances by longtime Cave collaborators Ray Winstone, Blixa Bargeld, Warren Ellis and Kylie Minogue, 20 000 Days on Earth fuses drama and reality by weaving the journey of a fictional day in the life of the rock star with an intimate portrayal of his artistic process.

For lovers of gross romance

Last and certainly least, the German film adaptation Wetlands that has disturbed many a reviewer makes its way to DVD in Australia during the silly season; an hilarious release date no doubt. Perhaps you should question your loved ones tastes if they are satisfied with this under the tree?

The DVD is loaded with interviews, featurettes, a music video, audio commentary with the actress, director and producer that I would be keen to check out and finally 'Bath Day", a short film from the director.