Review: WINTER SLEEP, What Does It Mean To Be 'Good'?

Nuri Bilge Ceylan trained as a photographer and has mined the expressive terrain of his native Anatolia to great effect throughout his career.

As a director, he has used the landscape not simply as a backdrop, but often as an integral player in the fabric of his films. Which makes it all the more surprising that the vast majority of his latest work Winter Sleep, a film set in the primordial, truly awe-inspiring region of Cappadocia, is set indoors, squarely between four walls.

Well, initially surprising, anyway. As the film goes on, the director's true intentions reveal themselves. They do so leisurely, and with a measured pace; it does last almost three and a half hours, after all.

In the broadest of terms, you could call Winter Sleep a character study. The film follows Aydin, a 60ish, wealthy innkeeper and retired stage actor. Aydin is now content to spend his days writing articles for the local paper, researching the history of Turkish theatre, and hanging out with the guests staying at his hotel. Of course, the film has far loftier ambitions than simply examining and fleshing out the lead. Rather, it uses him as a way to navigate a more esoteric question. It asks, and then challenges us to answer: just what does it mean to be 'Good '? 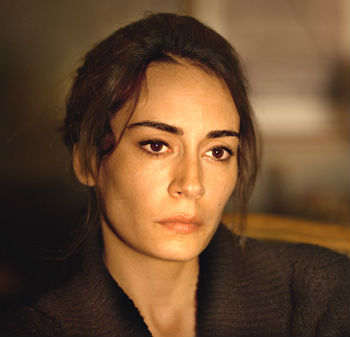 Sounds tough, right? Well, at first, Aydin seems like a perfectly reasonable person to answer. He's happily married, charitable and polite. He's good-natured, cultured and hospitable to all. He seems on his face to be the agreeable avatar of contented middle-agedom, and yet by film's end we recognize in him a malicious, almost tyrannical villainy.

We get to that point entirely through conversation. It's firelight verbosity in an expansive widescreen frame. In a film of epic length, set amidst a mythic landscape, the interactions assume a similar gravity. Mind you, they're never about matters particularly dire. Aydin the aesthete continuously berates the pulpy contrivances of paperbacks and soap operas, and the film makes a similar point in sticking with the mundane. They start as gentle teases, or as petty lover's quarrels, but in their length and rigor each one strips bare another level of his genteel façade.

The interactions all take a considerable amount of screen time, usually twenty minutes or more. Aydin is a former actor, after all, and each one, with their rhythms and reversals and climaxes, can double as a one-act play They all start similarly. We're led in by Aydin, invited to experience the moment as he does, from his view. As they go on, endlessly it often feels, the cracks in his self-awareness come clearer into view, his selfish myopia better defined.

Let's take one of the first instances as an illustrative example, then. Aydin's been driving through the mountains, when out of nowhere a young boy throws a rock through his passenger window, nearly knocking him off the road. The child is quickly apprehended and brought to father for swift punishment. Aydin is respectful the whole time, neither laying hand on the boy nor insisting the father do the same. 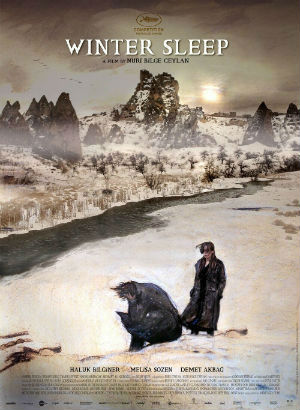 That narrative mechanism is the crux of many (looooong) interactions that ensue. Many of them are with his younger wife, for whom he takes care of every matter, not realizing that with each responsibility he removes he is robbing her of her autonomy and shattering her self worth. By taking care of the little things he is robbing her of something big.

Others are with his sister, a local teacher, a retired friend, and again with the his tenants. Each time dismantles Aydin's sense of grievance piece by piece, revealing the privilege he wields and the obtuseness with which wields it, to the point where we see him not in the victimized lens with which he sees himself, but as a kind of malignant aggressor.

The film can be easily criticized as being too talky, overlong and a tough sit. All of which is entirely true! But there is some kind of cumulative value in the stacks of minutes and words that pile up and topple onto each other, something that is also reflected in Ceylan's rather agoraphobic decision to keep things mostly indoors for the duration of the film.

Twisting the familiar, a simple interaction or the inside of a living room, into something heightened and uncanny highlights the film's final verdict on Aydin. To turn the idiom around, he is proof of the evil of banality.

Review originally published during the Cannes film festival in May 2014. The film opens in New York (at Lincoln Plaza Cinema) on Friday, Dec 19, followed by a national release in January.