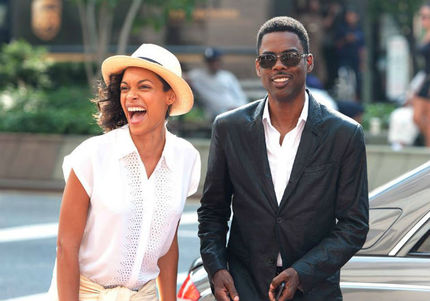 Rude, crude, and lewd as it is, Top Five is still a big step forward for Chris Rock as a filmmaker.

In essence, that's because it more closely resembles his brilliant stand-up shows, where he gets on a roll and never stops moving, darting into raw social issues and then drawing them out into extended set-pieces, filled with piercing insights. This movie feels substantially different than the broadly-aimed Head of State (2003) or the faux-sophisticated I Think I Love My Wife (2007), which drowned in earnest romance. Top Five only stumbles when it stops to make a point, or when it arcs off-course with an absurd plot twist or two.

Rock's character in the movie, Andre Allen, is a 'what if'' variation of himself: What if a drug-addicted standup comic made a trilogy of blockbuster comedies featuring a bear turned police officer -- or is it a police officer who dresses up as a bear? -- got busted, then got straight thanks to reality TV star Erica Long (Gabrielle Union)?

The story begins four years later. Andre is so indebted to Erica that he agrees to marry her for the benefit of her TV show. Meanwhile, he has sworn off comedy, and has starred in a series of dramatic movies that have not fared well. His latest, in which he stars as a Haitian slave turned freedom fighter, is about to open, and as part of his promotional duties, he agrees to be interviewed by New York Times reporter Chelsea Brown (Rosario Dawson).

The interview begins on a hostile note; Andre has been personally savaged by Times critic James Neilson on numerous occasions and is not inclined to be helpful to the reporter. But when Chelsea reveals her own past addiction, Andre warily agrees to open up, and allows her to accompany him as he goes shopping, does the media rounds, and visits his family.

The movie is a comic talk-fest, structured with an eye for variety: walking and talking on the streets of Manhattan, joking and chiding and advising with a large family in a tiny apartment, wading through media interviews in a whirlwind of cross-cutting. And, not to forget, an extended night in a hotel room with two prostitutes and an unexpected visitor. 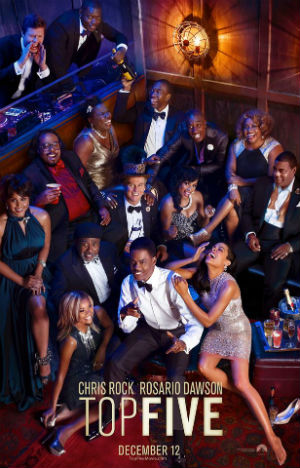 Not every comic routine scores laughs, of course -- such is the subjective nature of comedy -- but Rock is on-target far more often than not, and the movie made me laugh consistently throughout its running time. Rock is aided and abetted by the able and attractive Dawson, who can rattle off dialogue with crackle and snap, and carries the emotional weight of her character with aplomb, as well as a supporting cast that includes J.B. Smoove (as Andre's assistant and bodyguard), Kevin Hart (as Andre's agent), and Cedric the Entertainer (as a promoter). Behind the scenes, Anne McCabe keeps the pace fast and fluid as film editor, and Manual Alberto Claro crafts a grounded yet vibrant look as director of photography.

Both the strengths and the weaknesses of Top Five hinge on its insular nature. It's show biz, folks, and the people doing the show are plagued with insecurity and self-doubt; they also tend to gaze into the mirror and wonder if anyone else can see past their beauty and appreciate their genius.

Andre Allen rose from humble origins and can now afford the luxury of wondering what to do with his life. The familiarity of the premise, however, doesn't take away from the feeling that this is Chris Rock's most personal film yet. He plunges into self-examination with a brutally honest eye; he looks into the mirror and, contrary to common industry wisdom, knows his future is up to him. What will he do next? Top Five makes me want to know.

The movie opens in theaters across the U.S. and Canada on Friday, November 12. Visit the official site for more information.

Do you feel this content is inappropriate or infringes upon your rights? Click here to report it, or see our DMCA policy.
Chris RockGabrielle UnionRosario DawsonJ.B. SmooveComedyRomance