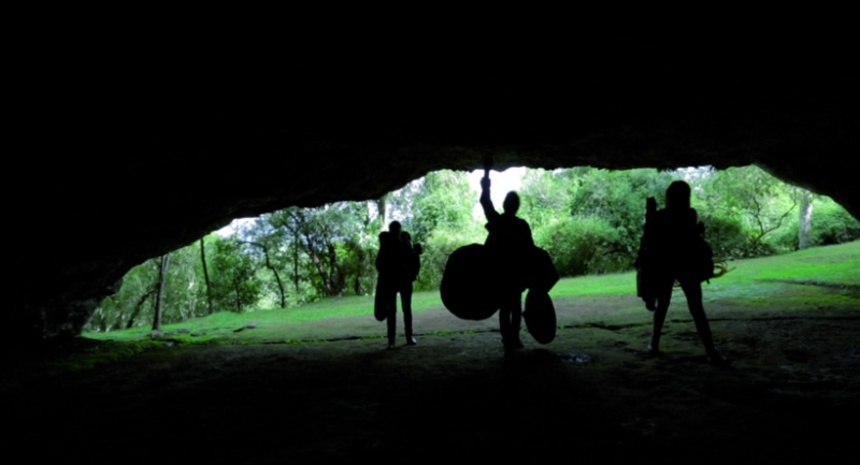 In his first feature film The Silent House, director Gustavo Hernández told a familiar haunted house story in a unfamiliar way, by shooting it in a single take. For his second feature, Local God, he again approaches a familiar story, and again tells it in a somewhat different way. What he presents is an experimental film disguised as horror. Though it stumbles in parts, Local God in an intriguing journey, both literal and psychological, of three characters who must confront their own trauma in isolation and fear.

After a difficult accident involving her son, Diana (Gabriela Freire) and fellow musicians Maite (Mariana Olivera) and Manuel (Agustín Urrutia) retreat to a remote cave to work on videos for their conceptual rock album, one that will deal with their darkest secrets and fears. But this cave seems to house an odd and possibly malevolent spirit. During the night, each of the three wanders the cave in a strange nightmare, seeing their fears presented through recreations of their homes, sounds that come from the walls, unknown and attacking animals, all the while trying to keep their sanity and make it to morning.

The first third of the film has the feeling of a docu-drama, with home video footage, CCTV and handheld cameras creating an intimacy with the characters. This intimacy is not based so much on exposition of the situation, as it is watching how the characters interact. This about how the characters will find a way to release their inner pain through music. So it has a docu-drama feel in order to give a feeling of realism, before moving into the surrealism of the later scenes.

As the characters hike to their destination of the cave, there is a sense both of loneliness, and a bit of absurdity. Any spectator with a knowledge of horror tropes will know that putting these characters in an isolated spot will lead to some scares, but Hernández keeps up the realist feel as long as possible to put a spin on this. While there is a brief mention of the cave's past, it's almost irrelevant, and perhaps it was an unnecessary plot device. Just being in an strange, lonely place in the middle of nowhere with nothing but bad memories would be enough to lead the film on its dream-like, surrealist journey.

The rest of the film is split into the three musician's nightmares: as they seem to be separated, and search for each other in the cave, they are confronted with physical manifestations of their fear, guilt and pain. There is definitely a Lynchian/INLAND EMPIRE feel to these sequences, with hallways and rooms appearing out of nowhere, muted colours, and invisible hands strangling life literally and metaphorically. These images are not even attempting to make lineal sense and yet are compelling, emphasizing the theme of miscommunication. They also serve to further the narrative, with strange moments of beauty (such as the beginning of Maite's dream and the beautiful bubbles) with the bizarre/terrifying (cars falling from the sky as symbols of guilt).

But that feeling is not sustained; there are just a few too many long takes of Diana, for example, walking through the cave, with little to see or hear, and rather than creating a fearful anticipation, it feels unnecessarily stretched out as we wait for the next confrontation or event. It just ends up feeling boring and interrupts the flow, especially once a rhythm is established, which these too-long takes tend to disrupt, making it too easy for the mind to wander. Once we have been brought into the strange universe, it is a mistake to pause or let us out of it, even for a few moments. This was not dissimilar to moments in The Silent House, so while this might be a signature move that Hernández is trying to establish, it doesn't work.

What does work are the juxtapositions of surrealist imagery within the horror setting of kids-in-the-woods, separated and lost. But instead of being punished for misdeeds; well, perhaps one of them is, but this is more about punishing themselves, or at least, walking around the prison of their own minds. But then, the film seems to be expressing the sometimes tortuous nature of the creative process. One that is surreal and strange, frightening and traumatic, and that can lead to release and relief, but also confrontation and madness.