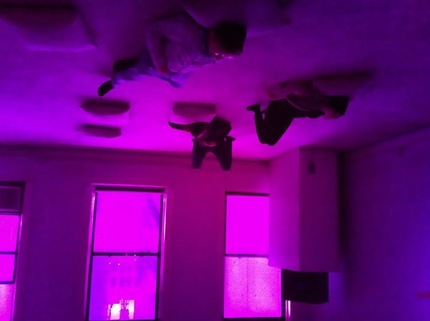 It's not everyday you get a group of up and coming American directors pooling their colleague's/ collaborator's dreams for their next creative endeavor, but that's exactly what collective:unconscious is.

What's to get excited about here is two-fold: Project producer Dan Schoenbrun describes the process as this:

First, each filmmaker will write a brief recollection describing a dream they've had. These statements can be as straightforward or as myopic as each filmmaker chooses.

Next, I'll shuffle the deck and assign each filmmaker someone else's dream to adapt.

Each filmmaker will have complete creative control over their adaptation. What they create can be anything. A straightforward read of the dream or a radical reinterpretation. Thirty seconds long or thirty minutes long. Any genre or format -- horror, animation, a musical, even a documentary.

Straight forward with a rainbow of possibilities. Nifty that.

The other side of it is the crackling talent involved. We have Josephine Decker (Thou Wast Mild and Lovely), Frances Bodomo (Afronauts), Lauren Wolkstein (Social Butterfly), Daniel Patrick Carbone (Hide Your Smiling Faces), and Lily Baldwin (Sleepover LA). It's an eclectic bunch of filmmakers that all feel united on their bold visions and tones. If experimental and narrative can find a home together in the independent American front again, well, a few of the folks in this gaggle, at the least, are sure to do it. Hype aside, allowing them to stretch their muscles and play on a project like this can be essential to future collaborations and projects.

collective:unconcious is over on Kickstarter and has reached their base goal with a few more days to hit their stretch goal of $25,000. Put on your PJs, leave a few real bucks handy, and give it a looksie.

Do you feel this content is inappropriate or infringes upon your rights? Click here to report it, or see our DMCA policy.
afronautscrowdfunddaniel patrick carboneFrances Bodomohide your smiling facesindie filmjosephine deckerkickstarterthou wast mild and lovely