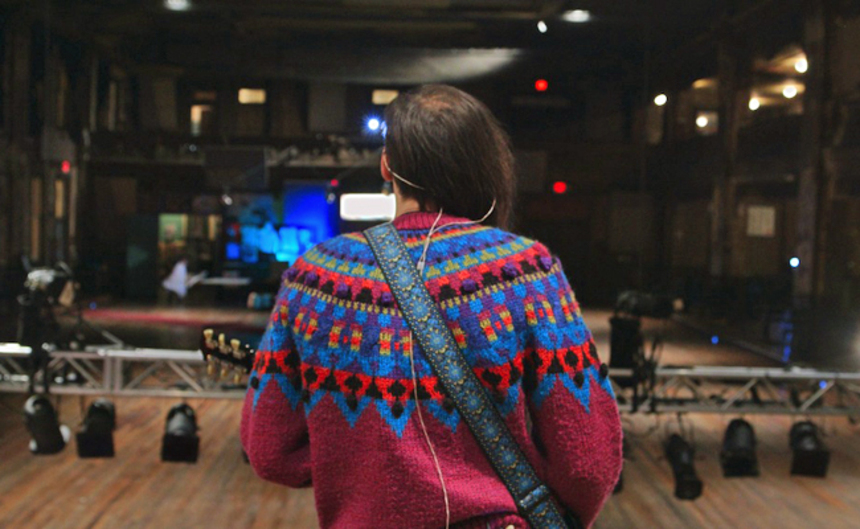 The No Budget Film Festival will kick off its 5th annual event on LA's east side November 21 and the good folks at cARTel have just announced this year's lineup. Aside from a packed program of short films (listed below), the fest will feature a host if interesting workshops and chats from insiders in the indie film community.

The festival opens with a gala presentation of Jason Miller's Of Montreal documentary The Past is a Grotesque Animal. The film was released by Oscilloscope this summer.

The full list of films and workshops follows. Let us know if you'll be checking out the fest.

11 Minutes / California, U.S.A.(Director: Tom Botchii) A shooter goes on a rampage, but is it real or just in his head?

Adoxography / Ohio, U.S.A. (Director and screenwriter: Cameron Granger) A long overdue letter to the past.

Don't Worry, I'll Do It/ California, U.S.A. (Animator: Jordan Wang) A journey at night contemplating the fragility of the relations with people closest to us.

Eye in Tuna Care / New York, U.S.A. (Director and screenwriter: John Walter Lustig) A dentist's expertise is put to the test when an unusual patient seeks his help.

LITE FEET / New York, U.S.A. (Director: Ruben XYZ) Lite Feet is a dance movement started in the Bronx, these are the kids moving it forward.

This Is Not The End / California, U.S.A. (Director: Hilary Campbell) A young woman documents the recent history of her family through handmade signs. The more signs we see, the more secrets are revealed. This is a documentary that plays like a personal essay, a wholly original and deeply felt take on the form.

Woman Who Hates Plants / New York, U.S.A. (Animator and screenwriter: Morgan Miller) She does like her cigarettes.

205: The Ground Unfolds / Switzerland (Director: Julie De Wispelaere) Armed with shovels, three men roam far and wide in the plains while uttering enigmatic formulas. They venture relentlessly into a surrealistic quest. Step after step, they turn into an endless road, outside of time and space.

Countryphile / U.K. (Director and screenwriter: Ruth Sewell) A country and western singing gynaecologist gets considerably more than he bargained for when a cute patient visits his surgery.

Haunted Hospital / U.K. (Director: Molly Brown) In 1962, the patients at a psychiatric hospital tell their stories to a young couple, but what REALLY happened at the hospital before this young couple's arrival?

Hushed. Left. Jumped. / Portugal (Director: Bruno Carnide) A man speaks to the onlookers intimate moments of his life, which will eventually unveil his true essence. Faced with this reality, he decides to make a decision.

Land's Waiting / Iran (Director: Mohammad Talebi) A documentary about death, focusing on the process of making gravestones in Iran.

Mirror in Mind / South Korea (Animator and screenwriter: SeungHee Kim) A woman looks into her mind and sees that every imperfect piece of her mind completes herself.

Poop On Poverty / Denmark/South Africa (Director and screenwriter: Vijay S. Jodha ) Set on the edge of the Thar Desert and in the middle of world's biggest camel fair, this film looks at the underbelly of one of the most visited and photographed tourist destinations in the world.

Richie / U.K. (Director: Andy Salamonczyk) Three builders find out something about each other whilst taking a tea break from their work.

STICK / U.K. (Director and screenwriter: Marina Moya) A girl visits her friend to talk about a dream in an ambiguous situation.

The Secret World of Tim / New Zealand (Director: Hayley Sheppard) A previously hidden world is uncovered through the examination of the processes that goes into the creation of a circuit board.

Why I Went Back Inside - Free As A (Jail)Bird / U.K. (Animator and screenwriter: Alan Harding) An ex-con is released back into our lovely, toyota-driving society, and attempts to spend his long, lonely free hours gardening and resisting the seductive urge to systematically slaughter everyone in sight and steal their patio chairs.

李教授（Professor Lee) / Taiwan (Director: Reider Larsen) While studying primates Professor Lee makes a discovery about his own humanity that will change his life forever. Inspired by the film "Lucky People Center International" (1998)

Bernard the Great / Canada (Directors and screenwriters: Philippe Lupien & Marie-Hélène Viens) Today Bernard proudly wears his anti-growing suit, ready to face the world. Today is Bernard's birthday, and he has no intention of turning 10.

Chakshoo / India and California, U.S.A (Director and screenwriter: Ankush Jindal) Young Pooja goes to great lengths to show her friend Chakshoo an indentured servant, a beautiful life, if only for just one day.

Dinosaurus / California, U.S.A (Director: Matthew Kaundart) Have you ever seen that guy wandering around Los Angeles wearing a dinosaur suit? This is his story.

everything & everything & everything /California, U.S.A. (Director and screenwriter: Alberto Roldan) The oppressively vapid life of Morgan is forever transformed when a mystical blue pyramid - that inexplicably produces doorknobs - appears in his apartment. What follows is a tale of greed and loss as Morgan builds an impossible, absurd corporate empire of doorknobs.

Finding June /California, U.S.A. (Director and screenwriter: Anna Schumacher) Through the eyes of a Deaf woman just diagnosed with breast cancer, we explore communication's role in truly understanding one another.

Lady and the Bum/ California, U.S.A (Director: Blake Hodges) After Molly discovers a terrible secret about her husband, a local homeless man takes her on a whimsical journey and helps her rediscover her independence.

Lay in Wait / California, U.S.A. (Director and screenwriter: Jonathan Ade) A young married woman in the midst of an affair loses her wedding ring in the woods and must find it before the sun sets.

LEVON: A Wondrous Life/ Armenia (Directors: Anahid Yahjian and Emily Mkrtichian) Levon is a 60-year-old Armenian rollerblader who, despite his post-Soviet country's struggles, refuses to lose his enduring belief in and contentment with the simple magic of being alive.

Newborns/ India (Director: Megha Ramaswamy) Newborns attempts to provide a lens to the survivors of acid violence, to look forward and gaze back. They take us through the ennui of their domestic and public spaces in a nameless dystopian city, its factories, houses and motels, and its promises, never honoured.
Workshop: Your Story in 4D with DAQRI

You don't have to be Tom Cruise in Minority Report to enjoy interfaces that come to life with the wave of a hand. Straight out of science fiction, augmented reality is a robust interactive virtual experience you can use today.

DAQRI, the leading augmented reality software company, will present a hands on training for their software suite and collaborate with NBFF filmmakers to augment their film posters and bring them to life. Posters will be displayed in the lobby of Mack Sennett for the duration of the festival.

Join No Budget Film Fest for a hands on workshop with Digital Bolex. You'll be working directly with this innovative, crowdfunded camera that's already been used by Spike Lee, Ondi Timoner, and major TV shows, instructed by filmmaker and camera co-developer Elle Schneider.

MacGyver your movie with a paperclip, a fishbowl, and a lighter, (okay and maybe a few other things.) The gangs from 5-Second Films and RocketJump Film School (Video Game High School) team up to teach you how to make awesomesauce movies using only the tools at your disposal. With exclusive-never-before-seen footage and live demos the 5-Second Films and RocketJump teams will show you the tricks and tips of "Available Filmmaking" and how to make those special effects without blowing your budget.

Workshop: So You've Decided to Be An Indie Film Producer

Trust them, they've been there. Get the producing lowdown from our panel of experts. Producers Jordana Mollick (Life Partners), Effie Brown (Dear White People) & line producer, M. Elizabeth Hughes (Short Term 12, Husbands) answer all of your nitty gritty producing questions about where to cut your budget, where to stretch it, and where to shut up and pay for something already. So if you spend nights losing sleep about whether you need a permit or how to get through all of that SAGIndie paperwork, come prepared to ask anything you've ever wanted and let this powerhouse trio steer you in the right direction, (and leave with a list of recommended local vendors for your next shoot, to boot!)

Every year a list of the best unproduced scripts, voted on by an industry's worth of tastemakers, is released to the public. Since its inception in 2005, The Black List is easily the most surefire and reputable way to discover new writers. Join writers whose success on the Black List has translated into real life progress in their career as they talk about the process, inspirations and what pushed them from writing in a vacuum to pursuing the next phase of their careers.

Co-Founder Franklin Leonard will be on hand with 2013 Black List writers Meghan Oppenheimer, Geoff Tock, and Stephany Folsom to discuss the list's role in their journeys. From being staffed on TV shows, to getting an agent, to being hired by studios, to having their scripts read aloud in Black List Live by the likes of Nathan Fillion, Alison Brie, Clark Gregg and more, to the holy grail of Black List-dom: getting your unproduced script produced, get the complete low down from the people who know it best.

How the hub for music videos going off tv and online has changed the format into the most boundary pushing artistic medium.

When our tried and true music video channels became gathering grounds for reality TV shows, the internet opened its doors. As a result, the industry evolved in more than one way. Join moderator Sami Kriegstein, and directors Claire Vogel, Mister Whitmore, Greg Jardin, and Isaac Ravishankara as they discuss their work, the artistic change in content, form, and the ever evolving possibilities this new platform offers.

Taking you on a journey to Buzzfeed and back again, meet creators who have taken everything from relatives to relationships and catapulted them from their computer screen to the big screen and more. Join Jimmy Wong (RocketJump) as he hosts this very real Fireside Chat with members of Kids Table Comedy, writer Emma Koenig, actress and filmmaker Samantha Futerman (Twinsters), and Buzzfeed's Weird Couple Justin Abarca and Elizabeth Triplett. Together we'll find out what's fair game when creating art based so closely on your real life, is there a difference between the 'characters' of themselves they play and their real lives, and how creating this way is conducive to no budget filmmaking as well as how taking your real life to the world wide web has led these creators into new worlds in the entertainment industry.

A very special night of UCB's Shitty Jobs delves into all things indie just for No Budget. An improvised show inspired by one of our audience member's craziest industry gigs, we are excited to welcome back NBFF's first juror ever, DC Pierson, along with fellow Shitty Jobs members Ben Rodgers and Dominic Dierkes.

How it works: The guys will interview a random audience member about their biggest set diva, pitch sessions from hell, or weird and wonderful experience in between to spin into a fully improvised show filled with Overbearing AD's, suspicious sound guys, and aloof actors, (all in good fun of course). Join us to celebrate everything that we love about guerrilla filmmaking by celebrating all that can go horribly wrong.

Do you feel this content is inappropriate or infringes upon your rights? Click here to report it, or see our DMCA policy.
Festival LineupsFilm FestivalsLos Angeles