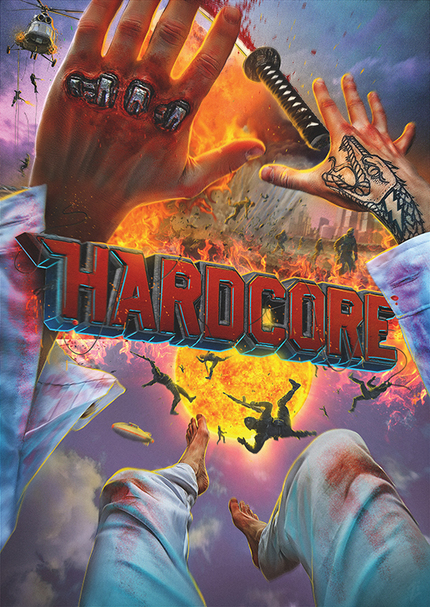 Oh, my. It's kind of amazing that nobody died in the making of Ilya Naishuller's Hardcore given the sort of risks that were clearly taken while making it and action fans should be very, very glad that they took those risks.

While you probably don't remember Naishuller's name there's a fighting chance that you know his work, his two previous short film / music videos - Bad Motherfucker and The Stampede (aka Office Escape) - having racked up millions of views on YouTube thanks to their absolutely gonzo approach to first person perspective filmmaking and a seeming total disregard for personal safety. Well, those videos made a fan of Wanted director Timur Bekmambetov who encouraged Naishuller to make a feature in the same style. And he has. Or at least mostly.

Titled Hardcore, the film is now shot and Naishuller is raising funds on Indiegogo to get it through post production.

HARDCORE is a modern, action Sci-Fi story about HENRY, a newly resurrected cyborg who must save his wife/creator ESTELLE (Haley Bennet) from the clutches of a psychotic tyrant with telekinetic powers, AKAN (Danila Kozlovsky), and his army of mercenaries.  Fighting alongside Henry is JIMMY (Sharlto Copley), who is Henry's only hope to make it through the day. Hardcore takes place over the course of one day, in Moscow, Russia and it's all shot in the same style as BAD MOTHERFUCKER to be released in cinemas worldwide.

You want a taste of what Naishuller can do? Check out the pitch videos below and click here to support the campaign. I already have.

Do you feel this content is inappropriate or infringes upon your rights? Click here to report it, or see our DMCA policy.
actionbad motherfuckerhardcoreilya naishullerindiegogooffice escapepov