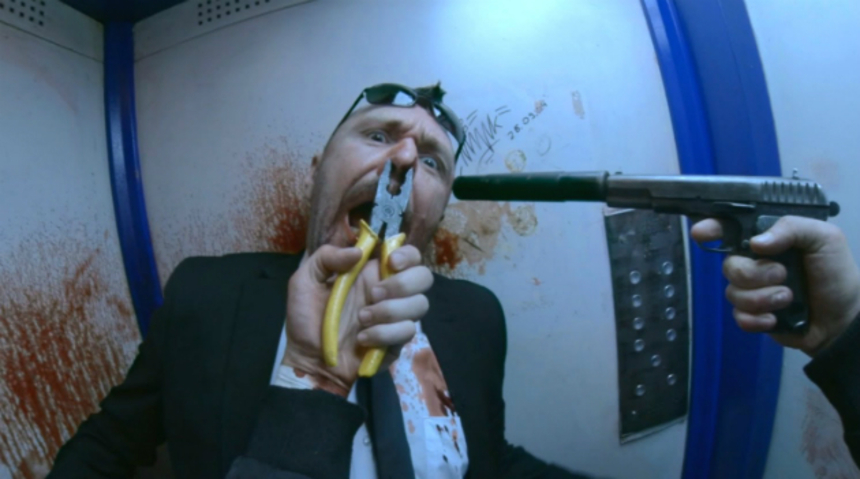 In some number of years from now when Virtual Reality is finally really here and we're all immersed in first person narratives, we'll look back at Ilya Naishuller's Hardcore Henry and ask, "Were we all really so impressed by this film?" Yes. Yes we were. Hardcore Henry is the first feature film to fully realize the first person "shooter" perspective. And while we are all plenty familiar with it from video games, on the silver screen, this is ridiculously impressive.

While the narrative style is important, the story is less so. The plot revolves around the fact that you are an amnesiac cyborg. There's a telekinetic bad guy after you. Different people show up to guide you along in typical video game fashion. Most notable is Sharlto Copley who keeps appearing as a variety of clones... Or something. It doesn't really matter. Hardcore Henry is far from the heights of narrative art. It's not trying to be.

What Hardcore Henry is trying to be is a nonstop thrill ride. At this, it succeeds wildly. Whether it's hand to hand combat or guns-blazing shoot outs, the visceral element is undeniable. The most impressive sequences are the more kinetic ones. Parkour moves up the side of a building or falling from a helicopter feel amazing. It points to how incredible these things will be once we can strap on a helmet. But even pre-VR, the feel-it factor is there and the film has multiple stomach dropping moments straight out of a roller coaster ride.

Naishuller's great success in Hardcore Henry is his continuing ability to up the ante. The fights get longer, the enemies more numerous, and the stunts more impressive. Any fear that he might not be able to replicate the action from his impressive Bad Motherfucker proof-of-concept short are quickly assuaged. But it is no doubt relentless and there are only a few places to breathe during what is quite possibly the most violent film of all time.

This isn't to say there aren't places to improve. In some ways, Hardcore Harry is a proof-of-concept on its own. Most notably, the CGI isn't up to the standards of bigger budgeted action movies and the time jumps can be a bit jarring at times. But if the main question is, will audiences enjoy a first-person action feature, the answer seems to be an emphatic yes.

We are accustomed to the tropes of the first-person video game and they are obviously borrowed from heavily in Hardcore Henry. This likely accounts for the film's generally light feeling story, as most video games have many hours to let their narratives expand. The non-speaking protagonist has been tuned to this format and will just take a little tweaking to get to a fully developed "good story." Regardless, Hardcore Henry does many things right and is an all-out joy to watch. This feels like the beginning of an incredible new genre of experiential cinema. Hold on tight.

Review originally published during the Toronto International Film Festival in September 2015, when the film was titled Hardcore. It opens in theaters throughout the U.S. on Friday, April 8.

Do you feel this content is inappropriate or infringes upon your rights? Click here to report it, or see our DMCA policy.
Haley BennettIlya NaishullerSharlto Copley