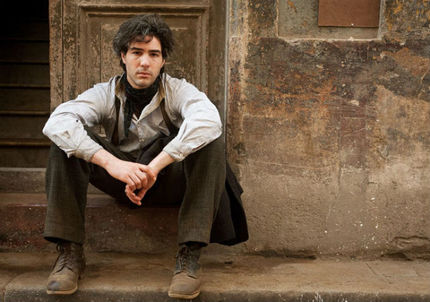 With the exception of Atom Egoyan's Ararat, the Armenian Genocide has not had much attention in Western cinema.

German-Turkish filmmaker Fatih Akin, whose previous films have often looked at issues of the marginalized, transnational cultures and violence, attempts to tackle this huge and difficult subject with his sweeping epic The Cut. A fictionalized story of one man's journey of war, slavery, and an epic journey to find his family, it is perhaps too long and somewhat predictable in its narrative unfolding, but nonetheless is effective in its portrayal not only of the genocide, but also the harrowing effects of trauma, and is beautifully photographed and scored.

Nazaret (Tahar Rahim) is an Armenian living in southeastern Turkey as a skilled metalsmith. His happy life with his wife and twin daughters is disrupted when, under orders of the Ottoman empire, he and other 'foreigners' are conscripted by force into the army during World War I. These slaves are forced to build roads in the desert for nearly three years. At the end, they are told they must convert to Islam to be free.

Many, including Nazaret, refuse, but are abandoned by their captors. They then have the bad luck of encountering a group of thieves, who kill all but Nazaret; a cut to the throat renders him speechless. The rest of the film shows Nazaret struggling to regain his life and, with little hope, find his lost daughters.

The genocide, war, and its early aftermath cover about the first half of the film, and Akin does not shy away from portraying its horror. The rocky, dry terrain where Nazaret and the others work for years breaking rocks, reflects the desolation of the situation.

All colour is washed away, and even when Nazaret feels the pull of humanity, he cannot act; in an early scene, a group of refugees walks along the road (to who knows where); a group of men ride up behind them, grab one of the women and rape her by the side of the road. I give credit to Akin for showing only what was necessary, and instead letting the woman's screams give full effect, as Nazaret is powerless to help her (another scene later in the film also has Nazaret unable to help a woman, though in that case it might be more of a choice on his part, rather than lose the opportunity for information on his family).

In another scene, after his escape, Nazaret comes across a refugee camp. But Akin and his production designer make sure the audience realize the full impactful horror of this: filled with dead and dying women and children, with grey skin and skeletally thin faces, tents full of holes, in many ways this scene is far more impactful than any sown previous, as to the real damages of war and genocide.

At this point, Akin cleverly switches to a more humourous tone, without being disrespectful to past events; at this point, some good jokes were badly needed, and this is carried well by supporting actors Simon Abkarian as a fellow Armenian refugee, and Makram Khoury as a kindly Arab businessman who takes them in. In a nice tribute to the power of cinema, Nazaret finds himself at an outdoor screening of Charlie Chaplin's The Kid, in which he finds his (silent) laugh, and tears, as this will set him on his journey to find his children.

The second half of the film is the more geographically sweeping of Nazaret's journey, and basically ends up just marking time until the (seemingly likely) conclusion of reunification with his daughters. It gets to the point where, when Nazaret finds himself in one more place only to discover that his children aren't there, you almost wish he would just give up so the film could end.

This, and one other problem hindered the film. Instead of speaking Armenian, the rather odd choice was made to have the Armenian characters speak in English. All other languages, such as Turkish, Arabic and Spanish, are spoken as such for the characters, but the substitution of English for Armenian is baffling.

For one, once Nazaret gets to the US, it's just too strange that suddenly the language is foreign to him (of course, the audience understands the substitution at a basic level, but it still is just strange). And also, it seems a bit insulting not to have the characters speak the language of the people being represented, especially considering the event. Perhaps this move was to gain more Western audience favour, and due to the international co-production funds, and/or the international cast (Rahim is French-Algerian, for example, though Abkarian is French-Armenian), but I found it detrimental to the film.

Overall, I enjoyed The Cut, and it is good to have a film that looks more directly at the Armenian Genocide, as well as have it represent this particular type of horror of war and trauma. Nazaret's inability to speak is perhaps a bit too much of an on-the-nose metaphor for those who were silenced for so long (and those who refuse to hear), and it takes to long to where the audience knows it will arrive eventually, but this is in the nature of this type of grand, sentimental epic, European or Hollywood.

Do you feel this content is inappropriate or infringes upon your rights? Click here to report it, or see our DMCA policy.
Cairo 2014Fatih AkinThe Cut