Cairo 2014 Review: THE BOY AND THE WORLD, Wonderous Animation and Storytelling 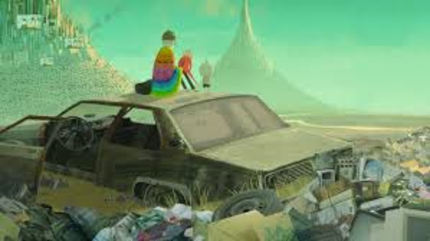 Within the first few frames, it's easy to see why The Boy and The World won both Best Feature and the audience award at Annecy International Animated Film Festival, considered to be the most important of its kind. This is a film of beauty, wonder, sadness, pain and joy, a yound boy's adventure and search for his father in a world changing not necessarily for the better. It's also a commentary on exploitation of workers, enviromental destruction and capitalist fervour. It is very reflective of its Brazlinian origins, and yet (and I often hesitate to use this word, but in this case it is true) universal in its themes and message.

In an unnamed country, a young boy lives in the countryside with his mother and father; his is a world of imagination and family love. But poverty forces his father to leave in search of work. When the boy decides to follow him, he is transported to different landscapes, some exagerrated realities, others seemingly of some predicted and difficult future. He is helped by different people, who might be reflections of his future self, trying to survive in this harsh world while still maintaining personal dignity.I know that's not much of a plot description, but this movie really has to be seen. There is little dialogue (when there is, it is backwards-spoken Portugeuse, reflecting the boy's lack of understanding, and is unnecessary to translate). And while the story is viewed through a child's eyes and imagination, it isn't a children's film per se; not that children couldn't enjoy the lively colours and fantastic score, but it is as much as movie for adults, particularly given its difficult and often dark themes of industrialization, marginalization, and environmental destruction. In fact, these themes become more engaging and poignant when seen through the boy's eyes, as we can see this as his future: a city with endless steps to a tiny apartment with nothing but canned food to eat; a mind-numbing factory job where automation could mean layoffs at any moment; fields of green replaced by fields of garbage. The film is not without hope, especially at the end, but it takes this kind of rendering to bring into focos issues that we too often ignore, especially when they happen in countries far away from the homes of first world citizens who want cheap and easy goods without a thought to how they can be made so cheaply.

I wish I knew more about animation techniques to use the proper terminology, but I will have to make due with description. Which is both difficult and not, as this is such as rich film, with many styles and techniques. From watercolour to pencil drawing to mosaic, director Ale Abreu and his team (and this was a team effort) employ several techniques to convey the story. As the film begins when the boy is happy, the colours are rich and varied, bright in the Brazilian imagination, with strange creatures, water flowing in the blink of an eye, always with a path to cross or tree to climb. These tone will repeat during times of happiness: more colour, more rounded objects, more curvature and a sense of continuity between people and the world around them, a kind of primitivism that is reminiascent of Spanish artist Joan Miro. The dark places and times are, well, darker of course in colour, with harsher lines and a futurism that speaks more to computer animation than anything hand-drawn. Again, this reflects the strong socio-political commentary of the underlying themes.

The music score is equal to the animation; indeed, the two were developed at the same time, allowing a sharing of ideas so that one fed off the other. Like the animation, it takes its cues from the story, beginning with simple folk music of flute and drums, then moving towards great caucophony and discord in the more difficult scenes. In stepping in to the place of dialogue and narration, the music reflects and interprets the story beautifully.

While a strong commentary of unhindered capitalism and its effect on poorer countries and people, the film, even in its most bleak moments, find a ray of light in the boy, who remains, as a child, optimistic and full of joy. It is perhaps the only way such difficult material can be explored and have an effect, if we see it through the eyes of someone who will have to try to make his way in this world. As I said, this is not a children's film, and I would even hesitate to label it a family film, given what that connotation can mean for audiences. But given its lack of dialogue or specific setting, it is a film that can be enjoyed by any age, and understood by those who have the power to make positive changes. But above all, it is one of the best animated films, or indeed films, I've seen this year. While it tugs at the heartstrings, it more than earns that effect; its images may be from the imagination, but its motifs and ideas are fully real, and it is perhaps only through imaginative interpretation that we can look these problems in the eye, acknowlege and accept our complicity in them, and try to fight for change.

Do you feel this content is inappropriate or infringes upon your rights? Click here to report it, or see our DMCA policy.
Cairo 2014The Boy and the World

More about The Boy and The World