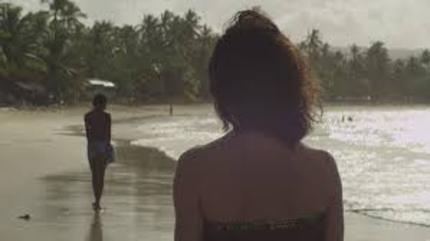 Most people would probably like to think that, when it comes to love, we get wiser as we get older, more able to tell who truly loves us and who is using us. But sometimes that chemical reaction takes over, and we can all be blind, whether we're 18 or 80. Directing-writing team Israel Cárdenas and Laura Amelia Guzmán's Sand Dollars explores love in the young and old, jealousy, sex and the rationale for lies in a minimalist and yet intense film.

Noelí, a young Dominican woman, dates older visitors to the island and scams them out of expensive goods, which she shares with her boyfriend. She has been having an affair with Anna, a much older French woman, for three years. Anna is in love with Noelí, and keeps giving her money. When Noelí becomes pregnant, Anna insists that they move to Paris and raise the child together.

In form and tone, Guzmán and Cárdenas take a naturalist and slight cinema verite approach: the scenes are presented with actors almost always in medium or close shots, with the beautiful landscape a poignant though not overwhelming backdrop. That is to say, the Dominican Republic location is important, in that it stresses the poverty of Noelí's situation and Anna's privileged position, but never takes central position over the characters. The delivery of the dialogue is interesting, in that is has a natural feel in its delivery, but also a certain formality, especially for those characters who are speaking in their non-native language. This adds to the condition of the outsider, who, while choosing words carefully, still has power through their moneyed state.

This is about people in love, how far we will go for love, and how blind love can make us, no matter what our age. Noelí loves her boyfriend, even though the audience (and likely she) are aware of how badly he treats her. While it is not suggested that she is forced into her conning relationships with Anna and other older people, it becomes clear that she is no longer happy with it, especially as Anna, rather than her boyfriend, is far more willing to assist her in her hour of need. Anna, as an older woman, like many of her age male or female, is swept away by her emotions, more forceful when she is in a location in which she has no responsibility and all the time in the world to love.

There is more than a hit of postcolonial politics here as well. Anna is not just wealthy (or at least, of independent means enough to live in the Dominican Republic for three years), but European. Noelí is poor, with few skills to get a decent job, even if such jobs were readily available. On the one hand, Anna has the power of position; but then, Noelí has no problem exploiting that power for her own gain, even if she does have some affection for Anna. It could be argued that they are using each other, and Guzmán and Cárdenas do not force them into hero and villain positions. Rather, they are presented as vulnerable in different ways, subjected to their own forceful passions and willing to do what they have to, to get what they need.

As Anna, Geraldine Chaplin gives one of her finest performances in years. I had no trouble believing in her almost obsessive love for Noelí, or the fact that, even though on some level she knows she's being conned, she is willing to except that on the faintest hope that Noelí might return her affection. On the one hand, you want to smack her for being so ignorant; on the other, I doubt anyone in the audience has not been in that same situation, loving someone who is not worthy yet whom we would do anything for.

With a wonderful score of local music and a minimalist approach that strips away all pretense, Sand Dollars is a moving and affective film. Love might make us blind and willfully ignorant, but that rush of feeling, like the rush of waves that Anna plunges into, are too much to resist.