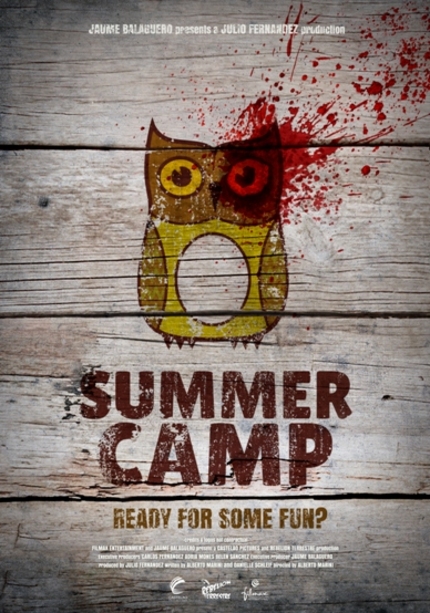 It was in the midst of his run behind the scenes of one of the largest and most successful horror franchises in recent history that [REC] director Jaume Balaguero opted to step away temporarily from the first person zombie mayhem and instead put his attention into a tightly wound little thriller titled Sleep Tight. And while Sleep Tight may not have been the populist barnstormer that [REC] was it proved to be one of Balaguero's most critically acclaimed pictures thanks in large part to the fantastic script by Alberto Marini. And now Marini steps into the director's chair for the first time with Summer Camp.

When Darren, Michelle, Will and Christy signed up to work as camp counselors, they had visions of a fun-filled summer in an exciting foreign country. During their last hours of "freedom" before the camp opens its doors, the young counselors are determined to have a night they'll never forget -and they won't be disappointed...


Before the party's even gotten underway, things get ugly, very ugly... A silent infection spreads, a friend snaps without prior notice. A savage game of cat and mouse ensues, it's unclear who is afflicted and who is not, and the pursuer can become the pursued in the blink of an eye.

The first teaser for this one has arrived online and it looks like a bloody good time. Pinata, indeed. Take a look below.

Do you feel this content is inappropriate or infringes upon your rights? Click here to report it, or see our DMCA policy.
alberto marinijaume balagueromientras duermassleep tightsummer camptrailer