Vancouver 2014 Review: WELCOME TO ME Stokes The Fires Of Disability Discourse 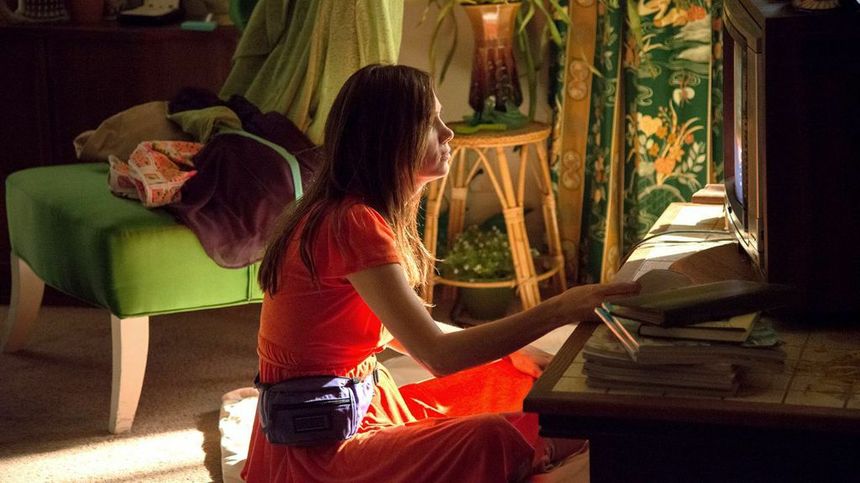 Kristen Wiig has been enjoying a lengthy run of success since leaving Saturday Night Live in 2012. Her humor is punctuated by awkward, uncomfortable stares, or lines delivered with more weight -- loneliness, sadness, regret -- than they seem to require. Thus, Wiig is right at home playing Alice Kleig, a woman with borderline personality disorder and delusions of grandeur, in Welcome to Me.

Alice lives in a dingy Palm Springs, CA home that is appropriately decorated with all the hallmarks of an occupant with a severe mental disability: color-coded shelves, rows upon rows of VHS tapes with TV shows recorded onto them, and an overzealous collection of animal nick-knacks (in her case, swans). A voicemail from her psychiatrist (Tim Robbins, one of many famous faces who show up to orbit around Wiig) informs us that Alice has gone off her meds. Shortly after this, she wins the lottery to the tune of some $86 million. Uh oh.

What Alice decides to do with her new found riches is self-fund a two-hour Oprah-inspired program about her, starring her, and featuring her in almost every way, called "Welcome to Me." The show is produced by and airs on an infomercial network who, struggling for cash and relevance, agrees to accept Alice's money and succumb to her every creative whim. While Alice's instability is apparent from moment one, the execs (James Marsden, Wes Bentley, Jennifer Jason Leigh and Joan Cusack) can't turn down her offer, seeing it as a last-ditch stab at relevance. As Marsden's character optimistically shrugs, "it'll be fun!"

Both the fictional show and the movie itself are fun, at first. "Welcome to Me," the show, is like a strange and extended version of those lotto commercials that depict a person's lavish, outlandish dream of how they'd splurge -- think a swimming pool of Jimmy Choo shoes, or having a pizza delivered to you in the Eiffel Tower. Alice's fantasy, though, ends up messy and weird when a bunch of befuddled, boring sane people try to recreate it.

At one point she asks, "why does it look so inexpensive?" before whipping out her checkbook to increase the show's budget. But, looking cheap is the least of her worries when harmlessly abnormal (making a meatloaf cake with mashed potato icing and proceeding to eat an entire piece of it in real time) becomes disturbingly reckless (burning her chest in a slow-cooker accident, or neutering a slew of dogs on the air).

Alice marches steadily toward an unavoidable breakdown, despite desperate pleas from her saintly best friend (Linda Cardellini), family (Alan Tudyk is her gay ex-husband), and producers. Director Shira Piven maximizes viewer discomfort by having the comedy bleed so seamlessly into trauma that it's hard to know when the laughing should stop. Wiig's performance, too, rests on that uneasy edge the entire time, creating a pulsating pattern of laugh-silence-laugh-gasp amongst the audience. By the end of the film, I wasn't quite ready for the upswing of a happy ending, because I had just begun to adjust to the pathos.

While it isn't perfect, and is in many ways derivative of mental illness tropes, Welcome to Me still manages to stoke the fires of disability discourse. Particularly, it successfully satirizes show business' sick love affair with the unstable. Whether the individual is unhinged because of drugs or alcohol (Charlie Sheen, Anna Nicole Smith), or is legitimately mentally ill, reality show producers throw money at them so we can giddily watch them fuck up. Piven and Wiig capture this sense well, making the audience complicit as we enjoy Alice's ride, just waiting for its inevitable crash.

More about Welcome to Me