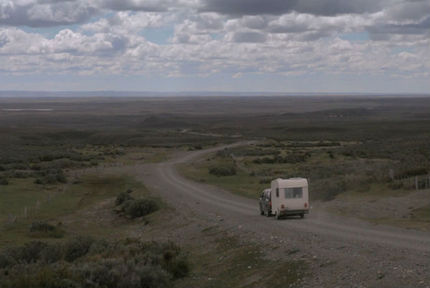 There are documentaries out there made to put forward a choice or a point of view, films made to make a statement on what we do as a society. Some of them even try to do something to change the portion of society that it is trying to portray. I even like some of them.

I mean, when they started, they were well done and well constructed think-pieces; they represented someone's POV; they were auteur pieces, like the films of Michael Moore, that whatever position you stand on, must still be applauded as movies that are well constructed and edited in a powerful way, with great scripts and means to convince you.

But, personally, I think there's been an abuse of the kind of narrative and visual style that was installed by filmmakers like Moore or Morgan Spurlock (and even he, lately, has been abusing his own style), and every documentary filmmaker seems to want to make an "important statement" whenever they delve into the genre, specially when it comes to an "important issue."

They already have a predisposition, may it be for or against, a certain ecological or social issue, and while that is positive, to have that point of view, it shouldn't be as blunt as they make it out today. Pointing and making everything just to put their point forward, they never ever make it possible for the defending side to make a statement.

Cue in Beaverland (Los Castores) a film about an ambient crisis: beavers are taking over the Chilean Patagonia, making dams, deviating rivers, destroying millennial trees, making the land unusable for pastures, growing trees or crops. In one moment of the movie, we see the damage that the foreign colony of beavers is doing is bigger than that of man-made dams or even mining operations in the same zone, like three or even five times bigger, depending.

The government of Chile isn't taking into account the risk of what is happening, so a couple of biologists go out of their way to investigate the issue and to do what has to be done with a plague: they have to kill the beavers. With that harsh premise, we can also see that there's already a point of view; the filmmakers want to see that the plague is taken care of, as they side with the biologists and the people around who are being affected by the animals.

But at the same time, the directors don't shy away from any element that would undermine their efforts in any way. We see how the people who are complaining against the beavers are mostly higher class, rich countryside people who only see the loss of profit in the incident. Then, there's the long scene in which they find a dead beaver and dissect it. Or the constant sequences of one of the biologists trying to shoot a group of beavers with a rifle.

So, whenever there's a great argument for the disappearance of the beavers in such a fragile ecosystem, we find ourselves appalled at some of the things that the people do in order to bring that foreign animal commune down. We even see the pair of biologists kill and then cook a beaver, just to try how it tastes, and they find it tastes quite fine! The documentary does linger in those moments, as if to give an opportunity for the discussion and the controversy to start.

This documentary won the Jury Prize for the Best Chilean Film of the Valdivia Film Festival, and I can't think of a better winner right now. This is a complex movie that brings forward more questions and discussions than a total answer or point of view, even if the filmmakers end up noticing that the beavers are a plague that should be exterminated. It is among the best Chilean films of the year and the best documentaries of the year. It is an unusual find that should be searched for and seen by any fan of documentaries.

Do you feel this content is inappropriate or infringes upon your rights? Click here to report it, or see our DMCA policy.
ChileDocumentaryAntonio LucoNicolás MolinaPablo CarreraWestern