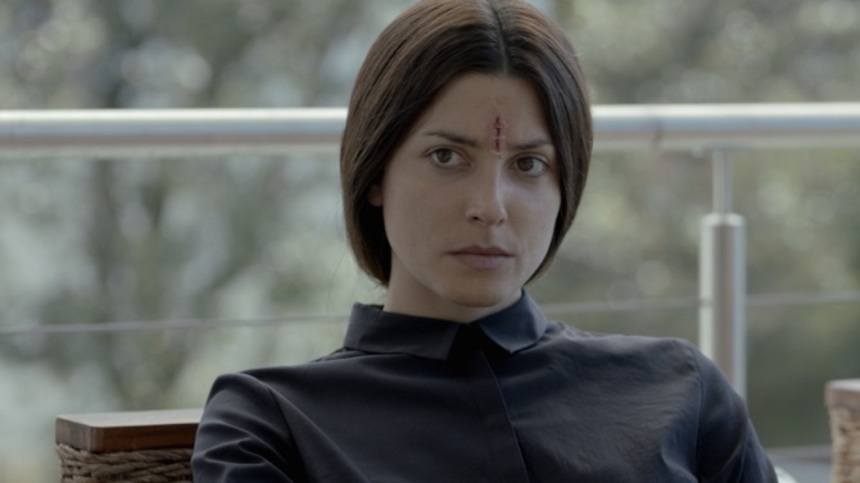 Carlos Vermut's second feature Magical Girl recently won the Golden Shell at the a Sebastian Film Festival, as well as best director award, and deservedly so.

Fun and disturbing, strange and yet somehow entirely plausible, the film tells the story of three different groups of people and their random connections, and how those connections lead to disaster. While it can be inferred as a commentary on and metaphoric examination of the current Spanish economic crisis, its richness and off-kilter tone and perspective have deeper meanings.

Alicia has leukemia, and all she wants it to make it to her 13th birthday, and have a very expensive dress inspired by her favourite anime character, "Magical Girl Yukiko". Her unemployed father, Luis, will do anything to make her wishes come true. As he is about to rob a jewellery store, he meet Barbara as she vomits over her balcony and onto his shoulder; she has her own secrets and problems, and their encounter takes an unexpected turn that could lead to Luis' salvation. In the meantime, an elderly man, Damien, is being released from prison, and his biggest wish is not to see Barbara.

There are definitely shades of Ozu Yasujiro in the film, at least in the beginning. The film opens with a scene in a classroom, a discussion of mathematics and a magic trick that is as clean and precise as a Japanese tea ceremony, and the inital story of Alicia's illness and Luis' desperation seem to point in the direction of a family drama. Both these, the precise and the magical, are the key to understanding the odd yet intriguing story. As anyone who has seen Vermut's first film, the amazing experimental feature Diamond Flash can predict, things turn ugly in a most darkly comic way. Vermut achieves this effect by keeping the audience just slightly outside of the situation. Indeed, this initial family drama is more of a stage setting for the story at the heart of it: Barbara, her past in work of a sexually dangerous type, her emotionally abusive marriage, and what she has to sacrifice in order to keep her husband from finding out about her indiscretion.

The film then moves into what could be called a noir thriller, but Vermut never allows for standard genre semantic conventions. While the narrative of most thrillers involve a character doing wrong for own gain, in Magical Girl, the characters are motivated by sacrifice. Luis is willing to sacrifice his morals to make his daughter happy; Barbara is willing to sacrifice her body for her husband; Damien is willing to sacrifice freedom for Barbara. Their actions to enact these sacrifices border on laughably crazy, but that is the point. Extreme situations cause extreme action, and Vermut presents his characters almost entirely in full daylight, even though their exposure to scrunity doesn't stop them. An accident gives Barbara a cut in her forehead where her 'third eye' would be; this cut serves as both damage to her own sense of morality and self-care, and as a horrific and damaged eye upon the other characters, twisting their own actions.

The economic crisis in Spain has seen massive unemployment, a canyon-sized gap between the rich and poor, and a lack of any sensisble measure on the government's part to help the situation. Luis and Barbara straddle these two sides, annd while Luis might have the audience's sympathy at first, his blackmail of Barbara quickly loses it; just because she has money, that doesn't mean she should be taken advantage of, or that she might not (as the film shows) have to take far more extreme and dangerous measures to survive. And indeed, it is the women - Alicia with her terminal illness and Barbara with her bodily damage - who bear the brunt of the troubles and majority of the pain, both physical and emotional.

That Vermut presents his film with clean lines and angles, a generally bright mise-en-scene, and an overlack lack of extremes of wealth or poverty in the sets, is a deliberate and marked contrast to the depth of emotion and pain in the story. The brightness and ritual precision augment the drive the dark absurdity of the tale even more. Despite appearances, all of the main characters are victims of almost impossible circumstances; their extreme reactions are a rebellion against those circumstances.

Vermut's greatest strength is his ability to circumvent traditiona genre expectations, contrasting a drama-noir story with a perplexing and comic tone that showcase a new approach to cinematic language, one in which such genre conventions can be blended to superb effect. Absurb yet oddly realistic, funny, strange and unnerving, Magical Girl finds a perfect balance between that which can be quantified and that which cannot.

Do you feel this content is inappropriate or infringes upon your rights? Click here to report it, or see our DMCA policy.
Carlos VermutMagical GirlreviewJosé SacristánMarina AndruixRaimundo de los ReyesLucía PollánDramaThriller