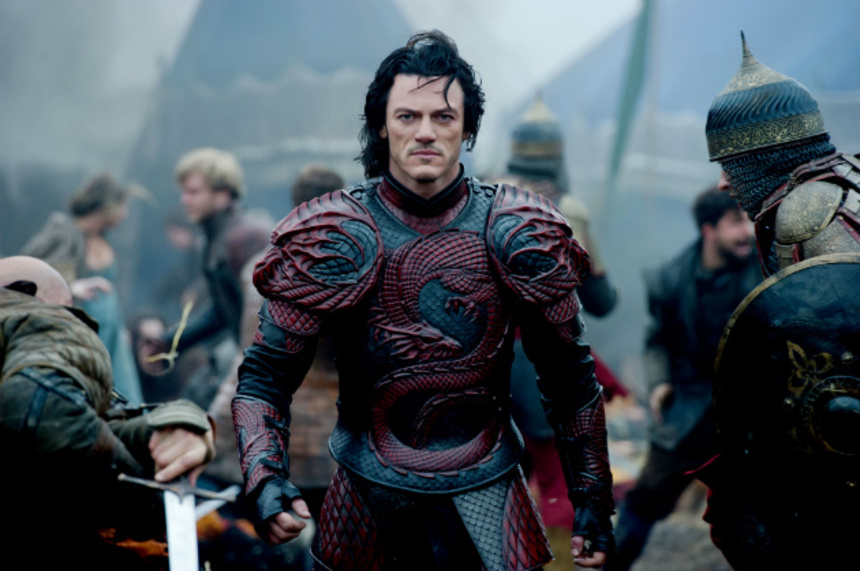 Surprisingly effective, the latest iteration of the Dracula legacy seeks to rebuild vampire-movie mythology by going back to the beginning.

First published in 1897, Bram Stoker's novel inspired F.W. Murnau's unofficial adaptation Nosferatu in 1922, which then sparked a series of stage plays, one of which served as the more direct source for Tod Browning's Dracula in 1931.

That movie entranced moviegoers with a startling vision of an elegant, bloodsucking vampire, following in the footsteps of earlier horror productions from Universal Studios. Though it plays somewhat flat and dry today, it established characters -- and character traits -- that Universal copied in subsequent editions, establishing a fair portion of the monster movie mythology that it is now seeking to reboot.

Serving as a prologue -- or "origin story" -- Dracula Untold presents Vlad Tepes, aka Vlad the Impaler (Luke Evans), as a prince, warrior, and family man in the Middle Ages. He rules his small kingdom of Transylvania with a kind hand, enjoys a comfortable marriage with his beautiful and supportive wife Mirena (Sarah Gadon), and dotes on his son Ingeras (Art Parkinson).

Vlad has maintained peace and tranquility for years, in part through a treaty with the neighboring, war-mongering nation of Turkey. But Turkey is evil, through and through, and Sultan Mehmed (Dominic Cooper) demands that Transylvania hand over 1,000 young men under the age of 18, including his own son, with the idea that they will be trained as soldiers in service of the Sultan. Having undergone the same thing himself, Vlad is repulsed by the Sultan's demand. Knowing that his tiny kingdom cannot defeat Turkey's mighty armed forces, however, Vlad reluctantly turns toward a secret supernatural force, hidden away in Broken Tooth Mountain, in order to protect his countrymen -- and his family.

Eventually, Dracula Untold picks up steam and reveals a greater variety of tones, including some much-needed comic relief, as well as undertones of melancholy and great yearning, which tie it, however tenuously, to some of the best depictions of Dracula on screen. Like an overeager child, it embraces a variety of non-traditional lore for a vampire movie, which ties it to modern superhero movies. Yet it feels like a stodgy drag until then, and the inertia is difficult to shake off. 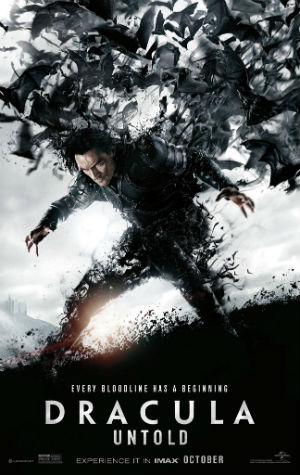 Matt Sazama and Burk Sharpless, who wrote the screenplay, spend an inordinate amount of time setting up the story, although far less attention is paid in the finished production to supporting characters, which drains much of the juice that's needed to spice things up. Once Vlad gets a taste of the supernatural, his giddy delight becomes palpable, and the adventure becomes more engaging, but it's almost a case of too little, too late.

The third act of the movie is the strongest, even though it, too, falls prey to the modern action-movie aesthetic of quick cuts and tight angles that confound clarity. Still, it pushes the emotional family connections to new depths of anguish, and aims for poignancy.

Making his directorial debut, Gary Shore sticks to a dark, inky palette, well-photographed by John Schwartzman, a veteran cinematographer. It's so dark, however, that it appears nearly monochromatic, at least in the AMC multiplex theater auditorium where I saw an advance screening. If intentional, it's a stark choice that, unfortunately, sucks away some of the color that's needed for a modern action-adventure picture.

Even setting that issue aside, the decision to pare away establishing notes for the supporting characters, as mentioned above, detracts from the notion that the movie is intended as something other than a straightforward origin story. Luke Evans is fine as Vlad, and the rest of the cast follows his lead, furthering the tone of decent respectability that dominates. I was never bored by the proceedings, but neither was I truly enthralled.

Smart, narratively speaking, in ways that step too far into spoiler territory to discuss, Dracula Untold weighs in as an average drama with above-average moments that reach for something more elegant and piercing than expected. It falls short, but it still provides a thoughtful, modestly enjoyable ride.

The film opens wide throughout the U.S. and Canada on Friday, October 10. Check local listings for theaters and showtimes.