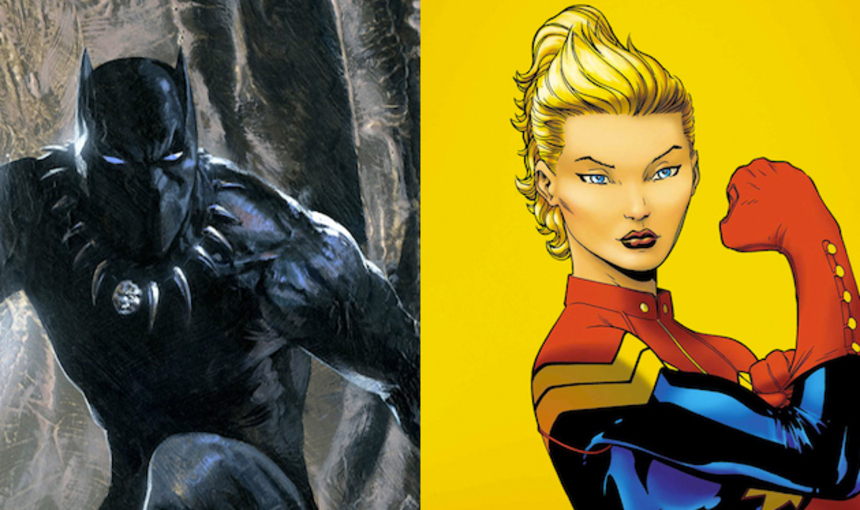 Not to be outdone by the recent announcement from DC/WB about their post-Batman v. Superman slate, The House Of Ideas and The House Of Mouse unveiled this morning at El Capitan in Hollywood the full Phase 3 lineup for the Marvel Cinematic Universe. And while it includes no titles or characters that have not been rumored to no end already, it is indeed a whopper.

Marvel Studios head honcho Kevin Feige took to the stage, laying out the Phase 3 blueprint for press and industry film by film. Titles and dates are...

Perhaps the biggest news to come from this is as follows: Chadwick Boseman (42) will be playing Black Panther, who will first make an appearance of some kind in Captain America: Civil War. Perhaps even more exciting is that longtime comics fave Captain Marvel/Carol Danvers is getting her own solo film, sandwiched between the Avengers two-parter, which promises to bring together the cosmic and earth-bound Marvel heroes. While it's a no-brainer that Marvel would do solo movies starring a minority and a woman after DC announced Cyborg and Wonder Woman, it is nice to see this moving ahead full-steam.

While Doctor Strange was present on the slate, Marvel did not announce Benedict Cumberbatch as the star, something that Deadline had seemingly all but nailed yesterday.

As for the Inhumans... while more widely known to comics fans than say the Guardians were prior to their big screen adventure, the group is still a relative Marve Deep Cut. As I understand it, the Inhumans is Marvel's way of doing an X-Men type story without the X-Men. As the Inhumans' basic story goes: The Kree (the alien race to which Ronan the Accuser from Guardians is from) began to experiment on early homo sapiens, which resulted in a genetically advanced race called Inhumans. Over time the inhumans, living separately and largely secretly on Earth, began to experiment with a mutagenetic mist. This not only unlocked powers, but also deformities and genetic defects. The original inhumans led by their king, Black Bolt, live by a rigid caste system based on what kind of powers individuals gain.

While I'm familiar enough with Black Bolt and company by look (60s Jack Kirby out-there hipness), I was never a kid who understood the appeal of Inhumans lofty, royal, out-dated story stuffs. But Feige stated that we'd be seeing some Inhumans sooner than we think, which makes it pretty clear that in the MCU Quicksilver and Scarlett Witch are Inhumans and not mutants. Which means a whole lot of characters and new franchises could get origins explained away with this alta-mutant angle. If that's the case, this makes me mighty curious for Phase 4.

Now, briefly: Thor: Ragnarok will take place immediately after Avengers: Age of Ultron. It's supposed to educate the world on what the word 'Ragnarok' means (hint: it's not good!). And yes, Tom Hiddleston will return as Loki. Captain America: Civil War, for those that don't read other film sites too often, will focus on a falling out between Iron Man and Cap over new government sanctioned programs that target super powered beings. Robert Downey Jr. is opting to co-star here instead of headlining another Iron Man solo film.

So there ya have it. While I'm sure there are all sorts of rumors flying about what a two-part Avengers could mean for the team roster (IE actor contracts), I'm just not educated enough to guess on all the variations. That's why you should feel free to light up the comments below -- have fun.

Do you feel this content is inappropriate or infringes upon your rights? Click here to report it, or see our DMCA policy.
black panthercaptain marvelmarvelmarvel cinematic universemarvel comicsmcu